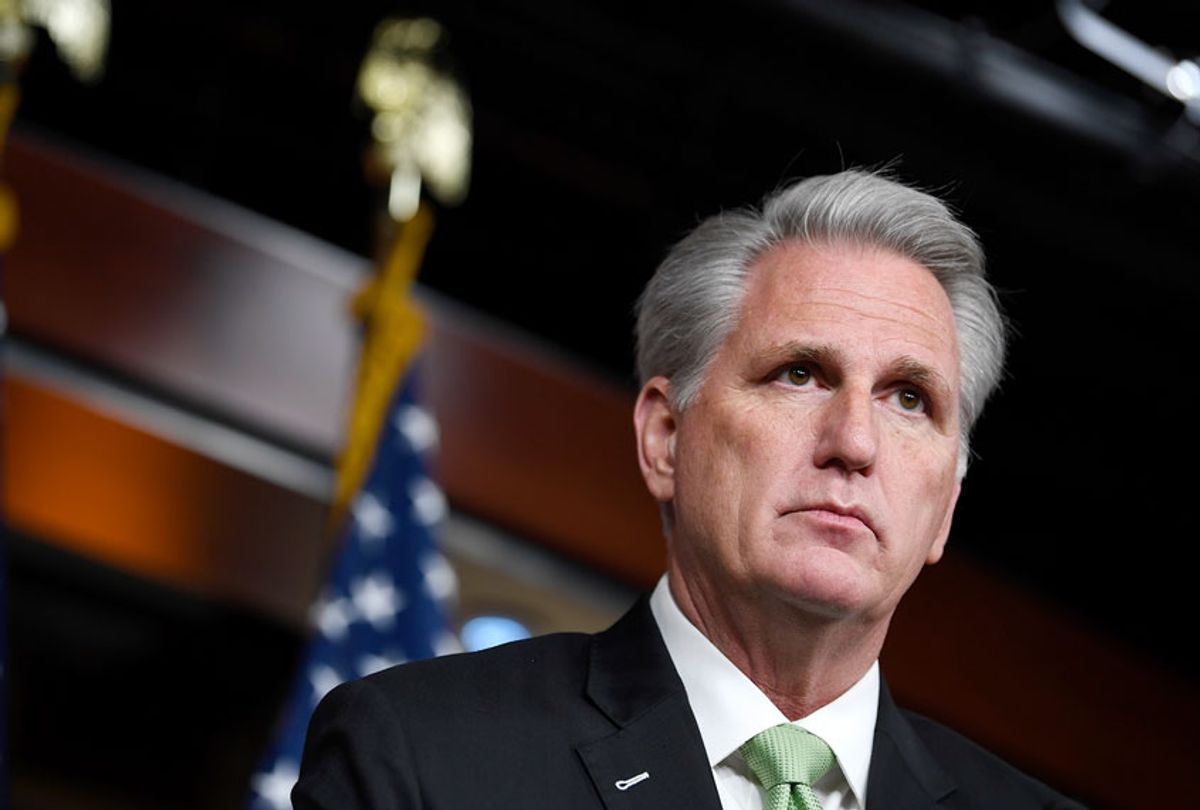 House Minority Leader Kevin McCarthy, R-Calif., has so far resisted calls to apologize for a racist tweet that referred to COVID-19 as the "Chinese coronavirus."

Monday's tweet promoted a link about the virus from the Centers for Disease Control's website alongside this comment: "Everything you need to know about the Chinese coronavirus can be found on one, regularly-updated website."

Speaker of the House Nancy Pelosi, D-Calif., demanded an immediate apology from her colleague across the aisle.

"Bigoted statements which spread misinformation and blame Asians and the Asian American community for #coronavirus make us all less safe," Pelosi tweeted. "@GOPLeader must delete this tweet and apologize immediately."

Brittany Martinez, a spokesperson for the minority leader, suggested that his racist language somehow held China accountable for its handling of the outbreak.

"We must be honest with China's severe lack of transparency," Martinez told The San Francisco Chronicle.

But because COVID-19 is no longer confined to China, it is not inappropriate to refer to it as the "Chinese coronavirus," CDC director Robert Redfield told members of the House of Representatives during a Tuesday hearing.

Rep. Judy Chu, D-Calif. — who chairs the Congressional Asian Pacific American Caucus — said in a statement that "calling the 2019 novel coronavirus the 'Chinese' or 'Wuhan' coronavirus is as descriptive as calling it the 'CPAC coronavirus' — that is to say not descriptive at all. Worse, it's harmful.'' (Two members of Congress self-quarantined after being exposed to an individual with the virus at the annual Conservative Political Action Conference.)

"Calling it the 'Chinese coronavirus' isn't just racist," the senator from California tweeted. "It's dangerous and incites discrimination against Asian Americans and Asian immigrants."

Salon reached out to an Asian American advocacy group for further comment on McCarthy's quote.

"Kevin McCarthy's comment was racist," Margaret Fung, executive director of the Asian American Legal Defense and Education Fund, said Wednesday in an email. "The term 'Chinese coronavirus' is racist, because it blames China and the Chinese people for COVID-19, a disease that can affect all people regardless of their race. With rising fears and anxiety over the COVID-19 outbreak, it's inexcusable for GOP leader Kevin McCarthy to engage in racial labeling, instead of focusing on solutions to this public health crisis."

She added, "The stigma of coronavirus has resulted in hate violence against Asian Americans on sidewalks, subways, schools, and other public places. Chinese restaurants and other Asian businesses are losing customers due to fears of coronavirus. The incidents of anti-Asian racism since the COVID-19 outbreak are too numerous to list here."

The Sacramento Bee editorial board also condemned McCarthy's tweet, writing Tuesday that "comments such as McCarthy's can only help intensify the resurgence of xenophobia against Asians. In the wake of the coronavirus, Chinatowns have become ghost towns and Chinese restaurants – including many in Sacramento – have reported decreased business. That's because of attitudes like McCarthy's, which appear to wrongly conflate the virus' origin in Wuhan, China, with Chinese and Asian people in general."

Rep. Paul Gosar of Arizona, one of the members of Congress who self-quarantined after CPAC, is is also in hot water over a racist description of the virus. After referring to COVID-19 as the "Wuhan virus" in a Sunday tweet, MSNBC anchor Chris Hayes replied that his rhetoric was "astoundingly gross."