Lessons for governors facing the coronavirus: How to lead in a time of crisis

Before he became a Trump sycophant, Chris Christie offered an honorable example in the wake of Hurricane Sandy 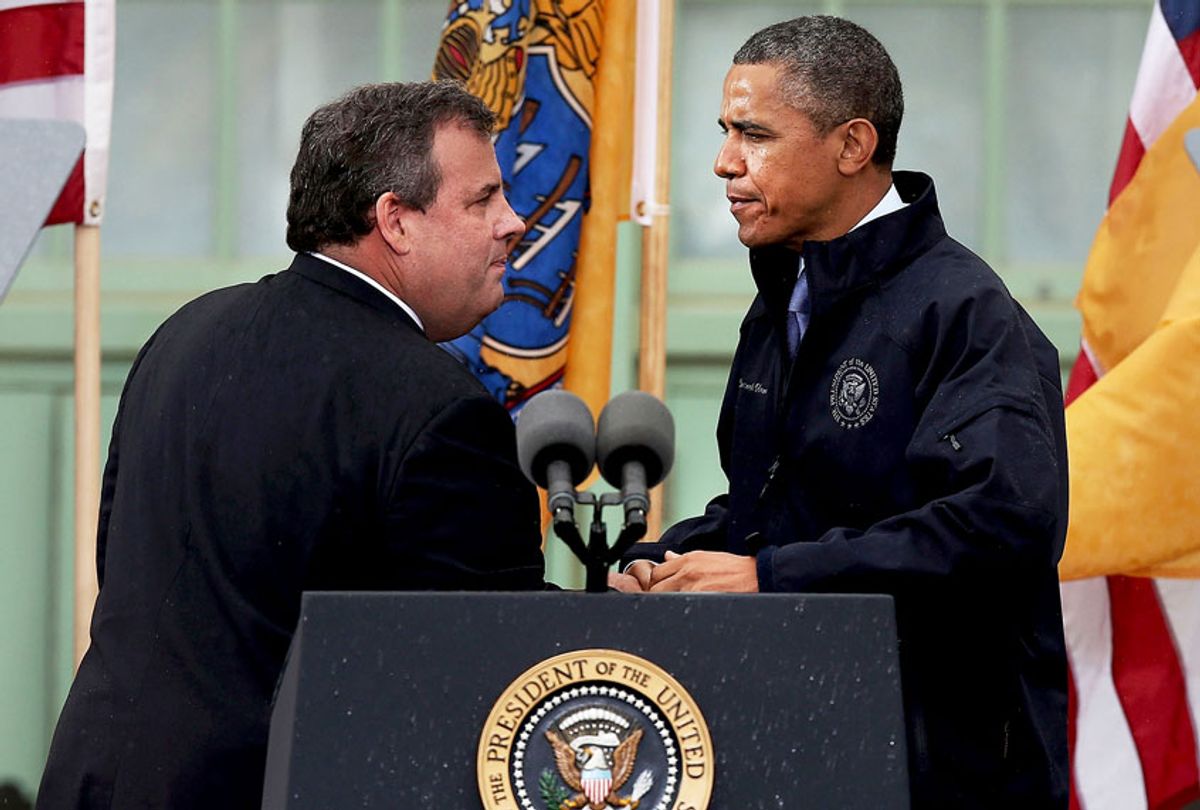 President Barack Obama stands with New Jersey Gov. Chris Christie before speaking to crowds along a rain soaked boardwalk on May 28, 2013 in Asbury Park, New Jersey. Seven months after Superstorm Sandy devastated the region, President Obama declared that the Jersey Shore is back in an appearance with the governor. (Spencer Platt/Getty Images)
--

Military history is a great teacher that has application to all human endeavor. History is littered with the carnage caused by generals who threw their troops into battle without a clue about the facts on the ground because their ego eclipsed their judgment.

The stakes are every bit as high with the kind of large-scale efforts to protect the public health that Phil Murphy and Andrew Cuomo, the governors of New Jersey and New York, are now engaged in as they lead our nation's most densely populated region through the coronavirus challenge.

A public health crisis on this scale requires Cuomo and Murphy to make significant judgment calls informed by real -ime conditions on the ground, in the transit system, in the financial markets, on the streets, our hospitals, in our schools and in the privacy of all our homes.

In the jargon of the "table-top" exercise, this is what we call situational awareness. Every assumption has to be challenged. All "facts" must be vetted through the deceptive question, "How do we know what we know?"

Having that kind of first-hand awareness in the immediate aftermath of Hurricane Sandy in 2012 earned former New Jersey Gov. Chris Christie an enduring and well-earned footnote in history. If part of Christie's legacy will always be his sycophantic relationship with Donald Trump a few years later, this is another part. Amid the crisis posed by Sandy, he demonstrated that the most important thing is knowing how to listen deeply.

In the case of Sandy, Christie had a willing federal partner in President Barack Obama. Because Christie, at some personal risk to himself, went to the places where people were most acutely hurt by the unprecedented destructive power of that storm, he could impart their circumstance to the media, the nation and its political leadership.

I saw the importance of Christie's strategy first-hand when I was working for WNYC, New York's major public radio station. I was assigned to take a National Guard helicopter into Sayreville, New Jersey, on the morning after Sandy and provide the national audio feed to document Christie's tour of working-class  homes that had been decimated by the wall of water wrought by an unprecedented storm surge from Raritan Bay.

I will never forget the collective sound of so many women crying as we walked through the soaked detritus that had been the cherished personal possessions of families who were hit with an Old Testament-scale calamity we did not see coming.

What was essential was that Christie gave these people a sense that they were not alone. That proved tough to sustain as days turned into weeks and weeks into months, and as state and federal bureaucracies failed to rise to the challenge.

There was anger from some storm victims who had been critics of New Jersey's local land use decisions, which resulted in the paving over of wetlands and filling of marshes as commercial interests trumped environmental concerns.

Cataclysmic storms and virus outbreaks catch us the way we live. They reveal in real time just how vulnerable we always were to risks we failed to perceive — because we had arranged our defenses to face the tribulations we have already endured.

So for decades we have borrowed trillions of dollars to pay for a military-industrial complex to wage wars we hoped we would never fight, while woefully underfunding the public health system needed to identify and treat an invisible enemy like the coronavirus.

We treated health care like just another consumer choice with options public and private. As state and local governments prepare contingency plans for large scale self-quarantine, we are learning the hard lesson that our personal biology is linked to the circumstances of all those around us.

If they are well, regardless of their ability to pay, all of our odds improve. Such a recalibration of our foundational societal assumptions is required to face up to the challenges of climate change that are already upon us.

In the current crisis, Murphy and Cuomo are handicapped by a president who appears incapacitated by a form of malignant narcissism. He seems incapable of hearing or comprehending communications from other people.

That's really bad news for a commander in chief, and for the the nation he took an oath to protect and "defend from all enemies foreign and domestic."

In essence, what we have is a form of decapitation — yet the president is still alive, talking and taking up critical space at the top of his self-serving chain of command. As long as this is all about him, there is little oxygen at the top for an effective response.

As a result, governors and local officials now dealing with the coronavirus pandemic were handicapped by months of federal government delay in recognizing the threat that first surfaced in China in December.

Luckily for our nation, we have a deep bench of honorable state executives, like Gov. Jay Inslee of Washington, where the coronavirus has already claimed the most lives. Our president has described him as a "snake."

Like Murphy and Cuomo, Inslee believes in science and understands the nature of the covenant between someone elected to high office and those who elevate them. Remember the phrase politicians used to utter, once upon a time? It's an honor to serve the people.

These governors all lead large peacetime armies of civil servants who put their lives on the line every day to protect and defend the public. They can't telecommute from home.