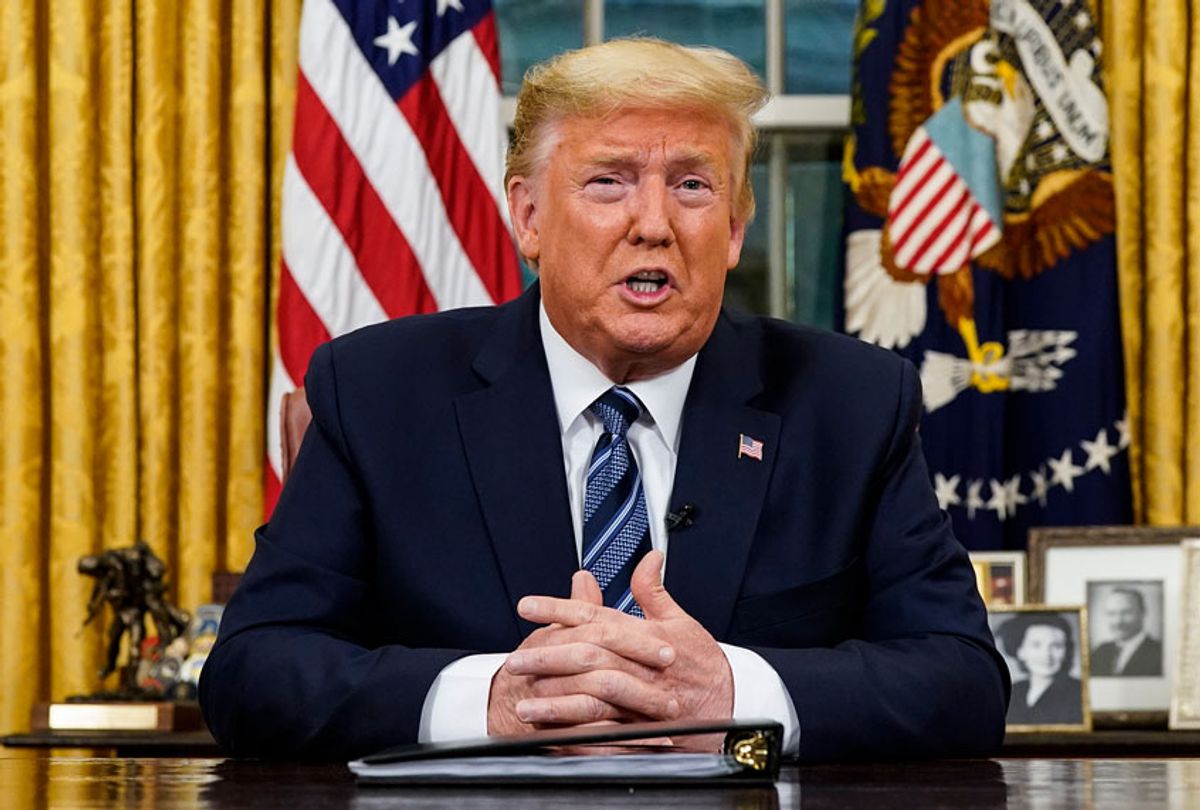 President Donald Trump speaks in an address to the nation from the Oval Office at the White House about the coronavirus Wednesday, March, 11, 2020, in Washington. (Doug Mills/The New York Times via AP, Pool)
--

President Donald Trump announced a ban on travel from Europe in a surprise Oval Office address on the coronavirus Wednesday before walking back key parts of the scripted speech.

Trump announced a 30-day ban on travel from 26 European countries but exempted the U.K. and Ireland, where he owns golf resorts that are reported to be "struggling financially." The president did not explain why he excluded the U.K., which has 460 confirmed cases of COVID-19, including the country's health minister.

The ban, he said, "will not only apply to the tremendous amount of trade and cargo, but various other things as we get approval. Anything coming from Europe to the United States is what we are discussing."

Trump also announced that insurance companies "have agreed to waive all copayments for coronavirus treatments."

The announcement sent stock futures reeling and sparked chaos at European airports as Americans scrambled to arrange travel home before Friday's deadline. The E.U. condemned the ban, which it said Trump imposed "unilaterally and without consultation." The announcement "confounded many European leaders," who were "scrambling to play catch-up to understand the reasoning behind the ban," The Washington Post reported.

Vice President Mike Pence denied that "there was confusion" over the announcement in spite of the statement from European officials.

But Trump and his advisers rushed to walk back key parts of the president's remarks moments after his speech concluded with a hot mic moment that caught him dropping the F-bomb.

Minutes after saying that "cargo and trade" would be included in the ban, Trump tweeted that "trade will in no way be affected" by the ban. "The restriction stops people, not goods," he added.

The White House said the president "misspoke" when he read the prepared statement from his teleprompter verbatim.

The ban on people was not exactly as he said either. Acting Deputy Homeland Security Secretary Ken Cuccinelli clarified on Twitter that the ban did "not apply to American citizens or legal permanent residents or their families."

The ban itself came under criticism from Tom Bossert, Trump's own former homeland security adviser.

"There's little value to European travel restrictions. Poor use of time & energy," he tweeted. "Earlier, yes. Now, travel restrictions/screening are less useful. We have nearly as much disease here in the US as the countries in Europe. We MUST focus on layered community mitigation measures-Now."

The head of the World Health Organization said "travel restrictions can cause more harm than good by hindering info sharing, medical supply chains and harming economies."

The announcement did little to calm markets. The Dow Jones Industrial Average plummeted by nearly 1,700 points Thursday, triggering the second temporary trading halt this week. The Dow is down about 21% since Trump's top economic adviser Larry Kudlow insisted that COVID-19 was "contained" and urged investors to "buy the dip."

Though Trump has tried to put a positive spin on the spread of COVID-19, the situation has continued to worsen as the U.S. badly lags behind other nations in testing for potential cases. The CDC has reported about 11,000 tests since the first case was confirmed seven weeks earlier. South Korea, on the other hand, is testing about 10,000 people per day.

The number of confirmed coronavirus cases surpassed 1,200 Wednesday and has affected 44 states and Washington. At least 37 patients have died from the virus. Experts believe there are hundreds of other undiscovered cases. The majority of the cases have been in Washington state, California and New York. The World Health Organization declared COVID-19 a pandemic on Wednesday after the virus infected more than 120,000 people and killed more than 4,300 people in at least 114 countries.

The National Basketball Association announced it will suspend its season after one of its players tested positive for the virus. The NCAA announced that its March Madness games will be played without fans in the stands.

A number of high-profile cases have also sparked concern. Canadian Prime Minister Justin Trudeau said he is self-quarantining while his wife is tested for COVID-19. Actor Tom Hanks and wife Rita Wilson became the most famous people to test positive for the virus. A staffer for Sen. Maria Cantwell, D-Wash., tested positive as well, prompting some offices on Capitol Hill to close. Congressional leaders later announced that the Capitol will be closed to public tours until at least the end of March.

COVID-19 also threatens to upend the presidential campaign. Both former Vice President Joe Biden and Sen. Bernie Sanders, I-Vt., were forced to scrap their rallies in Ohio on Tuesday over health concerns. The Biden campaign said it will hold virtual events instead of live rallies in the coming days. Sunday's debate scheduled to take place in Phoenix has been moved to Washington to reduce travel. The debate will have no live audience.

Trump was forced to cancel upcoming events in Colorado, Florida and Nevada as a precaution. There have been growing concerns over the president's health after a number of Republican lawmakers, who were potentially exposed to COVID-19 at CPAC interacted with the president before announcing they would self-quarantine. A Brazilian official who met with Trump last week at Mar-a-Lago tested positive for the virus Thursday.

Governors across the country have banned large public gatherings and at least 19 states have declared states of emergency. The State Department urged Americans to avoid foreign travel Wednesday

Trump, meanwhile, has pushed back on pressure from health officials to declare a public health emergency.

"There's no deadline for a decision, but one of the people familiar with the talks said the task force will not give Trump its final verdict until Jared Kushner, the president's senior adviser and son-in-law, finishes his research and comes to a conclusion himself," Politico reported Wednesday.

Trump and Republican lawmakers have also balked at a COVID-19 package introduced by House Democrats on Wednesday, which would expand unemployment insurance, paid sick leave, and add funding for free COVID-19 testing.

"Unfortunately, it appears at this hour that the Speaker and House Democrats instead chose to produce an ideological wish list that was not tailored closely to the circumstances," Senate Majority Leader Mitch McConnell, R-Ky., claimed Thursday.

Trump announced that he would not support the bill because it includes "unrelated issues." The White House has "serious concerns" is that provisions in the bill "don't reference the so-called Hyde amendment, which prevents the use of federal funds to pay for abortions," a senior administration official told Roll Call.

Speaker of the House Nancy Pelosi, D-Calif., said it was vital to "come together and get the job done" as soon as possible.

"We cannot fight coronavirus effectively unless everyone in our country who needs to be tested knows they can get their test free of charge," she said in a statement. "We cannot slow the coronavirus outbreak when workers are stuck with the terrible choice between staying home to avoid spreading illness and the paycheck their family can't afford to lose."