US may have already failed to contain COVID-19, experts say 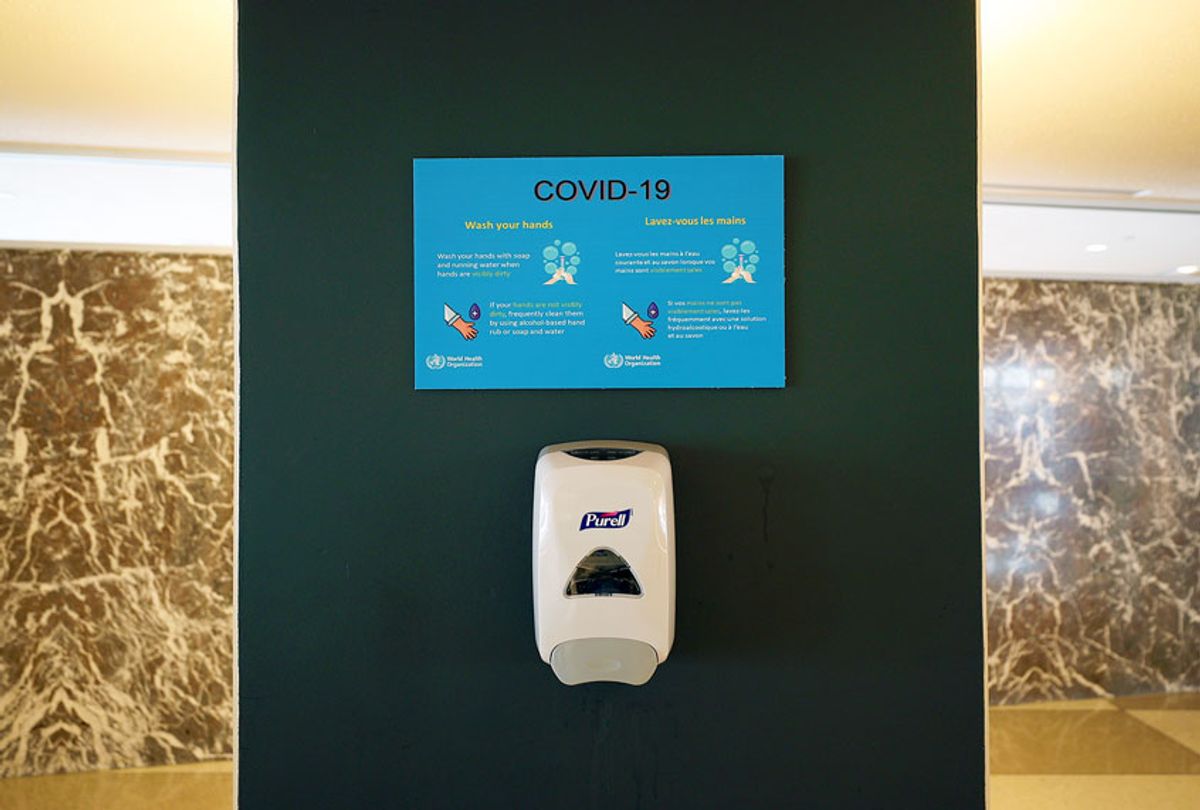 A disinfectant hand sanitizer is seen at United Nations Headquarters after it closed to the public "out of an abundance of caution" because of the spread of the novel coronavirus (COVID-19) in New York, United States on March 11, 2020. (Tayfun Coskun/Anadolu Agency via Getty Images)
--

As the novel coronavirus spread in China, the United States had more than a month to observe and prepare for a potential outbreak here. Yet in that span, the government seems to have dragged its heels, especially in terms of preparing and readying a means of testing for the virus. Now, the American public is confronted with the frightening reality that the public is unable to accurately gauge the situation because critical information — like the shortage and delay in tests — make it impossible to know what's going on. How can we know how many people have COVID-19, and where it is spreading, if access to testing is severely limited?

That uncertainty has led some experts to speculate that the true number of cases of COVID-19 is far, far higher than known.

According to the Centers for Disease Control and Prevention (CDC), the novel coronavirus has infected more than 1,215 people and has killed at least 36 in the United States. According to the European Center for Disease Prevention and Control, the number of cases in the U.S. is 1,312. Yet many medical and public health experts suspect the number of cases is much greater. Two weeks ago, experts at Cedars-Sinai Medical Center in Los Angeles, California speculated that 9,000 Americans had come down with the novel coronavirus. Today, an Ohio health official estimated that there could be 100,000 cases in Ohio alone.

"I think that the number of reported cases is clearly an underestimate, but what I don't know is what the factor of that underestimate is," Dean Blumberg, chief of pediatric infectious diseases and associate professor in the Department of Pediatrics at UC Davis Children's Hospital, told Salon in an interview. "Are there twice as many cases, or 10 times, I don't know — that is what the widespread testing will tell us; if you don't want to know what's going on, it's a good strategy to not test anybody, but you need to test to know how prevalent it is in our community."

On Thursday, Dr. Anthony Fauci, director of the National Institute of Allergy and Infectious Diseases, admitted at the House Oversight and Reform Committee hearing that the U.S. is not equipped to handle the virus at the moment regarding testing.

"The system is not really geared to what we need right now, what you are asking for. That is a failing," Fauci said. "The idea of anybody getting it easily the way people in other countries are doing it, we're not set up for that. Do I think we should be? Yes. But we're not."

He was referring to the shortage of tests. According to the CDC, 11,079 specimens have been tested since January. However, as the BBC explains, the number of Americans tested is lower because patients usually provide two specimens for a test. To put it in perspective, South Korea is reportedly testing at least 10,000 people every day. Notably, the fatality rate for coronavirus in South Korea is 0.7 percent, while globally the World Health Organization has reported 3.4 percent, suggesting that widespread testing is important to containing the virus. In the United Kingdom, more than 29,700 people have been tested, and more than 1,000 tests are being carried out per day.

Why has there been such a delay in U.S. testing? It started with the CDC playing it too safe, which is essentially what led to the silent spread of COVID-19 in Washington. As we reported, the guidelines for testing were previously narrow, and the CDC only recommended testing for people who had close contact with COVID-19 patients, or those who had recently traveled to China or other countries facing outbreak. In other words, people who had, say, mild cases of the novel coronavirus and saw their doctor weren't tested for the virus because they didn't meet the CDC's testing criteria. It is likely that is still happening.

Christine K. Johnson, a professor of epidemiology and director of EpiCenter for Disease Dynamics at the University of California at Davis, explained to Salon earlier this month there are always pros and cons to making testing guidelines more or less restrictive. "If you make them too restrictive, you risk using up you resources, using all your testing kits and it's a very nonspecific disease, and unfortunately in cases like that you can overwhelm the diagnostic infrastructure," Johnson said.

Likewise, the delay relates to the regulations around creating a new medical test in the United States. As reported by the New York Times, new tests developed in private labs needed Food and Drug Administration approval, which is far from a speedy process. It was not until Feb. 29 that the federal government issued new rules to speed the process of testing. Moreover, private labs are reporting other barriers, from a lack in materials to a shortage in chemicals. It doesn't help that, in 2018, the National Security Council's global pandemic director left his post abruptly and the team was disbanded. Those positions have yet to be refilled.

That has led some experts to speculate that it may be too late in the U.S. to take meaningful action before we end up in a situation like Italy or China. At the beginning of February, only a handful of COVID-19 cases were confirmed in Italy. On February 23, the country had 76 cases confirmed; two days later that number increased to 229. Today, Italy has the highest number of cases — 12,462 — and deaths — 827 — outside of China. The rise has led Italian officials to implement unprecedented country-wide movement restrictions, for which police are issuing fines to people out in public without a good reason. Some believe these drastic measures could have been avoided if less drastic measures had been taken sooner. Science magazine noted that aggressive quarantine and crowd-limiting measures in China were effective in containing the outbreak in China.

On Wednesday night, President Donald Trump delivered a speech from the Oval Office announcing restrictions on European travel to the U.S., which will last "until terminated by the President." Blumberg told Salon it "doesn't make sense to close borders," at this point since we know that there is already community spread happening with COVID-19.

Indeed, city health officials are taking matters into their own hands by cancelling large events and restricting large gatherings, like concerts and festivals, measures that were implemented at the end of February in France and Italy. Sandro Cinti, a professor of infectious disease at the University of Michigan, Ann Arbor VA Health System, told Salon this is all part of "flattening the curve" — the concept of not necessarily stopping transmission, but slowing it down, which can allow more vulnerable people to get treated properly and lower mortality rates. Notably, Italian doctors had to triage patients because their healthcare system was so overburdened. Taking steps like cancelling university classes for the rest of the year is an attempt to keep that from happening in the United States.

"Mitigation is to help the most vulnerable people in our society," Cinti told Salon. "Even though in a whole college of kids, only one or two would be very sick, they will spread it to their families, old folks, teachers with hypertension, and those are the people who will end up sick."

"Flattening that curve is better for everybody," he said, adding that the lack of testing is still a problem, and that there is nothing we can do about it at this moment.

In the next couple weeks, Cinti believes that we will be in a different situation as more tests become available. According to the American Enterprise Institute, the United States has the capacity to test 22,325 people daily, as of Thursday afternoon. However, as reported by ProPublica, efficiency and the speed in which these tests are conducted are burdened by equipment and manpower challenges.