Hop aboard Netflix's chilling yet campy "Bloodride," a Norwegian "Twilight Zone" for today

From a mascot kidnapping to a bizarre animal-themed office party, these six stories offer gory if predictable fun 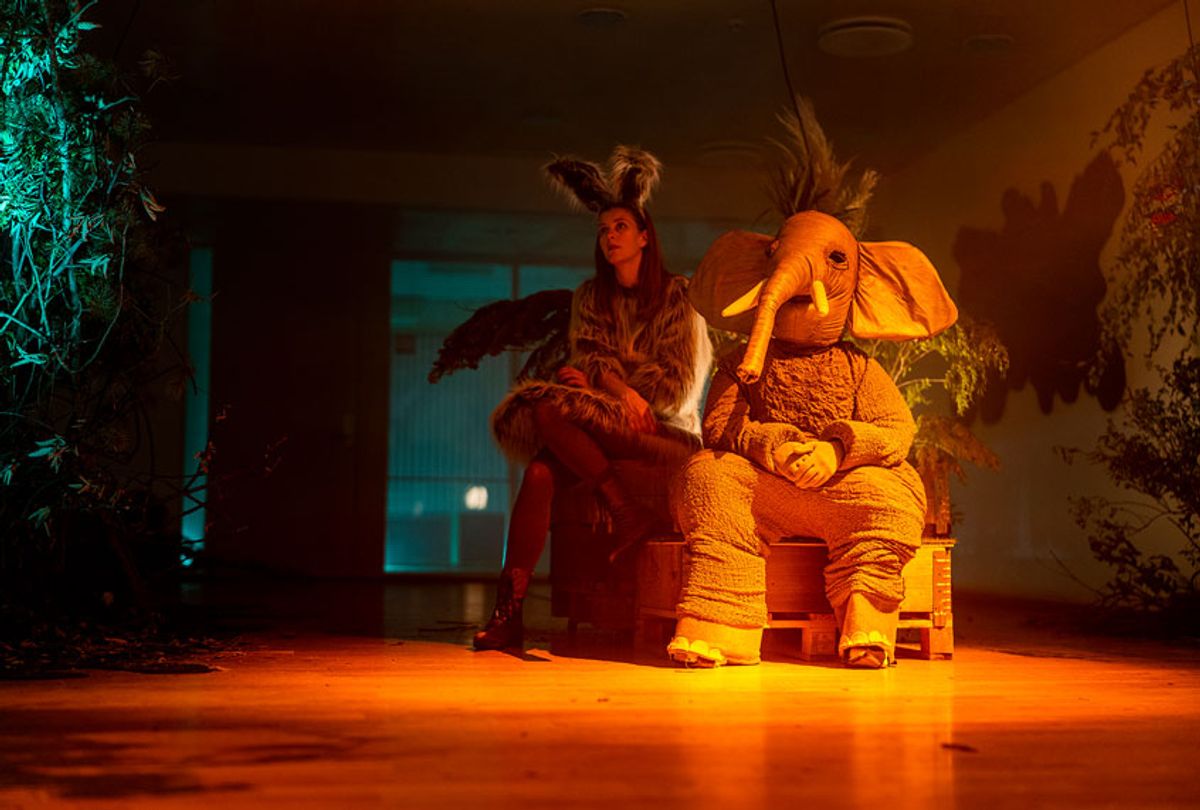 "Bloodride," Netflix's new Norweigan-language anthology series, is horror for the faint of heart. I mean this in the best way possible; sometimes you want something that makes your skin crawl, but stops short of making you jump out of it (you know, just a little psychological thrill, as a treat).

In the series, each episode starts by panning through a spectral bus, pausing first on the driver who knowingly smirks — you sense that he's ridden down this road before — and then on one of the passengers. Typically, after a few seconds, blood begins to slowly stream from one part of their body, and then we quick-cut to their individual story, often juxtaposing the blue and gray-scale bus interior with a bright, airy exterior shot.

Like other Netflix anthology series such as "Black Mirror" and "Love, Death and Robots," each of the six episodes is a standalone story that you can watch in any order. Other than in the introduction sequence, the characters don't interact with each other; their stories are completely independent of each other. Though, frustratingly, why they are taking this bus ride together, is never revealed. One could venture a guess at their destination  — the afterlife? some spooky alternate universe?— but no one answer emerges, although they do all share one thing in common that points to an obvious final stop.

In the first episode, "Ultimate Sacrifice," a woman named Molly (Ine Marie Wilmann), her husband, and daughter have moved to a major fixer-upper in the countryside after Molly maxed out their credit cards while living lavishly in the city. It's not Molly's ideal life, but hey, at least the neighbors seem nice? They arrive — dressed in breezy sundresses, stroking black cats — to welcome the family to the community, and offer to help get the house in order. Within an afternoon, Molly's home is completely transformed, though she's increasingly wary of the neighborhood.

Her suspicions are realized when she goes out for a jog in the surrounding woods and comes across two of her neighbors engaging in a bloody and disturbing practice they claim hearkens back to when a Viking community settled in the area. The result of honoring the tradition is money in their future (typically through winning lottery and scratch-off tickets), and of course Molly now knows how she can pay off her debt to move back to the city.

Often "Bloodride" falls into exactly these moments of predictability. Sometimes those set expectations are subverted — notably in the fourth episode, "Lab Rats" — but often the episodes feel like an episode of "Twilight Zone" dressed in a gory Halloween costume. But, as in that Rod Serling-created series, there's a sense in "Bloodride" that many of the characters are getting their just deserts.

Remember the episode, "Time Enough At Last," in which Henry Bemis, a far-sighted banker, wants nothing more than the time to read away from those who most annoyed him in life? After an atomic explosion, during which he is safely sealed in the bank's vault, he emerges to find everyone gone, but the public library still intact. Just as he bends over to read to heart's content, his glasses slip from his nose and break, rendering him essentially blind. While there are numerous themes in that episode, one is certainly that Bemis is punished for his antagonistic, antisocial behavior.

Now, imagine that instead of Bemis' glasses breaking, his eyes are gouged out by a crazed killer. It could then probably pass as a "Bloodride" episode. Throughout the series, the show's creators, Kjetil Indregard and Atle Knudsen, use characters like stuck-up students and a pharmaceutical industry titan (and his dinner party guests) to prod at themes like privilege, greed ,and ego. There are no jump scares, but there is some frighteningly accurate social commentary.

There's also visual gags that lighten up the episodes, like a blow-up pizza parlor mascot that gets kidnapped early in the series and, in the case of the final episode of the series, "The Elephant in the Room," a room full of coworkers who have gathered for an office party and are all in animal-themed costumes when one of their own mysteriously dies.

Inherent to that, there's a definite tone of dark humor that's really enjoyable — even if the writing and pacing of "Bloodride" enables you to already guess the punchline.

"Bloodride" is now streaming on Netflix.