Medicare for All would lead to job boom, experts say

Medicare for All would create millions of new jobs and boost wages for workers, Economic Policy Institute finds 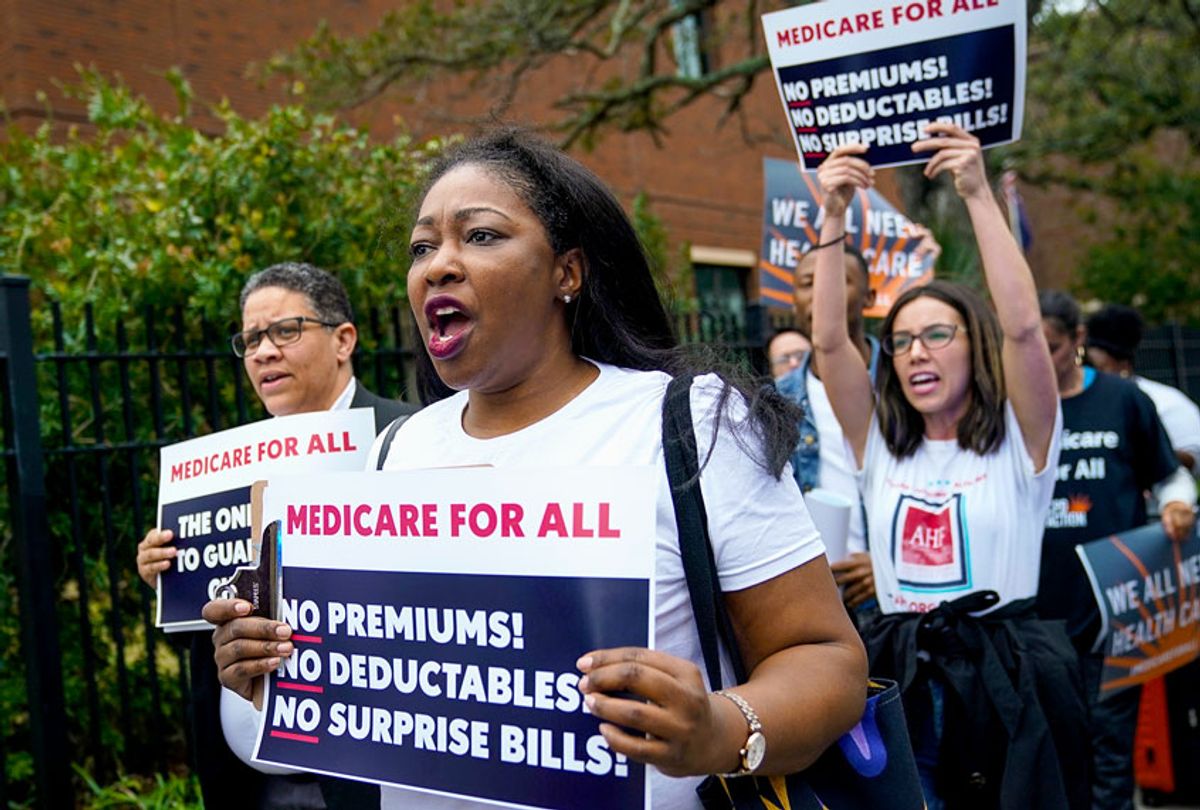 A Medicare for All health care system would create millions of new jobs despite critics' concerns that it would cause widespread job losses by eliminating the private insurance industry, according to a new analysis by the Economic Policy Institute (EPI).

The report arrives at an apposite moment in history, as the flaws of the United States' piecemeal, semi-private health care system have become more glaring as COVID-19 sweeps across the globe.

Opponents of the Medicare for All proposals offered by Sen. Bernie Sanders, I-Vt., and Sen. Elizabeth Warren, D-Mass., have argued that the plan would eliminate nearly 2 million jobs in the private insurance sector. But the analysis from EPI, a progressive think tank, found that a Medicare for All system would not only replace those jobs but also create millions of new ones.

More than 20 recent studies concluded that a Medicare for All system would cost less than the status quo. A recent study published in the Annals of Internal Medicine found that much of the added costs that Americans pay compared to nations that already have single-payer health systems comes from propping up the system itself. Roughly 34% of all health costs are spent on covering overhead — bloated salaries for insurance company executives and administrative costs — which comes out to $2,497 per person each year, about four times what Canadians pay.

The main reason that research consistently finds that Medicare for All would cost less than the current system is that it would eliminate about 1.8 million private insurance jobs, according to a recent estimate. But this would not "profoundly affect the total number of jobs in the US," EPI argued. While it is a significant number, American companies laid off 21.9 million workers in 2018 without any policy eliminating an entire industry.

"Our economy generates a huge amount of job churn every year," said Josh Bivens, EPI's economic research director. "This churn is the hallmark of growth in productivity — getting more economic output with fewer inputs. Relative to the scale of other gross measures of job churn, the churn associated with M4A [Medicare for All] is not large."

Spaced out over a four-year phase-in period, these job losses would add just 2% to the national rate of layoffs, the report noted, adding that there have already been 1.7 million layoffs over the past four years in the finance and insurance sectors.

Other economists have also argued that propping up these jobs is not a good reason to sacrifice affordable health care.

"Treating the health care system like a (wildly inefficient) jobs program conflicts directly with the goal of ensuring that all Americans have access to care at an affordable price," Harvard University economists Katherine Baicker and Amitabh Chandra said in a 2012 article in the New England Journal of Medicine.

But EPI found that Medicare for All would also go a long way in easing the pain from those job losses.

"Fundamental health reform that, like M4A, guarantees access to insurance regardless of one's current job status is a key part of making [job] transitions easier," Bivens wrote in the report.

In contrast, there are 6.4 million unfilled jobs in the US economy right now, according to the Bureau of Labor Statistics. Medicare for All would inherently "increase job quality substantially by making all jobs 'good' jobs in terms of insurance coverage and by increasing the potential for higher wages" by decoupling insurance from employment, Bivens writes.

And many of these workers, and those in billing and administration that could also be threatened with layoffs, would be able to find new jobs in an expanding health care sector, the report argues.

Past research published by the Political Economy Research Institute estimates that "expanded access to health care could increase demand for health services by up to $300 billion annually," Bivens wrote. "Given the current level of health spending and employment, this would translate into increased demand for 2.3 million full-time-equivalent workers in providing healthcare."

Beyond that, Medicare for All also expands coverage for long-term care.

Estimates show that Americans provided about 34 billion hours in unpaid long-term care in 2018.

"If this care was divided up among full-time paid workers, it would require 17 million new positions. Of course, not all of this currently unpaid care would be converted into paid positions in the job market," Bivens wrote. "But if even 10% of unpaid care translated into new jobs, it would create enough new demand for workers to essentially offset the displacement of workers in the health insurance and billing administration sectors."

So while overhauling the health care system may lead to some job losses, they are relatively small compared to the overall economy and many workers would be able to find new jobs in the same industry. Beyond that, Medicare for All would effectively double the number of "good" jobs available by providing every worker with health care, creating more choice for employees and boosting wages since employers no longer have to cover health insurance costs.

Increases in job quality and wages would also apply to the overall labor market. And universal health care would also reduce "job lock," in which workers stay in positions they do not like to keep their health coverage.

A 2015 review found that job lock reduces the rate of people leaving their jobs by 15 to 25%. Medicare for All would allow workers to seek out better matching jobs and start their own businesses. The United States ranks dead last in self-employment among the world's wealthy democracies at around 6%, while the rates in Europe consistently exceed 10%. Such a policy would also help small businesses hire workers since they would not have to offer health insurance to compete with larger companies.

"First, because health care is nearly universally provided in other rich countries, workers choosing to start their own businesses in those countries do not face a cost confronting would-be entrepreneurs in the U.S.," Bivens wrote. "Second, small businesses in the U.S. are at a distinct disadvantage in recruiting employees because the cost of providing health care coverage is significantly higher for small companies."

Ultimately, it will be up to policymakers to ensure that transitioning to a Medicare for All system helps as many people avoid long-term job losses.

"The more progressive the taxes that finance health reform, the less they will drag on job growth," Bivens wrote. "Increased public spending combined with progressive tax increases would almost certainly boost the level of aggregate demand and lead to lower unemployment, all else equal."

There would undoubtedly be challenges in implementing Medicare for All, just like there are challenges in upkeep of the current piecemeal system. But the policy would be worth it, the report argues, both in terms of better health outcomes and in economic growth.

"A fundamental health reform like Medicare for All would be an unambiguously good policy for the labor market, for the economy overall, and for U.S. workers," Bivens said in a statement. "Besides the obvious benefits of expanding health care to millions of uninsured and underinsured Americans, Medicare for All could raise wages, boost productivity, and help small business owners."