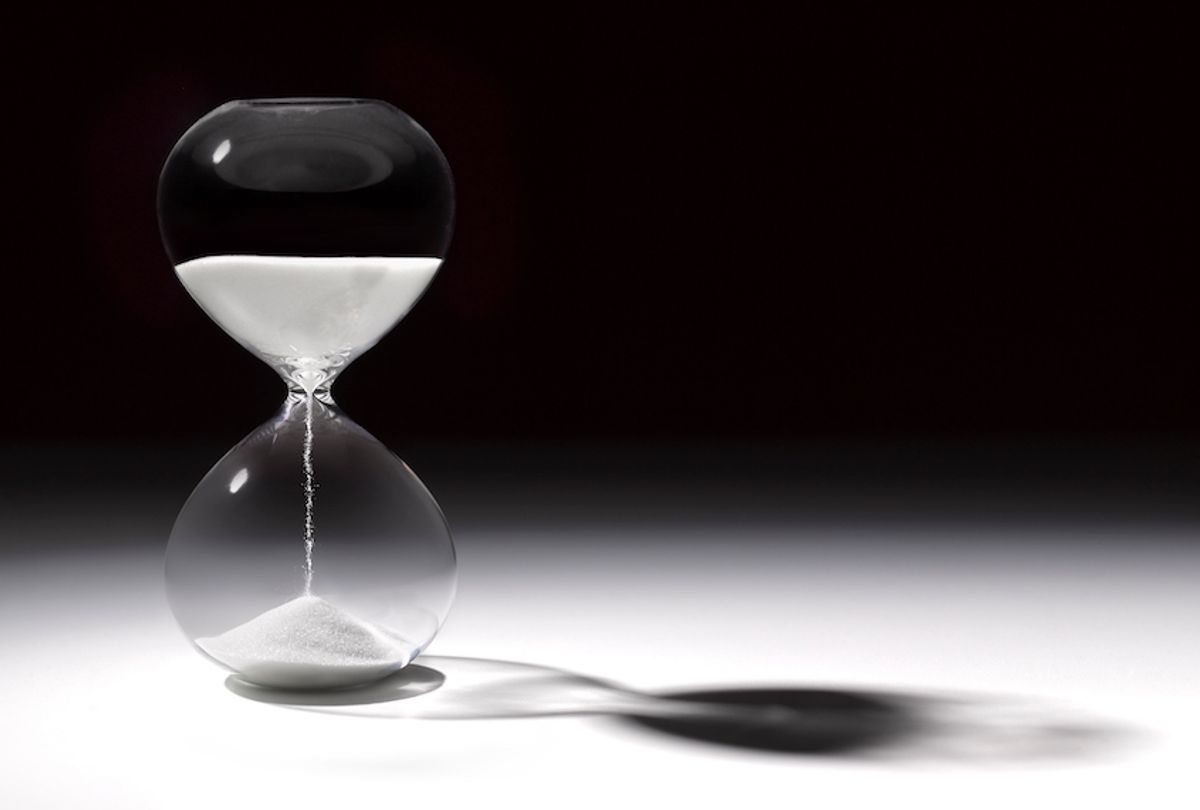 The comedian Mitch Hedberg once joked about a brand of chewing gum that didn't live up to its name: "I had a stick of CareFree gum, but it didn't work," he would say. "I felt pretty good while I was blowing that bubble, but as soon as the gum lost its flavor, I was back to pondering my mortality."

In the end, Hedberg died much too soon, from a drug overdose in 2005, at the age of 37. Recently, Kirk Douglas died at age 103. When someone dies too soon, we say they were cheated; when they live to be centenarians, we think how wonderful to have been blessed with such a long life. But what if Douglas, too, was cheated? What if we could all live to be 150, or 300, or more? Does there need to be any upper limit at all?

This is the age-old question (so to speak) at the heart of Chip Walter's latest book, "Immortality, Inc: Renegade Science, Silicon Valley Billions, and the Quest to Live Forever." Walter, a veteran science journalist, has a straightforward thesis: Death is a problem in need of a solution, and he wonders what would happen if we were to throw enough brains and dollars at it. At least, that's the perspective of the researchers and entrepreneurs who serve as the central characters in Walter's story. To what extent he's on board with their often-extravagant proposals is never quite spelled out, but for the most part he relays their thoughts and aspirations rather uncritically.

Of course, death doesn't live in a vacuum. Rather, it seems to shadow its old friend, aging. And that, for Walter's band of experts, is the key: Wage enough battles against aging, they suggest, and the war against death will be won along the way. As they see it, aging is the stealthy culprit lurking behind many of today's most feared illnesses.

Here Walter cites the work of Aubrey de Grey, a biomedical gerontologist and chief scientist at the SENS Research Foundation. (SENS stands for "Strategies for Engineered Negligible Senescence"; the company, according to its website, is dedicated to finding therapies "that cure and prevent the diseases and disabilities of aging by comprehensively repairing the damage that builds up in our bodies over time.") De Grey, Walter says, was among the first to recognize that our most prolific killers — heart disease, cancer, Alzheimer's — are "aging's side effects."

Aging, Walter writes, is "the mother of all diseases." Rather than tackling diseases one by one, he wonders if more scientists ought to follow in de Grey's footsteps "to get to the root of the problem."

It's not just de Grey, of course. Walter tracks the movements of a half-dozen key players — most of them working in, or at least associated with, Silicon Valley — including genomics pioneer Craig Venter, computer scientist and Google co-founder Larry Page, and futurist Ray Kurzweil. He is especially interested in the money trail: Wherever the money goes, innovation is likely to follow. And the problem of aging has certainly attracted the attention of the tech giants. In 2013, a company called Calico, funded largely by Google, sprang into existence; a story in Time magazine covered it under the headline "Google vs. Death."

So how is the battle against aging going? There have certainly been some striking discoveries. Take stem cells for example. Known since the 1960s, stem cells can develop into many different types of cells within the body, and are now being used in a variety of novel treatments. Placental stem cells may be especially versatile. But there are enormous challenges. As Walter notes: "Introducing new stem cells into the body of someone with a predisposition to various cancers might actually encourage tumors rather than eliminate them."

After citing the work of several optimistic scientists, however, he ends the discussion on an upbeat note, asking if stem cells might become "the holy grail of radical longevity, and thousand-year life spans would abide as the human race broke its evolutionary bonds."

Animals are providing other clues. Consider the naked mole rat. These little pink rodents are similar to mice, but while mice live for about three years, naked mole rats routinely make it to 25. Here we meet a physiologist named Shelley Buffenstein, who oversees the largest captive colony of naked mole rats (some 2,000 of them), tracking them to find the secret to their longevity. One guess: It may involve a protein known as Nrf2, which mitigates the damage to cells caused by oxidation.

Another creature of interest is the bowhead whale, the longest-lived mammal on earth. They can live for more than 200 years; as Walter notes, some of them "might have been swimming the Beaufort Sea when Napoleon was marching on Moscow." Researchers have pondered the whale's environment, its diet, and its genetic makeup. In a sense, all three might be involved: it seems that the whale evolved to live in very cold waters, and to get by on very little food. And, Walter notes, they never seem to develop cancer or dementia.

It's not immediately obvious how humans can capitalize on the bowhead whale's success; but perhaps the cetaceans will at least provide some hints.

Are Walter's experts overestimating the pace of future progress? Some of them are clearly hoping that developments in medical science will parallel those in computer science. Kurzweil spells this out explicitly: The speeding-up that computer scientists label "Moore's Law" is part of a larger trend, he believes; it goes all the way back to the Big Bang, and is indicative of the universe "accelerating its own organization." He calls this the "Law of Accelerating Returns." Kurzweil believes that, by the end of the current century, human technology will have jumped by an amount equivalent to all of the progress made in the last 20,000 years. It was all writ large in everything from the chemical and molecular interactions that shaped the early universe right up to the advent of DNA, genes, language, and mathematics," Walter writes, channeling Kurzweil's vision. "And it was gathering speed with the absolute reliability of a Swiss watch."

A closely related idea is something that de Grey calls "longevity escape velocity": There is no need to solve the aging problem in one fell swoop; rather, the idea is that those who are still in good health at 70 "would live youthfully to 150, at which time more advances would allow them to live to 300 until still more came, and so forth. Somewhere along the line, the really Big Breakthrough would reverse aging altogether."

Does Walter buy into these (and many other) extravagant claims? He doesn't explicitly say so, but his tone is close to that of cheerleader. Given nearly 300 pages in which he could insert a sober note of skepticism, he rarely does so. (In fact, a 2017 New Yorker article, which covered much of the same ground in far fewer words, did a better job of highlighting the difficulty of applying Silicon Valley optimism to health and medicine: The author, Tad Friend, quotes a biologist named Tom Rando: "If you come at biology from a tech point of view, you're going to be disappointed, because the pace is much slower.")

In Walter's account, many obvious questions either go unmentioned or get the briefest of treatments. Is life-extension meant to be an alternative to having children? Or do we envision reaching, say, 300, and having a 275-year-old child and a 250-year-old grandkid — not to mention 325-year-old parents? And who will actually get these imagined treatments and therapies? Will they be available to all, or only the rich — perhaps adding "lifespan disparity" to a host of already problematic disparities? Walter does have a few sentences about this; briefly adopting the voice of a skeptic, he asks if life-extension is for a "bunch of selfish, well-heeled, white, male baby boomers who are looking down the barrel of their own mortality and not caring much for the view?" And, do we even want to live forever? (Some people of course claim that they do — but just wait until they've filed their one millionth income tax return.)

There are some clunky moments, like the opening of Chapter 27: "In early 2016, when she became Calico Labs' chief computing officer, the views and aspirations of Raymond Kurzweil did not inhabit the mind of Daphne Koller." More troubling, however, is the start of Chapter 23, in which Walter's description of a celebrity-packed soiree in Norman Lear's mansion in suburban Los Angeles comes perilously close to duplicating the first few paragraphs of Friend's New Yorker article. (Walter does mention the article a few pages later, but without citing it as a source for his description.)

On the plus side, Walter has clearly gained the trust of some of the most innovative and imaginative thinkers of the early 21st century, and in doing so he's able to offer the reader a glimpse inside their minds. And what we find there is certainly colorful. Whatever one thinks of the quest for immortality, it is impossible not to be intrigued by it, to weigh the allure of a long, possibly endless, life against the realization that our days are almost certainly numbered — and the value that this realization bestows on each and every one of those days.

Dan Falk (@danfalk) is a science journalist based in Toronto. His books include "The Science of Shakespeare" and "In Search of Time."