Why "social distancing," if done wrong, can make you more vulnerable

Research finds that isolation can be bad for your health, and actually put you at greater risk from the pandemic 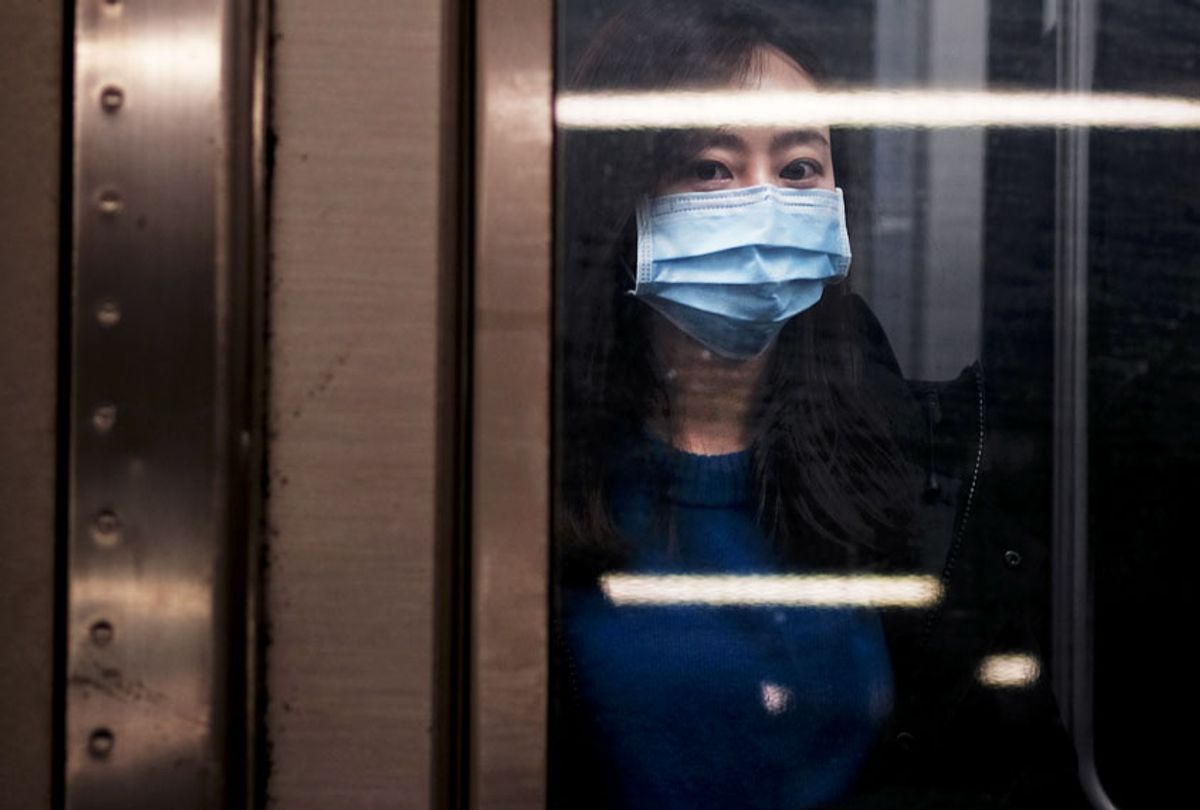 A woman wears a medical mask on the subway as New York City confronts the coronavirus outbreak on March 11, 2020 in New York City. President Donald Trump announced on Wednesday evening that he is restricting passenger travel from 26 European nations to the U.S. in an effort to contain the coronavirus which is rapidly spreading throughout the world and America. (Spencer Platt/Getty Images)
--

Should the cabin lose pressure on an airplane, passengers are told to put our own masks on first before helping those around us. I've always thought that maybe we have to be told this advice because it defies the empathy that makes us human. Amid a crisis, we have a deep desire to help each other that outweighs what we experience in our day-to-day lives. In the wake of 9/11, there was a widely-reported increase in random acts of kindness, like going great lengths to help a stranger find a missing dog. After Hurricane Katrina, some people flew across the country to the middle of a disaster zone to help strangers rebuild their lives. Years later, Katrina survivors flew to Texas to help strangers who had been affected by Hurricane Harvey. Time and time again, we see that a crisis has a way of bringing people together. Disasters tend to turn us into nicer versions of ourselves.

Today, we find ourselves in the middle of an unprecedented global pandemic. The novel coronavirus grinding countries like the United States to a halt; experts fear we are beyond the point of containment. The new government-sanctioned mitigation strategy is to "flatten the curve" — meaning to slow, but not halt, the rate of infection, thus spreading out rather than taxing health care resources. To that end, Americans are being advised to self-isolate and practice social distancing.

As noted, these mitigation strategies are not going to stop the coronavirus from spreading, but will help spread the number of cases over a longer time period which is very important. This will help hospitals from facing the challenges of being overburdened and keeping healthcare workers from reaching a point where they have to choose who lives and who dies, as is happening in Italy currently. In other words, the only way to keep each other safe is to stay away from each other.

But bounding together in the middle of a disaster isn't just an instinct, it is actually good for our health, which I've written about before. And there's compelling evidence to suggest it increases survival rates as well.

This is all to say it might be worth rethinking what "social distancing" means.

Yes, it's critical to follow the Centers for Disease and Control definition, but that doesn't mean we still can't be there for each other in different ways. Daniel P. Aldrich, Professor and Director of the Security and Resilience Studies Program, Northeastern University, began studying resilience in disasters after his home was destroyed by Hurricane Katrina in 2005.

"There is often a focus on individual preparedness in these times, 'Do you have enough water? Do you have a disaster kit?'" Aldrich said, adding we are seeing that right now with people stockpiling toilet paper. "Then the other approach is that the government is going to fix this, that there will be an investments from FEMA, but from my own research and experience, I've found that neither of those individualist responses are as successful as community-based responses, people who know each other, trust each other, and can work together to help one another."

He gave an example of stocking up on canned foods right now, and how it's important to know what your neighbors are stocking up on, too. Considering we don't know what we are facing, if we are at a point where we can't go to grocery stores, rather than being without beans or rice, doing a swap with a neighbor, or having a place in the neighborhood where people can share canned goods — but can still remain a healthy physical distance — could be key to a community maintaining resilience.

Aldrich also gave the example of the 1995 heat wave in Chicago, where over 700 people died in five days. "The people who passed away, it wasn't really a question of age or race or demographics, it was a question of social connectedness," he said. "People who were just vulnerable, like the elderly, they didn't necessarily die because of that, it was when that vulnerability intersected with social isolation."

Aldrich said he fears "if we keep using the word 'social distancing' that is going to cause a problem," suggesting we say "physical distancing" instead.

Certainly, there is a fear of being alone as we distance ourselves from each other, especially in such a stressful state. It's well-studied that the state of loneliness is bad for our immune systems, too. Christine Carter, a sociologist and senior fellow at the Greater Good Science Center at the University of California, Berkeley, explained that being in a "self-survival mode" can amplify stress and worry, too, and that it would be helpful to transition into being in a "species-survival mode."

"The more focused on ourselves we become it snowballs nowhere good — that is where you see hoarding," Carter told Salon. "Someone told me that someone stole the hand sanitizer at the gym . . . . that is the type of self-survival mode that helps no one and we want to break out of that,"  she added. "In a species-survival mode, it's more about 'how will we get through this together?' It fosters a lot of positive emotions, and suddenly you are engaging your empathy, wondering 'who needs my help?' which engages us in compassion, which is one of the most powerful positive emotions."

Carter said this can help reverse the flight or fight response and help return the nervous system back to normal. Carter suggested it might be helpful to reframe what "social distancing" means, especially for those who live alone, to make it feel less alone, too.

"There are people who are literally going to be alone," Carter said. "We need to really think about how we can help them feel connected to a larger whole, and staying in touch with why they are alone, it's not because they have been abandoned, there is no social rejection, what's happening is that they are participating in a larger response for the greater good."

Likewise, there are ways that healthy people, and those less vulnerable to COVID-19, might be called to help physically, too, without putting themselves or the community at risk. Carter said her 17-year-old daughter is quarantined at school right now, and was initially very scared about being isolated. But, with the aid of hazmat suits, the teens have been able to participate in power-cleaning the school, which gives them a sense of empowerment, provides an opportunity for sociability, and makes them feel esteem from being useful. This is how helping others helps us during a crisis.

Both Carter and Aldrich recommended a variety of ways to stay connected during this time. Carter said eating with the people you live with, not in front of screens, will be helpful, along with picking up the phone and calling people who live alone and might feel isolated. If you know someone who is more vulnerable, see if you can run errands for them if they can't go out. Aldrich said playing online games with family, friends and neighbors, is a good way to stay connected, too, in addition to using the internet to organize community supplies.

In "Hope in the Dark: Untold Histories, Wild Possibilities," Rebecca Solnit writes: "Inside the word 'emergency' is 'emerge'; from an emergency new things come forth. The old certainties are crumbling fast, but danger and possibility are sisters." Indeed, we are headed into very uncharted territory. Lives are expected to be lost, and this crisis will feel unbearable for many at times, especially those facing financial or emotional hardship. But just because we need to physically distance ourselves from each other, doesn't mean we can't embrace each other in other ways.