Can a pandemic shake the faith of Trump's followers? Don't count on it

Republican voters still think Trump's done a great job and there's nothing to worry about. When will they break? 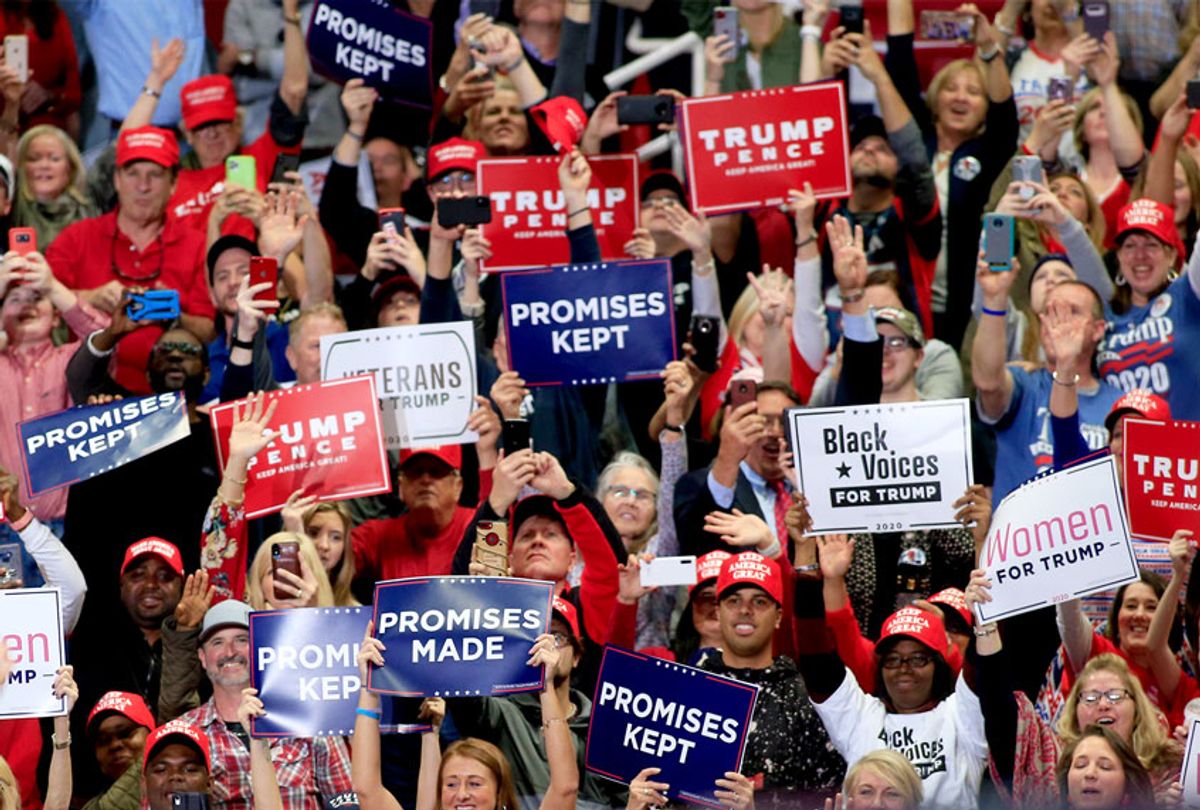 President Donald Trump speaks to supporters during a rally on March 2, 2020 in Charlotte, North Carolina. Trump was campaigning ahead of Super Tuesday. (Brian Blanco/Getty Images)
--

It feels as though the United States entered a new phase in the coronavirus crisis over the weekend. Although President Trump continued to tout his bungling response to the pandemic as a heroic success, the virus just keeps coming. Based on what we hear from all the experts, this is really just the beginning.

Local and state governments, along with the private sector, have stepped up with their own mitigation plans, canceling events and closing schools and nonessential services. Over the past few days, we've seen the closures of restaurants, bars, casinos and other businesses where people gather in groups all over the country.

The CDC announced new guidelines over the weekend directing people not to gather in groups of more than 50.

Trump, on the other hand, still seems to be living in a bubble. He tried unsuccessfully last week to show his executive prowess with an Oval Office address that fell so flat the stock market dropped by 2,500 points. He was so proud that it regained 1,900 points the following day that he sent around autographed copies of the stock ticker to all his sycophants in the media.

He was still bragging about it over the weekend, when he apparently got tested after likely exposure to the coronavirus (his test was reportedly negative) and then announced the next day that he was "very happy" the Federal Reserve had reduced interest rates close to zero.

In his appearances and tweets, Trump made the usual false claims about what a great job he's done and slandered the previous administration over its handling of the H1N1 flu outbreak. During a press briefing on Sunday, he insisted that the virus is "something we have tremendous control of."

Dr. Anthony Fauci, director of the National Institute of Allergy and Infectious Diseases, begged to differ. After Trump left the room, he said, "The worst is yet ahead for us. It is how we respond to that challenge that is going to determine what the ultimate endpoint is going to be. We have a very, very critical point now."

Everything points to the fact that we are heading for a very rough ride for a while, both in terms of public health and economic security. We are not alone. The rest of the world is dealing with this too. But as far as I know, there no other leader of a Western democracy is actively misleading the public with happy talk and lies every day.

David Leonhardt of the New York Times wrote a weekend column looking at all of Trump's comments over the past two months:

[T]hey show a president who put almost no priority on public health. Trump's priorities were different: Making the virus sound like a minor nuisance. Exaggerating his administration's response. Blaming foreigners and, anachronistically, the Obama administration. Claiming incorrectly that the situation was improving. Trying to cheer up stock market investors.

His fatuous comments and outright lies are not taken seriously by well over half the country. But his followers still listen to him, and believe what he says.

On the far fringe there are people such as this former Milwaukee sheriff, once shortlisted for a big job at the Department of Homeland Security:

He is echoing the president himself, who reportedly told GOP donors at Mar-a-Lago:

We've done good. But no matter what we do, it will never be good for the press. Because they're using this to try and win an election. They're trying to scare everybody, from meetings, cancel the meetings, close the schools — you know, destroy the country. And that's OK, as long as we can win the election.

Trump's supporters aren't going anywhere, at least not yet.

The Washington Post reported on the various ways individuals are trying to piece together information about the outbreak. One anecdote featured some Arkansas pastors who were concerned their parishioners were not taking the crisis seriously.

"One pastor said half of his church is ready to lick the floor, to prove there's no actual virus," said King, lead pastor at Second Baptist church in Conway, Ark.

They are getting a lot of this from right-wing media, of course. I wrote about that last week and it isn't improving:

The New York Times checked in with some Trump voters who said, incredibly enough, that they see someone who is listening and responding to experts, coming up with solutions and keeping the nation calm. One woman said, "I appreciate what Donald Trump is doing, saying, 'Yeah, there's a problem, we're taking care of it, but don't panic. It's going to be OK, don't freak out about it.'"

I suspect that most people freak out when hearing him speak on the subject because he clearly has no idea what he's talking about.

According to the latest NBC/Wall Street Journal poll released on Sunday, Trump's job approval stands at 46 percent, exactly the same as it was last month before the crisis really hit. His core fans truly do believe he's doing a heckuva job. And because of that, they see this unfolding crisis differently than the rest of the country:

And 79 percent of Democrats say the worst is yet to come [the same view held by epidemiologists] versus just 40 percent of Republicans who hold the same opinion.

And 26 percent say they've stopped or plan to stop eating out at restaurants, which includes 36 percent of Democrats but only 12 percent of Republicans.

What accounts for these differences? Republicans are being told how to respond by Trump's own henchmen on their favorite "news" channel:

People keep saying that this is Trump's Katrina, referring to President George W. Bush's bungling of one of the worst disasters in U.S. history. But it pays to remember that Bush's approval rating also didn't fall much in the immediate aftermath of that storm. He was right where Trump is at the time, mired in the low 40s. That rating briefly dipped in the two months after the disaster hit and then bounced back up to 43%. It wasn't until the next year that he drifted down into the 30s.

Maybe it took a while to sink in for Republican voters that their hero was failing them, and perhaps the same thing will happen with Trump. If this epidemic hits their own communities — and it will hit everybody's — you'd think the Trump bubble might finally pop. I wouldn't count on it. Their devotion runs deep and I'm not sure anything can break it, not even a disaster of unprecedented scale like this one. He could let their grandmother die of COVID-19 on Fifth Avenue and not lose any votes.