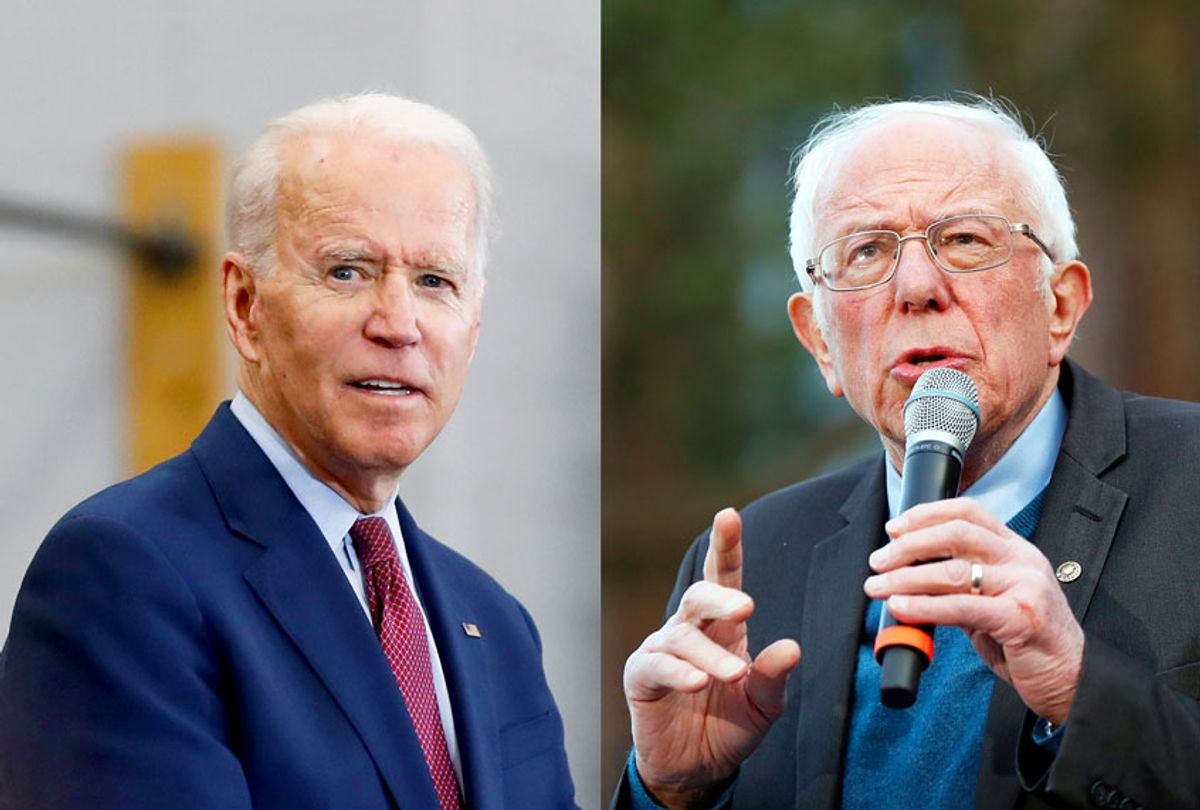 This article will be updated throughout the evening with the latest results from the polls.

Biden was quickly projected to win Florida as soon as final polls closed by the Associated Press. The former vice president led Vermont Sen. Bernie Sanders 62-23 with 99% of the vote counted. Sanders did not win a single county in the state.

Biden was projected to win Illinois by the AP minutes later. He held a 23-point lead in former President Barack Obama's home state with 99% of the vote tabulated.

The frontrunner finished off a truncated sweep when the AP projected him to win Arizona later in the night. Biden leads by 12 points with 88% of precincts reporting.

Still, Biden is expected to win over 100 delegates more than Sanders on Tuesday and has already extended his delegate lead to 1,132 over 817, with some delegates from Tuesday's states yet to be allocated, according to NBC News' count. The network described Biden's growing lead as "nearly insurmountable." Election forecaster FiveThirtyEight now projects that there is a 99% chance Biden will win enough delegates to clinch the nomination before the national convention.

On the Republican side, President Donald Trump was projected by the AP to win the necessary number of delegates necessary to clinch the Republican nomination on Tuesday. Trump has won all but one delegate in New Hampshire, which went to former Massachusetts Gov. Bill Weld.

The effects of coronavirus were evident in Illinois and Florida, where same-day turnout declined although Florida's overall vote total increased thanks to strong early voting. Arizona, on the other hand, saw a surprising increase in same-day voting. Ohio to scrapped their primaries in defiance of a court order Monday night, just hours before voting was set to begin. Ohio Gov. Mike DeWine, a Republican, said in-person voting was incompatible with the guidelines from the Centers for Disease Control and Prevention advising against gatherings of 50 or more people.

The upcoming primaries are in flux as several states have moved to postpone their contests. The Democratic National Committee issued a memo warning states that they could be punished with a loss of delegates for moving their primaries. DNC Chairman Tom Perez has urged states to use mail-in ballots rather than postpone elections.

Biden, who spoke via livestream, reiterated his call for unity and tried to offer an olive branch to Sanders' supporters.

"Senator Sanders and his supporters have brought a remarkable passion and tenacity to the issues . . . Together, they have shifted the fundamental conversation in this country," he said. "So let me say, especially to the young voters who have been inspired by Senator Sanders: I hear you. I know what's at stake. I know what we have to do. Our goal as a campaign and my goal as a candidate for president is to unify this party and then to unify the nation."

"Senator Sanders and I may disagree on tactics," he added, "but we share a common vision."

Biden also called for urgent action in response to the COVID-19 outbreak.

"Tackling this pandemic is a national emergency," he said, "akin to fighting a war."

When Sanders spoke via livestream, he focused on steps to counter the COVID-19 outbreak and largely avoided discussing the day's primaries. The senator called for emergency cash payments of $2,000 for every American every month until the end of the crisis.

Some Biden supporters renewed calls for Sanders to drop out as he headed for a big loss on Tuesday in light of the pandemic.

"I think the conversation is going to quickly turn to how and when does Bernie Sanders unite the Democratic Party," former Sen. Claire McCaskill, D-Mo., said on MSNBC. "I think it's time."

Sanders advisers told Politico that the senator was unlikely to drop out any time soon. Sources close to Sanders told the outlet that Sanders would look to maximize his delegate haul in order to influence the Democratic platform set by the national convention, as he did in 2016, and to further his "political revolution."

McCaskill argued that Sanders has already earned the right to play a role at the convention.

"Bernie's going to have plenty of delegates and power to influence the platform, because we all want to come together," she said. "So I do think the pressure is going to mount especially at this time of crisis in this country."

"This is over," agreed former Obama strategist David Axelrod. "It's over. The election is over tonight. I think that is very clear."

Biden has surged in recent weeks after the other moderates in the race dropped out. He won 10 of 14 states on Super Tuesday and five of the six primaries held last week. But the race has been upended by the COVID-19 pandemic, which forced both candidates to cancel upcoming rallies. Sunday's debate between Biden and Sanders was moved from Phoenix, Ariz. to Washington and held without a live audience out of an abundance of caution.

Ohio, which was scheduled to vote on Tuesday, postponed the primaries until June. Ohio Health Director Dr. Amy Acton ordered polls closed in defiance of a court order to "avoid the imminent threat with a high probability of widespread exposure to COVID-19."

But Florida Gov. Ron DeSantis, a Republican, disagreed with Ohio's move and vowed that the state's primaries would go on as planned.

"We're dealing with it in a thoughtful way, but we're not going to panic," DeSantis told reporters Monday. "The fact of the matter is these things can be done in ways where you're not going to have large crowds, because it's just one vote."

Illinois Gov. J.B. Pritzker, a Democrat, said the primaries would go on despite his order banning gatherings of more than 50 people.

"We have to have our elections continue, in my opinion. This is the right thing to do," he said Monday. "Our democracy needs to go on. If we cancel these elections, when would you have an election?"

Arizona joined the other two states in a statement vowing to hold the primaries as scheduled.

"Americans have participated in elections during challenging times in the past and based on the best information we have from public health officials, we are confident that voters in our states can safely and securely cast their ballots in this election and that otherwise healthy poll workers can and should carry out their patriotic duties on Tuesday," officials from the three states said in a joint statement.

Several other states with upcoming primaries have also delayed their contests until later in the year. President Donald Trump said he believes the postponements to be "unnecessary" Monday.

Biden urged his supporters to come out to vote if they are "not showing symptoms," even though the CDC said people without symptoms can still spread COVID-19 to others. Sanders said it made little sense to hold primaries amid a pandemic at Monday's debate.

"I would hope that governors listen to the public health experts. And what they are saying, as you just indicated: We don't want gatherings of more than 50 people," he said. "I'm thinking about some of the elderly people sitting behind the desks, registering people, doing all that stuff. Does that make a lot of sense? I'm not sure that it does."

Biden has seen strong turnout among older and black voters, particularly in southern states, while Sanders has not seen the youth turnout he hoped would negate Biden's advantage among traditionally reliable voters. Despite the setbacks, those close to Sanders don't foresee an early exit from the race.

"What I know about Sen. Sanders' thought process and focus is it's all about representing the movement and leading what he initially called the political revolution," former longtime Sanders strategist Kurt Ehrenberg told Politico. "And not letting down the people who have been with him all along. I think that's the most important consideration for him."