Right-wing pundits' shameless pivot: It was a "hoax," but now it's an "emergency"

After weeks of minimizing coronavirus, now conservatives are trying to blame Democrats for the pandemic 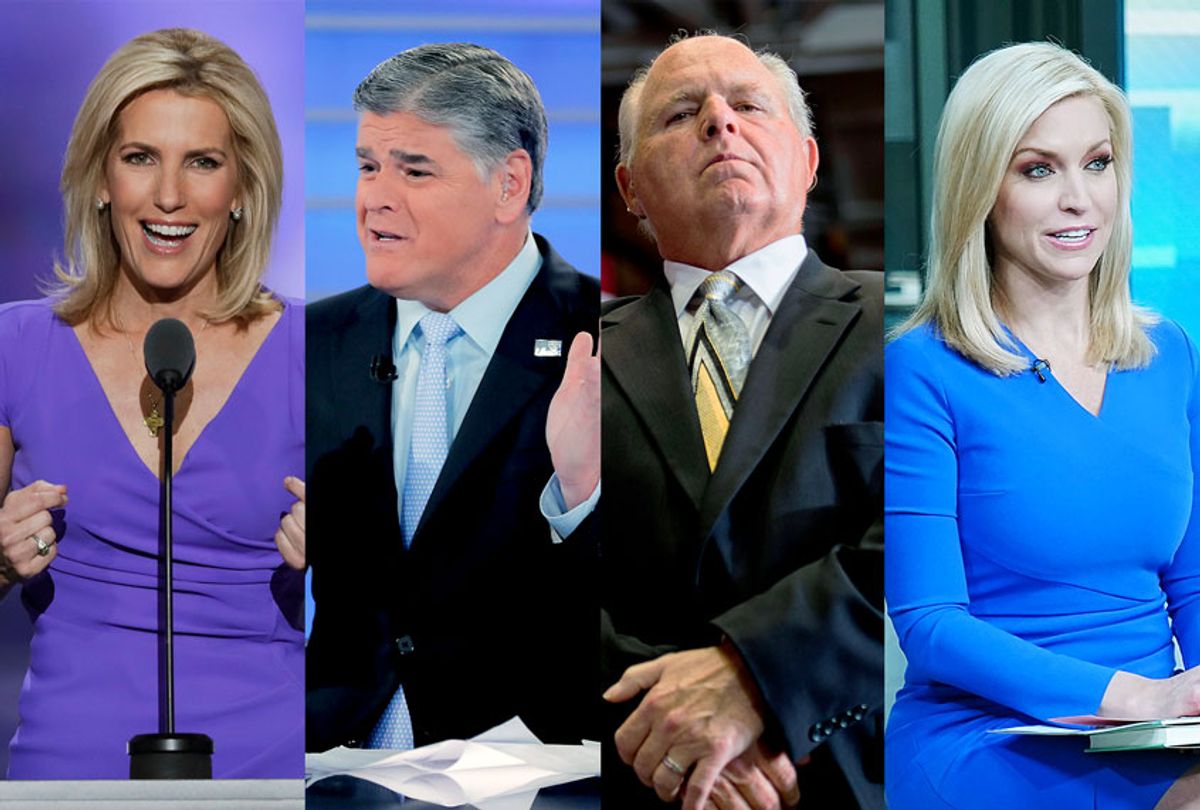 For weeks, Donald Trump clearly believed he could lie the coronavirus away. As David Leonhardt of the New York Times carefully chronicled, starting on Jan. 22, Trump began a campaign of falsehoods geared towards tricking Americans — and especially the stock market — into thinking everything was going to be fine, this epidemic was "very well under control," that "like a miracle" the virus "will disappear" and that anyone who suggested otherwise was participating in a "hoax." Fox News and other right-wing media, in the endless infinity symbol of conservative lies, both led and followed Trump on this, blanketing red-state America with a steady drumbeat of assertions that the "liberal media" was exaggerating the crisis to hurt Trump.

Furthermore, all this happened in the face of substantial evidence that Republican voters and Fox News viewers, who tend to be older and live in rural areas with poorer access to medical care, are more likely to die from coronavirus.

Life, as the Twitter dorks say, comes at you fast. Coronavirus has been reported in 49 states now, and cities are going on lockdown to prevent the spread. After multiple failed stunts geared toward trying to trick investors, Trump finally held a serious press conference on the crisis Monday. All those right-wing pundits on Fox News and talk radio, being utterly shameless, have switched seamlessly from denying that we have a coronavirus problem to claiming that Trump has been showing mighty leadership — and oh yeah, trying to blame Democrats for the problem.

The shift from outright denialism to North Korea-style fawning and deflecting the blame was, of course, entirely predictable. The entire right-wing noise machine, now shaped completely around the bottomless ego-flattering needs of a failed businessman who demagogued his way into the White House, has always disdained facts in favor of keeping up a relentless drumbeat of tribalist messaging to convince their audiences that they are always in the right, no matter what. Any disagreement from liberals, in this worldview, reflects their secret anti-American agenda.

Still, it never stops being remarkable how shameless conservative punditry can be about insisting they were always at war with Eastasia and that we're crazy to suggest that, just yesterday, they told us we were at war with Eurasia.

For instance, for weeks — and as recently as last week — Fox News host Sean Hannity continued to use the word "hoax" to describe the coronavirus crisis and suggested that public health experts were "scaring people unnecessarily." Now Hannity is singing a different tune, admitting that we "need to prepare for the worst-case scenario."

Where Hannity is unwavering, of course, is in his need to fluff Donald Trump. Last week, the party line held that Trump was the victim of liberal hoaxers. This week, the lie is that a "bold, new precedent is being set" by this president and that "the world will once again benefit greatly from America's leadership." There was no acknowledgement that Trump spent weeks wasting time and discouraging efforts to prevent the viral spread, all of which no doubt made the situation far worse than it had to be.

And, of course, Hannity is now looking to blame Democrats instead of Trump's incompetence:

In case you're scoring at home, Fox has now moved on from "Democrats are inflating this crisis solely to get President Trump," and has settled on "it's only this big a crisis because Democrats let it get that way."

Seems right—besides the absence of facts or logical consistency. pic.twitter.com/epz7lR8iYt

Last week, Fox News host Laura Ingraham was praising Trump for supposedly fighting back against the "panic pushers" and hosted a guest who encouraged viewers to ignore the CDC because it's "a highly politicized organization" — because, if you can believe it, the CDC believes that guns kill people. (Guns kill about 100 Americans a day.)

Like Hannity, however, Ingraham has shifted from minimizing the epidemic to blaming liberals, declaring that "the media," that eternal right-wing bogeyman, has "been enjoying this moment that has brought great inconvenience, disruption and suffering to American workers and families" because "some people think it's Trump's downfall."

(In reality, most journalists — who aren't overpaid liars like Ingraham — are terrified that this economic disruption will do further harm to our already unstable industry.)

The Fox News switch, at times, gets downright comical — or would be, if their irresponsibility hadn't contributed to this crisis.

On Friday, Ainsley Earhardt told viewers that the coronavirus pandemic is "the safest time to fly." On Monday, she's been replaced by a doctor telling people that social distancing is for "the greater good." pic.twitter.com/DzBoqDacKg

Rush Limbaugh was perhaps the loudest voice in the right-wing ecosystem to stick by the it's-a-hoax strategy, and continued on Friday to lambast anyone who took coronavirus seriously, insisting that the Chinese were running "a scam" and were "laughing themselves silly over how easy this has been," and claiming COVID-19 is nothing more than a cold virus.

Limbaugh isn't broadcasting today. His guest host, Mark Steyn, issues a wake-up call to the audience on the dangers of coronavirus: "If you don't believe me on this, Trump's surgeon general said we're 2 weeks behind Italy."

In the face of all this seesawing about whether to believe coronavirus is a Democratic/Chinese hoax or to believe it's a real disease that Dear Leader is mastering despite Democratic opposition, Trump's America appears ... confused.

As the Washington Post chronicled, conservative pastors are reporting that many congregants haven't made the leap from believing it's a hoax to blaming Democrats, with one pastor saying that "half of his church is ready to lick the floor, to prove there's no actual virus."

Politico chronicled how the second-tier right-wing nuts — the Breitbart types, the former Trump workers, the Twitter trolls that feed the Trump media ecosystem but aren't quite as famous as the Fox News pundits — are still vacillating between claiming the coronavirus epidemic is a hoax (and comparing it to climate change, another real and grave danger conservatives claim not to believe in) or taking it seriously and trying to exploit it for political gain.

The New York Times, in one of its numerous safaris to gawk at exotic Trump voters in the heartland, records that while folks out in red-state America can't decide if the virus is a real threat or not, they are absolutely determined to believe that, whatever happens, their beloved orange goblin of a president is handling things perfectly.

"[H]is No. 1 goal is to keep us safe," one supporter declared, from deep in her delusions.

Nothing, of course, could be further from the truth. Trump's No. 1 goal has always been ensuring his own re-election at any cost, so he can continue to profit off the presidency and, of course, avoid legal liability for his many crimes. That's why he lied about the coronavirus relentlessly. The only reason he's shifting gears now is that those lies didn't work, so his only hope of saving his own skin is to try to look tough and decisive (while relying heavily on state and local governments to pick up the slack and save him from himself).

Here's what's amazing about this: It was evident to those of us in reality-based America from the get-go that this was a rare situation where Trump's interests and the public interests were pretty much aligned. If Trump and his propagandists had taken this epidemic seriously in the first place, and pursued real measures to address the public health crisis and convince Trump's tribal followers to take the whole thing seriously, the virus wouldn't have been so disruptive — and also wouldn't have become such a threat to Trump's re-election.

At every turn, however, Trump and his camp followers were driven by an instinctual sense that what is good for the country is bad for Trump — as well as a deep contempt for expertise, especially scientific expertise. So they rejected the repeated advice to do something that might have prevented or at least mitigated this catastrophe.

If you haven't noticed this, Trump's state media is completely, utterly, unbelievably shameless.

Hannity then VS Hannity now

They made this worse and we can't let them get away with it pic.twitter.com/lvPWsAvell

Now it may be too little, too late.