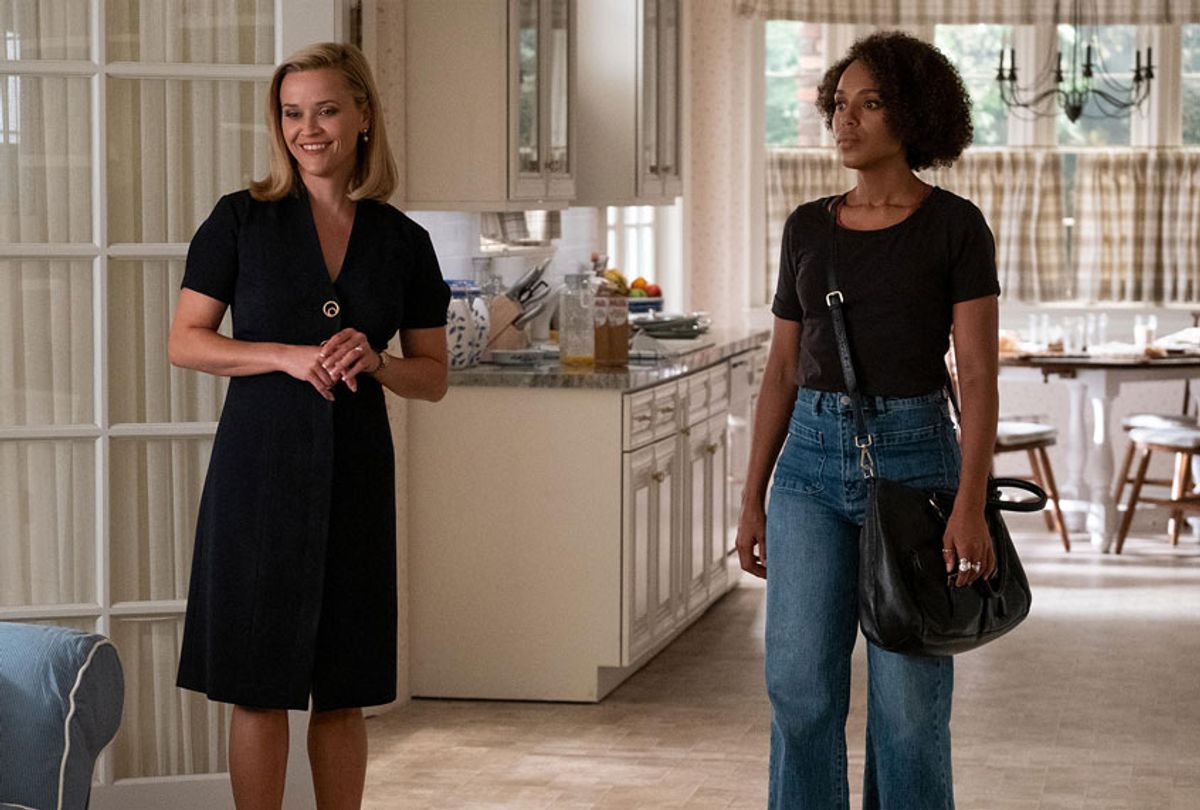 Hulu premiered "Little Fires Everywhere" a day early, a gracious gesture in the midst an escalating storm. The highly anticipated series adaptation of Celeste Ng's 2017 bestseller was supposed to debut on Wednesday, so there's little harm in releasing the first three episodes into the stream a few hours ahead of schedule.

And we're guessing hunkered-down viewers looking forward to watching Reese Witherspoon and Kerry Washington squaring off were pleased by what they saw. Certainly I was: In three lithe hours the series takes you back to the strange false brand of crunchy consciousness that went mainstream in the 1990s in ways that feel familiar while bringing forth the terrifying and repulsive.

I'm quoting a character featured later in the eight-episode season, by the way – an art teacher played by Anika Noni Rose who is explaining to her students what bold, unique art should be. Great work, in her view, captures the essential meaning of the term "uncanny." And this is what this drama achieves in its best moments by creating a story that's recognizably American and as affectionate and forgiving in examining that image as it is indicting. It's addictive and highly enjoyable, and a tad triggering – but, you know, in a healthy and cleansing kind of way.

"Little Fires Everywhere" is the type of celebrity book club-inspired drama – we're talking about Witherspoon's book club, in this case –  built to be a thirst trap for "Big Little Lies" addicts. The plots themselves are quite different; nevertheless, the TV version of Ng's story was destined to draw comparisons to HBO's primetime soap for reasons beyond the obvious.

Witherspoon stars in both series, and each digs into issues of class privilege, snobbery ,and motherhood. Folding race into the script changes the catalyzing essence of "Little Fires Everywhere," however, escalating the tension in subtle ways without abandoning any fealty to the original plot. Washington co-executive produces the series along with Witherspoon, and plays Mia Warren, a character whose racial identity is never specifically announced in Ng's novel.

In the series, Mia is a black single mother who settles into Shaker Heights, Ohio, an affluent and very white suburb of Cleveland, ostensibly to avail her daughter of the town's superior public schools. And none of her neighbors mistreat her or her daughter Pearl (Lexi Underwood) in outwardly obvious ways. Indeed, Witherspoon's Elena Richardson welcomes them with open arms almost immediately – renting her former home to Mia at under market value, sending her second-oldest teenage son Moody (Gavin Lewis) over to help them get settled.

Elena takes pride in being the kind of upstanding woman who does the right thing, bestowing many kindnesses upon Mia and Pearl despite Mia's initial and visible chill at offers Elena considers to be generous. Like, say, asking her if she'd like to earn money by being her family's housekeeper – er, "home manager."

In this way "Little Fires Everywhere" establishes its worth beyond simple distraction. At this point it goes without saying that both its leads are terrific, even though Witherspoon's Elena has a nearly identical behavioral profile to her "Big Little Lies" character Madeline Mackenzie. Maybe that's not entirely true; Elena is a brittle woman wound tightly enough to snap her own spine.  But both women are obsessed with cultivating a flawless image and wielding their influence to shape their tidy corner of the universe as they see fit.

Each also personifies the brand of white feminist liberalism that makes anybody they unconsciously view as lesser beings want to rip their hair out while shattering glass with their screams. We just didn't notice that irritating trait in Madeline as much because the only major character of color in "Big Little Lies" was simultaneously presented as thoroughly exoticized and assimilated.

"Little Fires Everywhere" places Mia's and Pearl's blackness right up front, marking the starkest contrast between the two series while also proving how conscientiously showrunner Liz Tigelaar and the drama's writers fold it into the narrative. Every favor Elena bestows upon Mia, a black woman who dresses herself and her child in hand-me-downs and sources everything she owns from the Goodwill, emerges from a place of assumption.

While it is obvious that Mia has secrets and is fiercely protective of Pearl, when Mia tells Elena that she's an artist Elena looks at her bohemian wardrobe and initially translates that to mean down and out and homeless, a charity case she can feel good about fixing.

When Mia and Pearl meet Elena's husband Bill (Joshua Jackson), eldest son Trip (Jordan Elsass), daughter Lexie (Jade Pettyjohn) and her youngest Izzy (Megan Stott), both she and Lexie are quick to let them know that their family is perfectly fine with black people by finding occasion to announce that her forebears integrated Shaker Heights, and Lexie's boyfriend is black.

They equate being open-minded and liberal with inviting the poor black fatherless family into their rich whiteness and expecting Mia and Pearl to play along as they appropriate their pain. They do, to a point, far enough to survive and get a foothold before it all goes wrong. A defining signature of Washington's is the blinking wince in her expression in moments of distress – she wears that quite a bit throughout this series, but usually when Mia knows Elena isn't looking.

"Big Little Lies" may be the easy and direct comparison here, but once "Little Fires Everywhere" accelerates into the story it bears more than a passing resemblance to Jordan Peele's "Get Out" – minus the forced brain transplants and with the addition of more white wine and a slightly more frivolous, over-the-top celebratory gathering.

Where Peele disguised his social and racial commentary consciousness in a horror costume, "Little Fires Everywhere" veils its provocations in the sort of broad, WASP-y fantasy people so fondly devour.

A subplot involving Mia's co-worker Bebe (Huang Lu) and her struggle to find the child she abandoned places that angle on the backburner for Washington's character, and that only makes Underwood's portrayal of Pearl's internalized struggle to fit in shine brighter.

Out of the younger members of the cast she and Scott have the heaviest lift with their storylines, as Ng highlights in her book. Pearl's and Izzy's separate battles to find a place in a world that doesn't understand them and to reconcile themselves with their respective mothers' feelings for them, grant the actors opportunity to gut us in quiet moments over and over again.

And through their stories, the series deftly engages the viewer with thorny, unpleasant social concerns, inviting us to comfortably sit in zones of discomfort for hours at time.

Funny that in this new era of social distancing, "Little Fires Everywhere" has found a way to potentially bring people together in conversation about the chronic disease Americans consciously avoided talking about for decades upon decades. Oh, it won't cure anything. Please. But in this sudden onset of fear about an ailment that stands a chance of killing a lot of us very quickly, it's fascinating to contemplate the relative entertainment value in devouring a new spin on a story that is uncanny, familiar and highly relatable.

The first three episodes of "Little Fires Everywhere" are currently streaming on Hulu. New episodes will debut each Wednesday.