"You have to be a legitimate person," Paul said. "It has nothing to do with not liking immigrants" 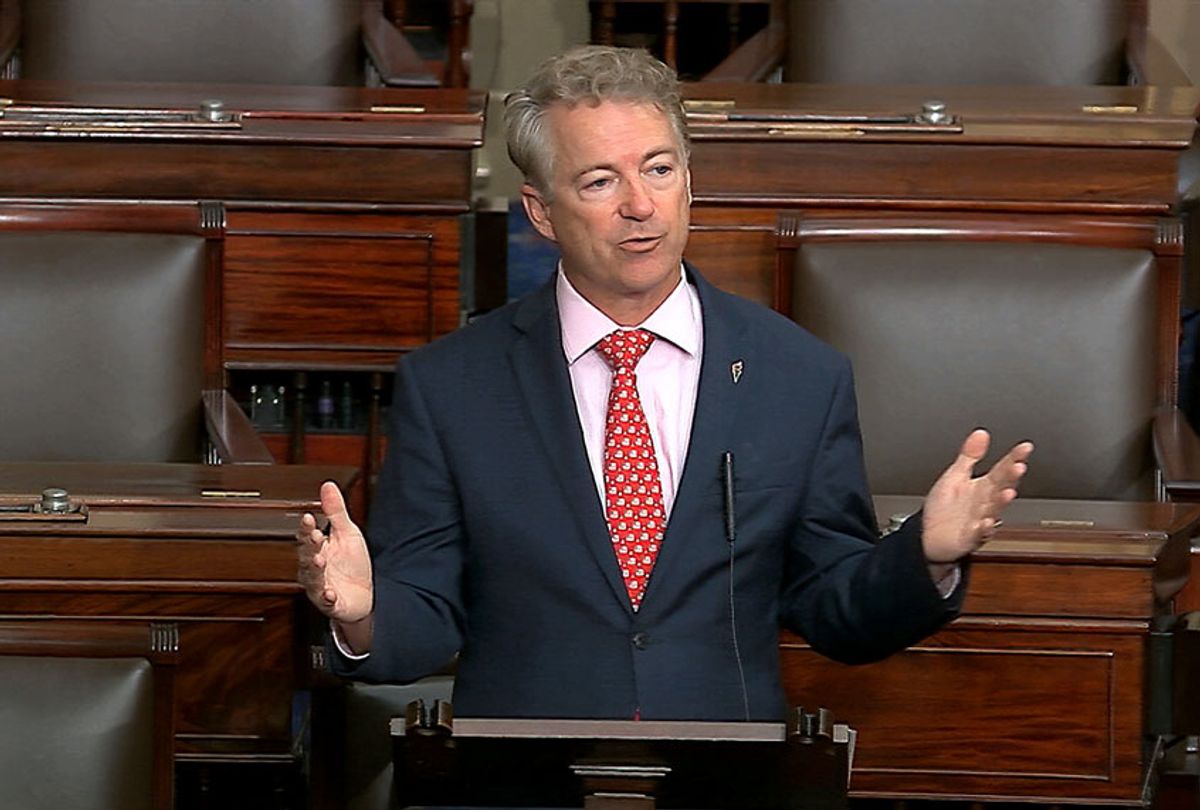 In this image from video, Sen. Rand Paul, R-Ky., speaks on the Senate floor at the U.S. Capitol in Washington, Wednesday, March 18, 2020. (Senate Television via AP)
--

Paul, who held up a stimulus bill negotiated by the White House and House Democrats, called for an amendment intended to pay for some of the costs of the aid by blocking people without a Social Security number from accessing federal child tax credits. He argued the move would save $26 billion.

"If you want to apply for money from the government through the child tax credit program, then you have to be a legitimate person," Paul said. "It has nothing to do with not liking immigrants. It has to do with saying, taxpayer money shouldn't go to non-people."

"This has nothing to do with undocumented immigrants," the statement said, even though Paul's very next sentence referred to immigrants.

"A number of my members think there are considerable shortcomings in the House bill," McConnell said Wednesday. "My counsel to them is to gag and vote for it anyway."

The Senate ultimately rejected Paul's amendment in a 95-3 vote.

"In a time of national emergency, this Republican amendment is ridiculous," Senate Minority Leader Chuck Schumer, D-N.Y., said. "A colossal waste of time."

"The men and women who pour their entire lives into small businesses do not need even more new obstacles," McConnell said in his floor speech. "They need help. They need a lifeline. They need to know that Congress understands the historic obstacles they are facing and that we have their back, too."

The vote comes as the Trump administration pushes Congress to pass a $1 trillion stimulus package that could include direct payments to Americans.

Some Republicans, like Sen. Lindsey Graham, R-S.C., called the proposal a waste of money.

"It won't help the economy just throwing money at a problem," he said. "I don't know why giving a thousand dollars on top of their paycheck makes any sense now because there's no economy to participate in. I'd rather take that money and shore up health care systems . . . I don't think people are looking for a one-time check from the government."

But Treasury Secretary Steven Mnuchin warned Senate Republicans on Tuesday that the unemployment rate could hit 20% as a result of the coronavirus crisis.