"These statements are dangerous and erroneously assign blame" 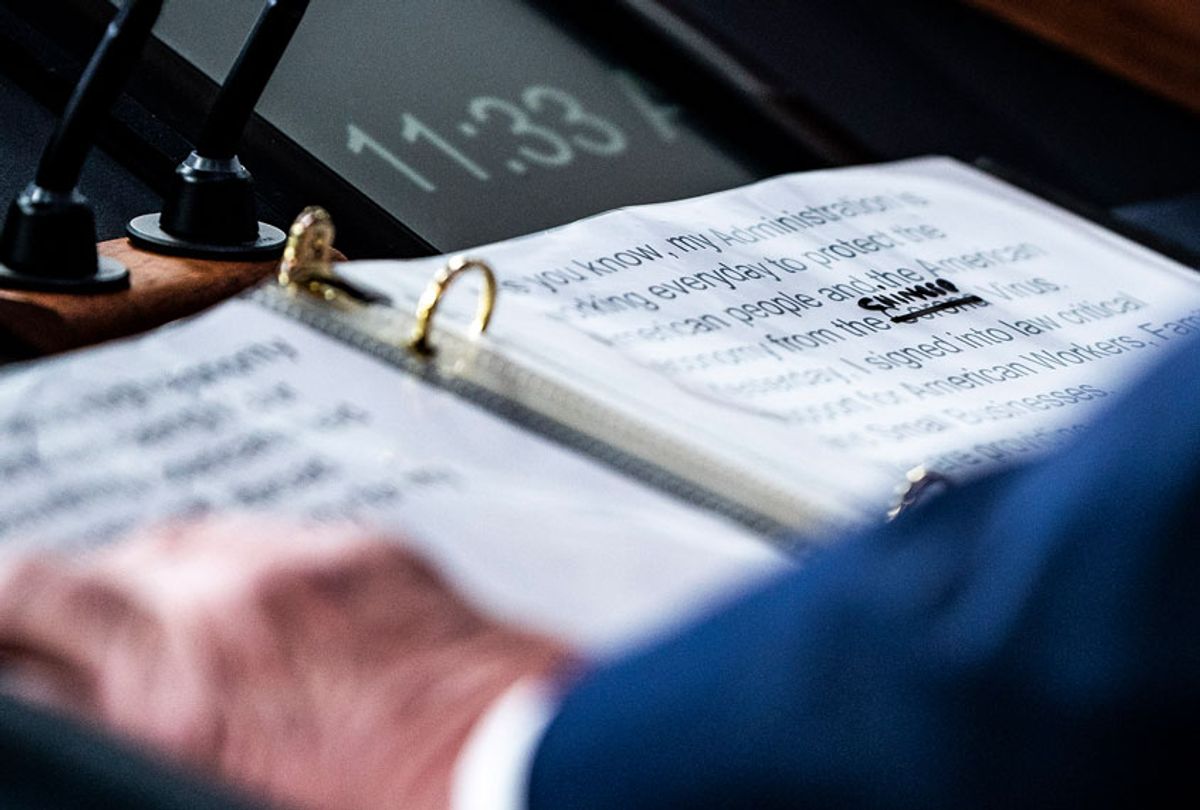 A close up of President Donald J. Trump's notes shows where Corona was crossed out "Corona" and replaced with "Chinese" Virus (Jabin Botsford/The Washington Post via Getty Images)
--

A photographer revealed Thursday that President Donald Trump crossed out "coronavirus" in notes used during a press conference and replaced it with the racist phrase "Chinese virus" using his signature black Sharpie.

"Close up of President @realDonaldTrump notes is seen where he crossed out 'Corona' and replaced it with'"Chinese' Virus as he speaks with his coronavirus task force today at the White House. #trump #trumpnotes," Washington Post photographer Jabin Botsford tweeted Thursday.

"The comments made by President Trump intensifies the xenophobia and racism that's become rampant against Asians and Asian Americans globally," Rosiland Chou, a sociology professor at Georgia State University, told Salon on Tuesday after the president publicly used the phrase "Chinese virus" on several occasions. "He's fueling fears against Chinese, specifically. However, people of Asian ancestry across the globe may face collateral damage. These statements are dangerous and erroneously assign blame to people who are as susceptible to the disease as anyone else worldwide."

Mike Ryan, the executive director of the World Health Organization's Emergencies Program, told reporters at a press conference Wednesday that Trump's use of the term "Chinese virus" ignored the fact that "viruses know no borders and they don't care about your ethnicity, the color of your skin or how much money you have in the bank."

Ryan added that a 2009 influenza pandemic that originated in North America was not called "the North American flu."

"We need now is to identify the things we need to do to move forward quickly, with speed and to avoid any indication of ethnic or other associations with this virus," he said.

The Digital Forensic Research Lab of the Atlantic Council, a think tank that specializes in international affairs, released a report Tuesday (first shared with Axios) revealing that the terms "Chinese virus" and "Wuhan virus" — the latter of which was prominently used on Twitter last week by Republican Rep. Paul Gosar of Arizona on Twitter — are increasingly popular among conservatives in spite of their racist subtext.

The phrase "Wuhan virus" began to trend on Twitter after Secretary of State Mike Pompeo first used it, with alt-right political commentator Jack Posobiec ridiculing liberal outrage over the epithet by changing his Twitter profile to read "Wuhan Jack." Conservatives also began referring to the disease as the "Chinese coronavirus" after Pompeo dropped the term during major media appearances and House Minority Leader Kevin McCarthy, R-Calif., used it in a controversial tweet.

"Retweets of the terms 'Wuhan Virus,' 'Wuhan Coronavirus,' 'China Virus' and 'Chinese Coronavirus' were relatively non-existent prior to Rep. Paul Gosar's March 8 tweet," the Atlantic Council wrote. "Within an hour of the congressman's tweet at 9:08 p.m., the phrases had been retweeted 24,049 times."

The World Health Organization, which launched a campaign last month to discourage terms that link the COVID-19 pandemic to a specific group of people, is also facing controversy over its response to the outbreak. The organization tweeted the Chinese government's claim that there had been no human-to-human transmission of the virus in January, even though it has since been confirmed that state officials were aware of the outbreak by that time.