Netflix's lush "Self Made" deftly glams up an underexposed history 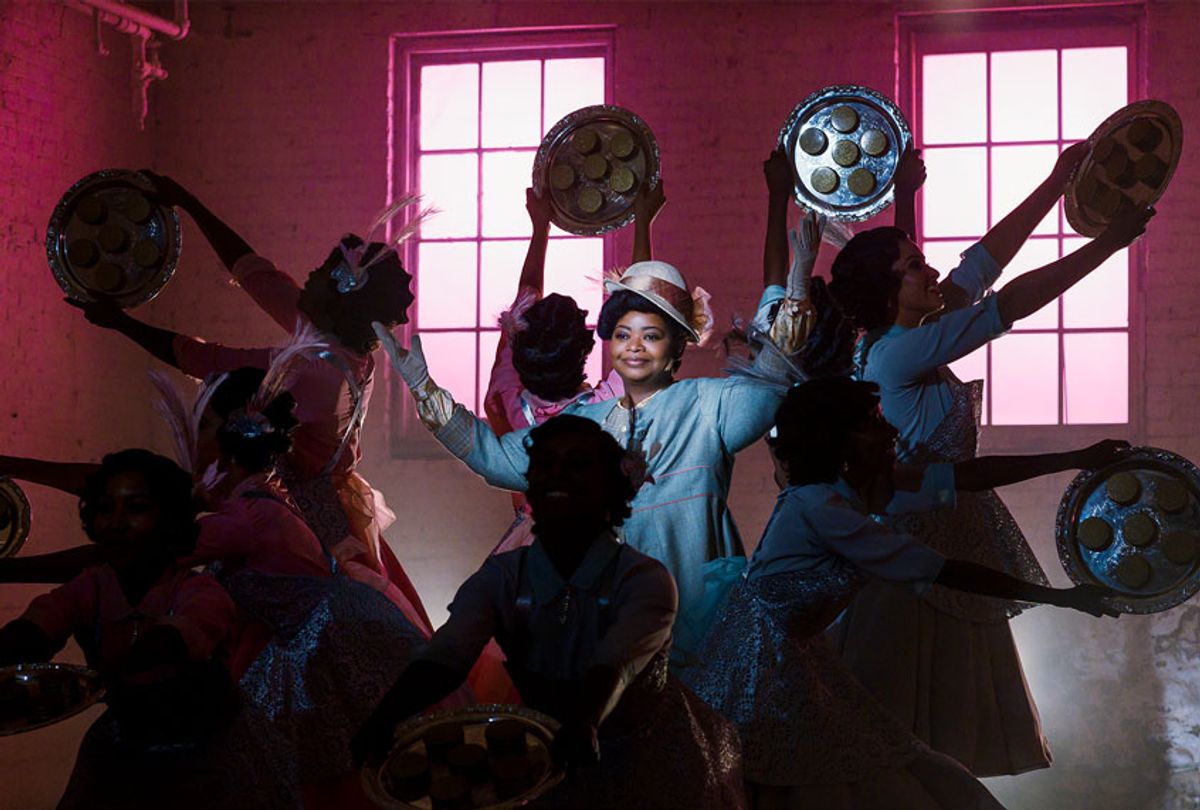 Octavia Spencer in "Self Made" (Amanda Matlovich/Netflix)
--

Before miniseries attained a prestige aura by being rebranded as limited series, TV audience embraced them as lush, big-budget delights that only came around a few times a year. Legendary among them were the ones adapted from bestseller potboilers built around a torrid affair or a romanticized setting. "The Thorn Birds," "Lonesome Dove," "Lace," TV versions of James Clavell's problematic Orientalist fantasies – these were the sweeps months staples of the 1970s and '80s.

The most successful miniseries of this era, of course, was "Roots," adapted from Alex Haley's novel based on his family's history, tracing the journey of a slave named Kunta Kinte from the African continent to the United States and the stories of his children.

And with a few exceptions – "Roots" and "Lonesome Dove" among them – most people have forgotten that these multi-night one-time ratings magnets exist. Good luck finding any of them on streaming services without paying for a subscription add-on. Hulu has History's recent remake of "Roots" available to stream, not the original.

The 1977 version of "Roots" cannot be obliterated from memory because it still holds the record as the third-highest-rated episode for any type of television series, and the second-most watched overall series finale in the U.S., ever.

"Lonesome Dove" is also easy to recall thanks to the occasional appreciative retrospective piece now and again. Yes, it has a romantic heart, but it's also a Western, making it OK to celebrate among critics, the bulk of whom are still white and male. It also helps that "Lonesome Dove" stars respectable actors like Tommy Lee Jones, Robert Duvall, Diane Lane, Chris Cooper, Anjelica Huston, Danny Glover and Ricky Schroeder, the "Silver Spoons" child star we all took more seriously after he joined the cast of "NYPD Blue."

"Roots," featuring icons such as Ben Vereen, LeVar Burton, Louis Gossett Jr., Leslie Uggams, and John Amos, is a superior work fueled by stories of struggle, triumph over despair and misery, owing to its subject matter.

I'm telling you all of this to explain why the four-part Netflix series "Self-Made: Inspired By the Life of Madam C.J. Walker" is an anachronistic act of wish fulfillment meant for the slice of the viewership that has only recently gotten to see its history depicted with spice and luxury in a short-run series like this – or, truly, any kind of series.

That last bit illustrates her bitter rivalry with fellow hair care entrepreneur Addie Monroe, vamped up to maximum decibels by Carmen Ejogo. It is decidedly an old-school, good-time miniseries dropped into a world that will measure it by upper-crusty limited series standards.

It also confidently strides through such nagging issues as colorism, class discrimination, and sexism black people visited upon each other in post-slavery, pre-Gilded Age America, all while it caresses, thoughtfully, the complex social and personal issues wrapped up in the relationship between black dignity and our hair, and the impossible, ugly beauty standards erected as an obstacle to opportunity.

Naturally, I expect a lot of people won't be amused by such a high-concept treatment of this inspiring true story. The broader American public is unfamiliar with Madam C.J. Walker's legacy as a beauty industry pioneer. Most high school history curricula skip over her contributions to black entrepreneurial history and her support of the Harlem Renaissance in their slapdash black history month lesson plans. To the generation that knows who she is, however, her name is synonymous with entrepreneurial drive, innovation and the timeless dynamism summed up as hustle.

She also purposefully worked against the deep-rooted, detrimental notions of beauty and femininity that pitted black women against one another in the social order based on the color of her skin and the texture of their hair. Her fortune grew from promoting beauty's attainability to all black women instead of limiting it to those who fit a Eurocentric model of attractiveness.

Black women wrestle with these internalized issues even now, a struggle reflected in popular culture. Soap operas and romantic dramas led by black cast are still a novelty on TV all these years after the miniseries heyday. Realize that despite the overwhelming, record-shattering audience for "Roots," few multi-night special products featuring majority black casts aired on broadcast TV in its wake (1989's Oprah Winfrey-produced "The Women of Brewster Place" comes to mind, but not much else). I cannot recall many, if any, TV miniseries that African American audiences could view as their "Thorn Birds."

That is not to say "Self-Made" is expressly that sort of frothy entertainment. It does have weight, thanks to Spencer's gripping performance and Blair Underwood contributions as Sarah's husband C.J., who at first simmers with adoration for her before seething about coming in second to her business ambitions.

But it also proves the value in packaging an underexposed history in the type of sparkle and melodramatic glam long reserved for other figures who aren't dark-skinned black women. Kasi Lemmons, who direct two of the four episodes, adds the right amount of flair to establish its tone in the same way that she refurbished Harriet Tubman into a fiery superhero.

And there are enough useful crumbs of history to straight out a few popular rewritings, such as Roger Guenveur Smith's more honest depiction of Booker T. Washington as a figure placatory of white supremacy. "Self-Made" also brings in W.E.B. Du Bois (Cornelius Smith, Jr.) and inserts moments that demonstrates how Sarah's independent study in business education led to her success, mirroring the origin stories of a number of black business magnates of our time.

Bouncing a modern hip-hop soundtrack story behind a story set in the early 1900s feels right, as does the dialogue's modern leanings. Even the fact Tiffany Haddish, who plays Sarah's daughter Lelia (based on her daughter A'Lelia), doesn't make much effort to play beyond her usual stage persona is excusable. Haddish may be the weakest link in the main cast, but Spencer exudes enough iron determination, irrepressible drive and pain to overrule that weakness.

Even Ejogo's "Dynasty"-level villainy somehow works, although a person has to wonder what the descendants of Annie Turnbo Malone, the real woman upon whom Addie Malone is based, have to say about how their forebear is depicted. (The miniseries is based on a biography written by Walker's great-great-granddaughter A'Lelia Bundles.)

Malone outlived Madam C.J. Walker and became a multi-millionaire and a philanthropist in her own right, opening a beauty college with the fortune she built from developing the hair care formula upon which Madam C.J. Walker.

One day I'm certain someone will undertake an awards season-worthy treatment of these women's biographies. Each merits that level of creative consideration, and heaven knows it's long overdue. But "Self-Made" is fine and praiseworthy for right now, when people are hungry for feel-good content that exposes them to a new story and doesn't tax the soul. That's something today's limited series can learn from the old-school minis we once flocked around, that sometimes we need stories that wrap their substance in baubles that seduce the heart and please the eye. "Self-Made" liberally applies that concept like a cosmetic, in a way of which I'd wager the good Madam herself might approve.

"Self-Made: Inspired by the Life of Madam C.J. Walker" is currently streaming on Netflix.