With the safety of abortion at stake, the Supreme Court could rule against science 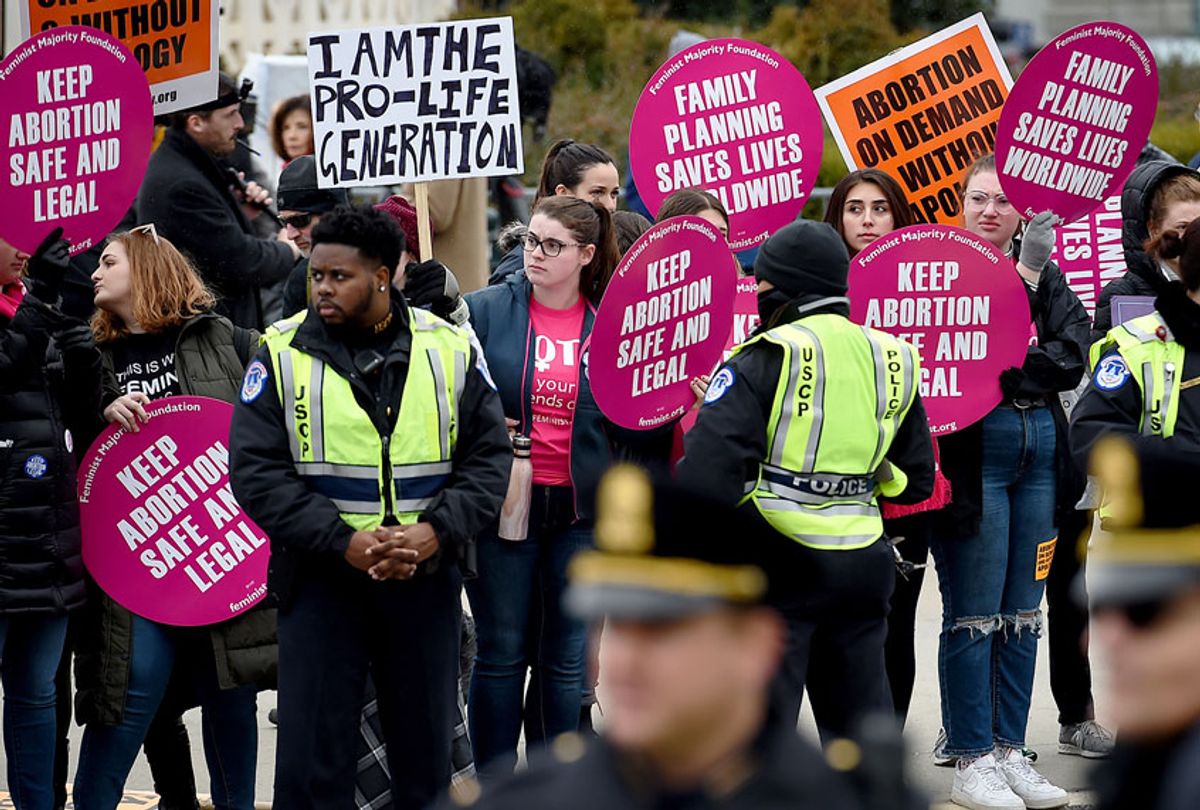 Pro-choice and pro-life activists demonstrate in front of the the US Supreme Court during the 47th annual March for Life on January 24, 2020 in Washington, DC. (OLIVIER DOULIERY/AFP via Getty Images)
--

In 2016, the U.S. Supreme Court ruled that it was unconstitutional for Texas to require abortion providers to have admitting privileges at a local hospital. Last week, the Court heard oral arguments in a case challenging the same requirement in Louisiana. The state in question may have changed, but the fact remains: These kinds of laws unfairly target abortion providers without improving public health.

But this case goes far beyond a single abortion restriction. If the Supreme Court upholds this law, it will give state lawmakers a green light to ignore science whenever they want for the sake of ideology.

Admitting privilege laws are among the slate of restrictions commonly known as TRAP laws, or targeted regulation of abortion providers. TRAP laws, which are in place to varying degrees in dozens of states, also include requirements that clinics conform to the physical standards of ambulatory surgical centers (ASCs). This can include installing more advanced and expensive equipment, requiring separate recovery rooms, or more advanced staffing than a typical clinic or medical office. These laws are often passed under the guise of protecting patient safety. After all, the reasoning goes, don't more regulations mean better care?

As a doctor of public health, I care about the safety of patients seeking medical services, including abortion care. But research, including studies led by myself and my colleagues at Advancing New Standards in Reproductive Health, shows that TRAP laws do not make patients safer and are therefore unnecessary. The false arguments being made in support of such laws demonstrate the spread of anti-science sentiment among regulators, lawmakers, and the general public.

These kinds of laws do, however, make a difference when it comes to patients' ability to access care. It can cost clinics hundreds of thousands of dollars to convert their facilities to match ASC standards, and physicians in conservative-leaning areas often struggle to obtain hospital admitting privileges for political reasons. After Texas implemented HB 2, which included both admitting privilege and ASC requirements, the number of clinics in the state plummeted—making abortion more difficult, and sometimes impossible, for people to get.

The safety of abortion and the consequences of making it more difficult to access means TRAP laws are similar to treating someone with steroids when they're not even sick: an aggressive preventive measure that could, in itself, have harmful consequences.

To be clear, I believe that abortion facilities should have some level of regulation. Just like any other medical procedure, abortion should be subject to standards that ensure patient safety. It's useful, in fact, to look at the way other comparable procedures are regulated. Usually, professional associations of clinicians who provide the procedures themselves set standards based on available research evidence and clinical expertise. In fact, multiple health care professional associations recently released such evidence-informed guidelines that apply to abortion facilities, clearly stating that admitting privileges are unnecessary for patient safety. When the government does intervene, laws that apply for other medical procedures like dental surgery ­— which is less safe than abortion — are generally based on the level of anesthesia being used.

The government's approach to tobacco regulation is another useful comparison. When confronted with the evidence that tobacco use can lead to lung disease, heart problems, and other chronic health issues, policymakers implemented regulations around cigarette sales, manufacturing, and advertising. These regulations benefited public health and safety—and they were informed by research and clinical expertise.

Abortion restrictions, meanwhile, are rationalized with anecdotes and ideology. Unfortunately, they are just the latest example of the ways anti-science sentiment has emerged in state legislatures and the nation's highest court. In the same way that climate change denialism and anti-vaccination rhetoric has held progress hostage, TRAP laws substitute feelings for facts. When that approach influences public policy, it puts everyone at risk.

In the past, Supreme Court justices have reasoned that abortion restrictions are unconstitutional because of the lack of data supporting them. Just four years ago, Justice Stephen Breyer wrote that the evidence Texas used to justify its admitting privileges law "does not show how the new law advanced the State's legitimate interest in protecting women's health." It remains to be seen whether the 2020 incarnation of the Court, with its two new justices, requires a similar level of scientific evidence to justify regulating abortion — or if it will rule against science instead.

Sarah CM Roberts, DrPH is an Associate Professor in the Department of Obstetrics, Gynecology, and Reproductive Sciences at the University of California, San Francisco. She studies the ways policies and our health care system punish, rather than support, structurally vulnerable pregnant women.