COVID-19 isn't funny. But making fun of dangerous and stupid political and public responses is important 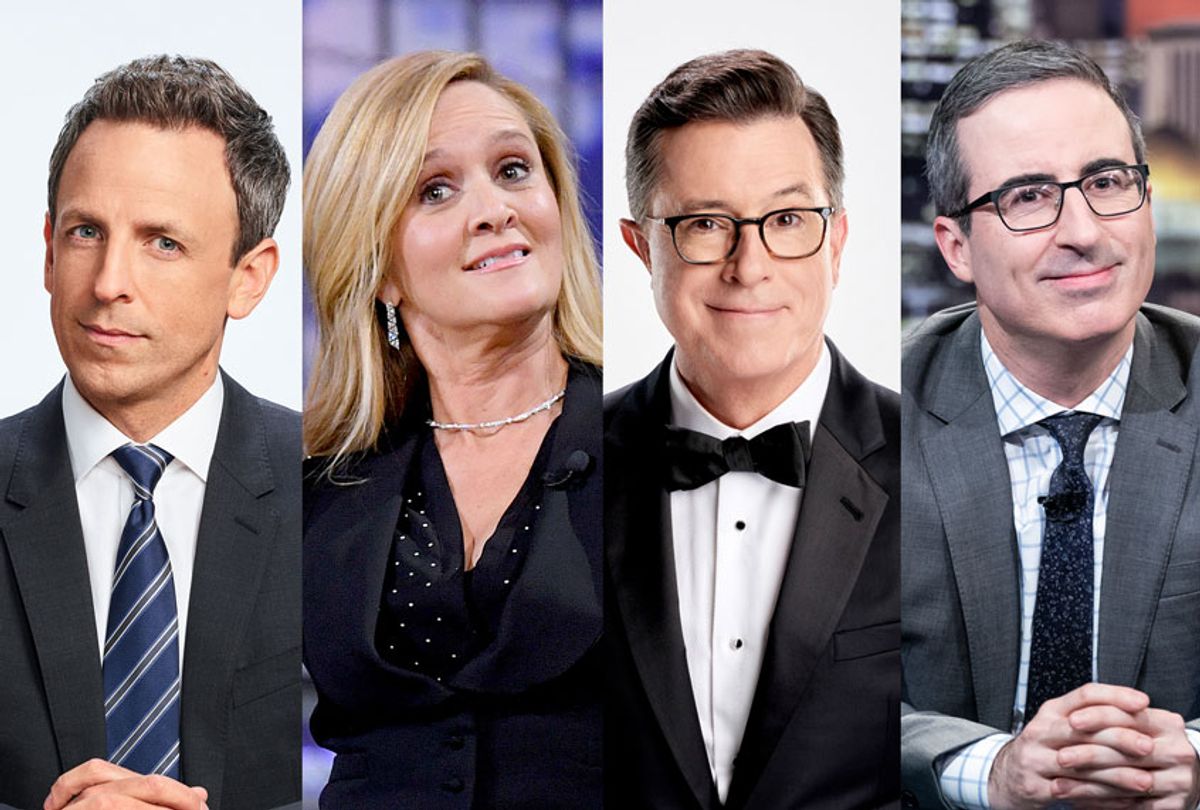 If there ever was an issue that seemed to defy comedy, it is the new coronavirus. I mean, if we were to make a list of off-limit topics for jokes, certainly a contemporary global pandemic would make the list. There is a huge difference, though, between making fun of the virus and making fun of ridiculous responses to it. The pandemic itself might be deadly serious; but many responses to it deserve a great deal of mockery, and that has been especially true for the those coming from the Trump administration.

Corona comedy goes well beyond poking fun at coronavirus-inspired blunders, like Trump suggesting COVID-19 is the same as the flu and that fears over his administration's response are "fake news." Comedians have lobbed jokes at bizarre reactions, like downplaying or dismissing the severity of the virus and the ease with which it spreads. In one hilarious example, sketch comedian Gus Johnson mocked young people who aren't taking the virus seriously and are still going out to parties in a YouTube video seen 1.75 million times.

Much corona comedy takes specific aim at Trump World, which generally has alternated between not taking it seriously, claiming victory for overcoming it, and making things up about it. When Trump ally Rep. Devin Nunes (R-CA) suggested that now is a great time for folk to go out since restaurants are going to be less crowded, he offered comedians an easy mark for mockery.

In fact, the response from the Trump camp has been so absurd that it has been comedians, especially satirical ones, who have done the best job of highlighting how bizarre, reckless and inconsistent they have been. Even when the mainstream news media critiques the Trump team response, it does so while taking him seriously.

For example, Trump boasted on March 6 during a tour of the Centers for Disease Control and Prevention in Atlanta, where he and the press met with doctors and scientists working feverishly to determine the best ways to combat the deadly virus: "I like this stuff.  I really get it.  People are surprised that I understand it.… Maybe I have a natural ability.  Maybe I should have done that instead of running for President."

The absolutely mind-boggling comment led most mainstream news outlets to point out that Trump's comments were both egotistical and incorrect. All true. But not enough.

What comedy offers, and what the public needs most, is to be reminded of how deeply ironic Trump's actions have been. It is ironic that a man elected to lead is incapable of leadership. It is ironic that Trump dismissed the severity of the virus only to then liken it to a war he was going to win. The baseline situational irony that has governed the entire Trump administration can only be countered by the sort of critical irony found in comedic satire.

In fact, satire like that of Samantha Bee, Stephen Colbert, Seth Meyers or John Oliver uses its own ironic, comedic critique to illuminate the complex ways that the Trump response to the virus has been a combination of hubris, stupidity, ineptitude, distraction and disaster. It's a thorny mess to attempt to underscore the ways that these different responses intersect and complement each other, but satire has the benefit of being able to call out BS, make fun of stupidity, and chastise politicians in ways the traditional news can't.

But corona comedy goes even further than simply pointing to the folly, farce, and failures of official responses like those of the Trump team. Where it really shines is in the ways that it displays the very leadership, logic, clarity and calm the public requires in a time of crisis. Ever since the election of Donald Trump, satirical comedians in America have increasingly moved from simply critiquing the failures of politicians and institutions to fighting to support and defend the very system they typically mock. From Stephen Colbert arguing for why Trump should be impeached to Seth Meyers scolding Trump on what it means to be a president to Jimmy Kimmel explaining the merits of socialized medicine, we have had countless examples of comedians acting as moral leaders in the age of Trump.

The severity of the coronavirus pandemic has only taken these actions to a new level. Now our comedians are not just using ironic comedy to help bring clarity to the crisis; they are also showing the leadership our administration sorely lacks.

Taking the impact of the virus seriously has meant that a number of shows have decided to tape without audiences or even suspend taping altogether. Colbert has been remotely taping from his home, and we can expect that a number of comedians will find equally creative ways to reach their audiences. But even with these disruptions, there have still been highlights in the ways that comedians have covered this story. Here are a few:

On March 11, Bee taped "Full Frontal" for TBS without a live audience. In her opening bit, she covered a number of critical issues. She reminded viewers that there still was an election going on, even if CNN seemed to be having trouble covering it, and she pointed out a number of the Trump administration's blatant lies and deliberate acts of disinformation. But the real focus of her segment was on the way that the coronavirus pandemic was leading to an increase in anti-Asian racism in the United States. "I know, I know," she said. "Racism is like America's weighted blanket. When everything is stressful, nothing makes us feel more secure than treating other people like trash."

The real moment when Bee blended comedic insight with leadership was the way that she emphasized the reality that COVID-19 is truly scary, made even more so by the government's mishandling of it. The problem, she explains, comes when we take those fears and translate them into racism rather than productive actions.

On March 11 and 12 Meyers ran back-to-back "A Closer Look" segments dedicated to covering Trump's lack of leadership on the coronavirus pandemic. Characteristic with the journalistic style of "A Closer Look," Meyers ran through a number of critical facts relevant to the failures of the Trump team to take the pandemic seriously, but the real focus of his segments was on Trump's lack of leadership.

"Our government is massively failing us at a time when the nation is looking for guidance," Meyers said at the end of the March 12 segment. "So now it's up to the media, public health officials, workplaces, and individuals to take this seriously, practice caution, and lead where the president is failing."

On March 11, "The Daily Show with Trevor Noah" focused on the fact that misinformation about COVID-19 was spreading faster than the virus itself. Pointing out the absolutely insane obsession with hoarding toilet paper, Noah stated, "some people are letting their panic make them dumb as s**t."

Starting on March 16, Noah began taping from home and avoiding the studio.  At the end of his March 19 segment, he reminded viewers that even though everyone was experiencing challenges, some members of society were more vulnerable. He pointed out that this is especially true for millions of school-aged kids who get lunch from school programs. So, he urged viewers to consider donating to nokidhungry.org or cityharvest.org to help children get a meal.

For his March 16 show, shot in an alternative, audience-less studio with a pared-down staff, John Oliver focused "Last Week Tonight" for HBO on the gap between the truth of the coronavirus crisis and the Trump team's spin of it. Calling attention to the way that Trump alternately claims responsibility for positive developments and denies responsibility for negative ones, he showed a clip where Trump refused to acknowledge that his White House had disbanded the pandemic response team. Oliver sums up Trump's response as "I didn't do it. I didn't know anything about it. Maybe something in the administration did it. Maybe Tony did it. These things happen. I don't know again. We're doing a great job."

That pretty much sums up how Trump deals with anyone asking him to take responsibility for his lack of leadership. Luckily, though, our nation's comedians are stepping up for him.

Late-night comedy in this country didn't always work this way. In the age of Johnny Carson, who hosted "The Tonight Show" from 1962-1992, audiences tuned in to take a break from their days — to unplug and unwind, to get some levity. Under this model, comedians kept references to current events and political issues to a minimum, and if they did dive into a sensitive topic it would often be in a very light manner. Viewers of Carson, for example, were able to tune out the stresses of Vietnam, Watergate and the struggle for civil rights, enjoying a nationwide break that allowed them to collectively laugh at human folly and outright silliness.

This option, of course, still exists. But by and large, the trend has moved away from silly late-night comedy to serious late-night. If it used to be the case that late-night comedy was meant to put you to sleep; now it is designed to wake you up.