Nature surrounds us, even in quarantine

Two new books revel in the evolutionary beauty of weeds, moths, and the quotidian insects that live in our homes 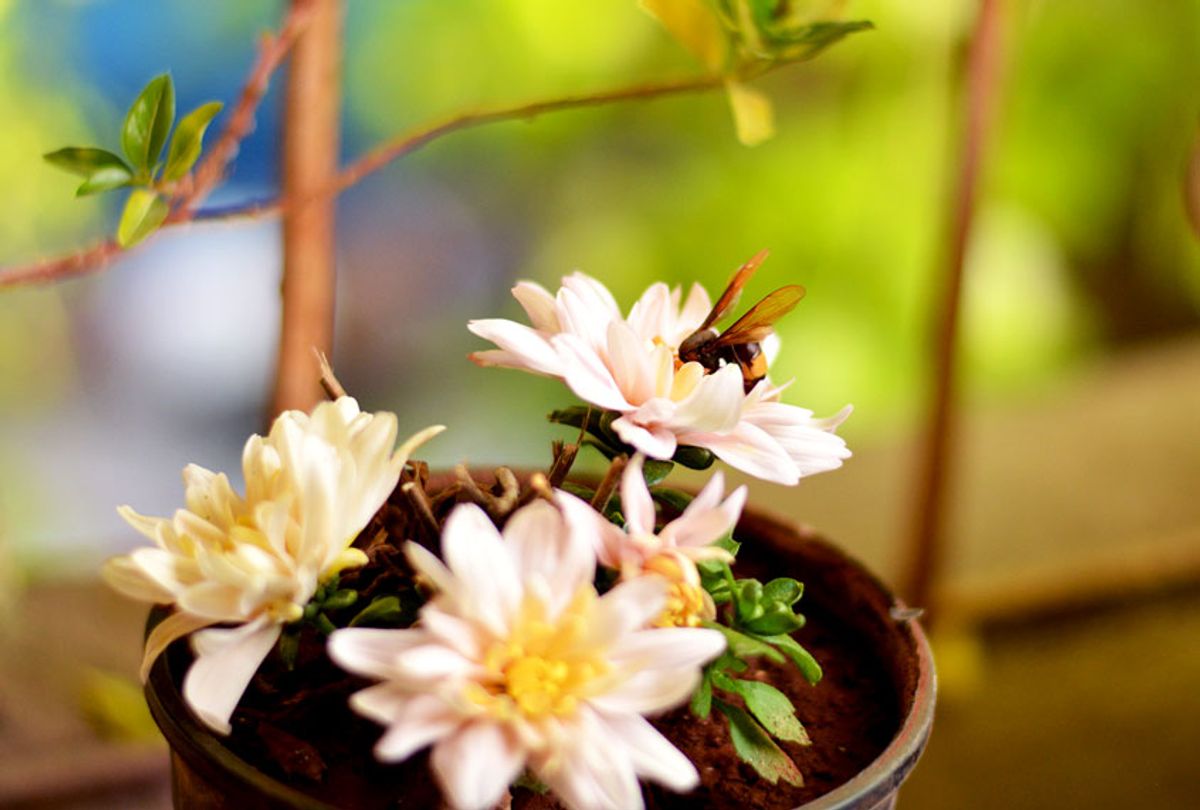 The first time I saw Niagara Falls, I was horrified. I was standing on the American side, looking out at the magnificence of the falls from a parking lot. The pictures of the falls that I'd seen in encyclopedias and travel brochures had misled me into believing I would be sight-seeing in some kind of vast national park. Instead, while the falls roared in the foreground, behind me a gauche splattering of billboards and neon, casinos and hotels sprouted from the asphalt like tall weeds. Here was a natural wonder on par with the Grand Canyon, defiled by capitalism.

Perhaps my knee-jerk reaction was provoked by the way I was taught about nature as a child — specifically,  that there is a binary between "nature" and "human development." Joni Mitchell's song "Big Yellow Taxi" explicates this duality nicely: there is paradise, and there are parking lots, and never the twain shall meet.

Yet a shrewd biologist will assert that this binary is only imagined. Even the most hellish parking lot is teeming with life, even if much of it is near-invisible. Bugs, weeds, bacteria, mold and lichen can spring up in the most urban of settings; beneath our streets, insects, rodents and snakes thrive.

Still, few of us have much respect for the creatures of the parking lot. Who stops to gaze and pen a couplet for the ragweed poking up from the Manhattan sidewalk?

Yet even a blade of grass or a lost pillbug in Manhattan has its secrets. As does the moth flitting about your home, or the ants on the sidewalk, or the moss sprouting off your roof shingles. As I sit writing this amid the coronavirus pandemic, the small bits of "nature" intruding on my home life have started to seem far more meaningful — a means of experiencing the beauty of the natural world while trapped inside. As COVID-19 restricts us to the confines of our homes, it is perhaps time to reflect on the small bits of urban "nature" that we generally ignore or dismiss as quotidian.

This re-envisioning of the natural world is the topic at hand for two new nonfiction books. "Nature Underfoot: Living with Beetles, Crabgrass, Fruit Flies, and Other Tiny Life Around Us," by John Hainze (Yale Press) is what you might deem a "critical reappraisal" of some of the most-ignored (even detested) insects, including house spiders, bedbugs and clothes-eating moths. "The Incredible Journey of Plants" by Stefano Mancuso and translated by Gregory Conti (Other Press) is a gripping series of evolutionary history vignettes about plants that have coexisted either in spite of or due to human intervention.

Mancuso, a plant neurobiologist at the University of Florence, opens his book with an anecdote about nature taking over an abandoned army depot on his college campus. "The proximity of this [building] to my laboratory and the fact that I had studied it [for] so many years allowed me to follow attentively and in detail the advance of the plants," he writes. "I was able to see the velocity, the efficiency, and in a certain sense the strategies with which the plants reclaimed their ownership of the property." He continues:

Two years after the army's evacuation, the entire perimeter wall of the barracks was covered with more than twenty different species: among them, capers, snapdragons, lots of spreading pellitory, and several small ferns. All told, a little botanical garden with a vertical arrangement, and all kinds of stories to tell.

Fifteen years after the evacuation of the army depot, only a few of its structures are still able to resist the onslaught of the plants…. The plants have succeeded in their intent to take back an area that seemed impermeable to life.

The language used to describe plants — their "onslaught," or "advance" — recalls a military operation. As Mancuso argues, plants are not the pacifists they appear. Perhaps it is ironic that a flower is a symbol of peace; such flowering plants are some of the most violent destroyers and reshapers of the land, though they move at a different speed than the human armies we associate with destruction.

At the core of "The Incredible Journey of Plants" is an argument about what plants are — or perhaps what they are not. Mancuso's vignettes about the natural world disprove all the human stereotypes about plants: that they are still, passive lifeforms; that they are not "smart," in the conventional sense of the word; or that they do not talk. They do all these things — just at a different pace and in ways we cannot see immediately. The vacant army depot was annihilated by the plants in a mere 15 years — longer than a wrecking ball would take, though the job was far more clean.

Just as "The Incredible Journey of Plants" gives the reader a new appreciation for weeds, Hainze's book "Nature Underfoot" does the same for household and urban insects. We view insects as part of a binary, as Hainze notes, and those that non-consensually cohabit with humans are often slapped with the slur "pests." Some more than others: ants, silverfish, clothes-eating moths and bedbugs are universally viewed as a menace. Some tolerate spiders, while others have a primal fear.

Hainze quotes Aristotle, who wrote, "we should venture on the study of every kind of animal without distaste; for each and all will reveal to us something natural and something beautiful."

"If we look closely, nature will reveal something beautiful in the most unexpected places," Hainze continues. "It may be at home, in a yard, or in a crack in the sidewalk. The roadside and a vacant lot are paradigmatic environments in the Anthropocene. It here that we find plants and animals that are well known to us but are unexpectedly beautiful — beauty not simply in appearance but also found in the appreciation of multiple adaptations that have led to evolutionary success."

It certainly requires some mind-bending to find such beauty in something that we would regard a pest — the "amazing organisms [that] belong to the mundane part of our lives," as Hainze puts it. Bed bugs fall into this category. I admit that even though I am personally disgusted by them, their evolutionary story is fascinating. Hainze notes that bed bugs likely made the jump from bats to humans back when humans still lived in caves. (Incidentally, the novel coronavirus seems to have started in bats, too.) Humans then brought bed bugs into their built dwellings; the first record of the bed bug-human relationship comes from a 3,500-year-old Egyptian tomb. They followed us into our non-Pyramidal dwellings, too.

As organisms, bed bugs' ways are alien. They communicate chemically, Hainze explains, and use chemical detection via their antennae to seek out hosts. Both body odors and carbon dioxide draw them to us. Astonishingly, these tiny animals' antennae are "as sophisticated at detecting chemicals as the finest analytical chemistry instruments in our laboratories." If only we could draft them into service as scientists rather than tiny vampires.

The human-bed bug connection is culturally rich, too: the English word bug, Hainze writes, "was first used in the seventeenth century to refer to bed bugs. Only later was it used colloquially to refer to insects generally."

If you have had a traumatic experience with bed bugs, thinking about them objectively is likely difficult. Aside from mosquitos, there is no more reviled insect. But are they not part of "nature," in the truest sense?

"Our emotional involvement with bed bugs raises a question about how we relate to nature," Hainze says. "I think bed bugs most certainly are part of nature, though they primarily inhabit our homes. But this is not how we think of nature."

Indeed, both these books bring a new perspective on that hazy term, "nature" — the botanist's view and the entomologist's view. And one can attempt to take on this new perspective while confined. From my window or porch I can observe safely (and with social distance) these kinds of incursions of both the plant and insect variety occurring in my vicinity: the weeds populating the cracks in the sidewalk, slowly destroying it; the spiders keeping watch in the corner of the basement; the moths flitting across my lamp. These oft-despised lifeforms, intermixed with the detritus of the built environment, are part and parcel of nature as we know it. Indeed, the same natural processes that honed weeds and bed bugs also molded the redwood, the orchid, and the blue whale.

"Nature Underfoot: Living with Beetles, Crabgrass, Fruit Flies, and Other Tiny Life Around Us," by John Hainze is out now from Yale University Press. "The Incredible Journey of Plants" by Stefano Mancuso (and translated by Gregory Conti) comes out on March 24, 2020, from Other Press.