Years of austerity weakened the public health response to coronavirus 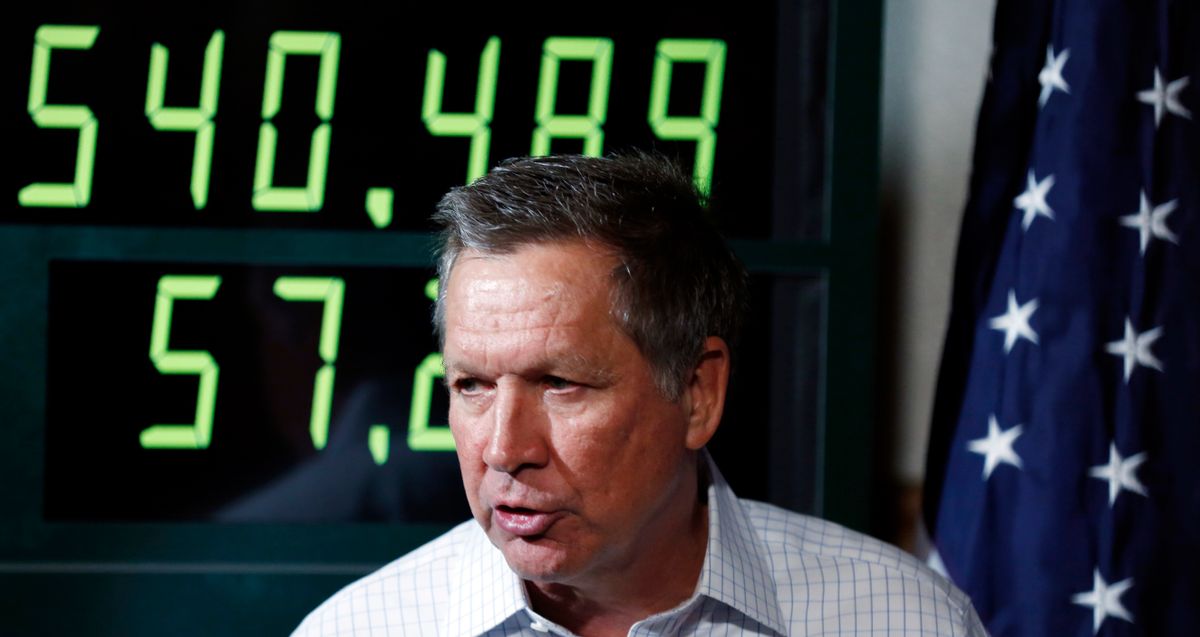 FILE – In this Oct. 23, 2015, file photo, Ohio Gov. John Kasich, a Republican presidential candidate, speaks during a balanced budget discussion with business leaders in Manchester, N.H. As the U.S. national debt ticks toward $20 trillion, Kasich says he is not abandoning his goal of a federal balanced-budget amendment, telling The Associated Press in a Tuesday, March 21, 2017, interview that the issue isn't partisan but critical to sustained economic prosperity. (AP Photo/Jim Cole, File) (AP)
--

Years of austerity at all levels of government, combined with profiteering in the health care sector and the Trump administration's bungled response, have severely weakened the nation's ability to combat the coronavirus outbreak and is putting public health workers on the front lines of the crisis in danger, according to experts and labor advocates.

Underfunded and overworked public health departments are tasked with tracking and stopping the spread of the disease. Hospitals and emergency rooms are struggling to respond to coronavirus cases, amid a lack of key workplace protections and shortages of protective equipment for nurses and health workers. Our health care system has gaping holes that leave millions uninsured and many wary of seeking medical treatment. Tens of millions of workers are without paid sick leave.

These are just a few of the systemic problems boiling up to the surface as COVID-19, the disease caused by the novel coronavirus, continues to spread nationwide and balloon into a public health crisis that is claiming lives and significantly altering daily life for millions.

President Trump, whose preoccupation with the economic fallout of the crisis initially encouraged the spread of misinformation, has certainly hampered the government's response. However, while public health experts and unions representing service workers on the front lines of the outbreak agree that Trump certainly bears responsibility, they also point to countless austerity-minded politicians who came before him.

And while Congress is now mulling a sweeping relief package meant to fill critical gaps in the nation's coronavirus response, critics say the legislation would not do enough to contain the virus and prevent future pandemics.

Consider the state and municipal public health departments that are currently overwhelmed by outbreaks of COVID-19, including significant community spread, in areas across the country. Thanks to budget cuts going back nearly two decades, public health departments nationwide have eliminated 50,000 positions since 2008, according to David Himmelstein, M.D., a professor of public health at the City University of New York at Hunter College.

"Those missing 50,000 public health workers are why our response has been so inadequate," Himmelstein said in an interview.

Employees of public health departments are the "front line" public health workers who are "trained to mobilize" and fight epidemics, Himmelstein said. They also work hand-in-hand with federal authorities, implementing Centers for Disease Control (CDC) initiatives at the state and local level.

"They are the folks who actually go out and when someone is sick with an infectious disease … they track down the people who might be exposed and treat them in the case of treatable things like STDs or hepatitis, or isolate them in the case of COVID-19," Himmelstein said.

Yet funding for public health has been declining for years. Health departments took a big hit during the Great Recession, when state governments cut spending to make up for losses in tax revenue. However, in many states this funding was never restored even as the economy recovered — along with positions formerly held by public health workers who combat the spread of disease.

When adjusted for inflation, state public health spending was actually lower in 2016 and 2017 than it was in 2008 and 2009 when the recession first took hold, according to the Trust for America's Health, a nonpartisan research and advocacy group. From 2015 to 2017, 31 states made cuts to their public health budgets, often because conservatives controlled their legislatures. Only 19 states maintained or increased their budgets during the same time period.

Dalia Thornton, the director of research and collective bargaining at ASFCME, a union representing public service workers, such as teachers, nurses and emergency responders, said public health services were already chronically underfunded before the coronavirus outbreak.

"It's certainly a revenue issue," Thornton told Truthout during a press call on Monday. "Where there was an opportunity to raise taxes at state and local level, officials were nervous about doing that and did not raise taxes and revenues, which is important — that is how we get our public services and fund these critical services that keep us going and keep us moving forward."

Meanwhile, the CDC's core budget has remained relatively flat for the last decade after steadily increasing from 1990 to 2010. Roughly 75 percent of the CDC's budget is funneled directly into programs operating at the state and local level. While the Affordable Care Act attempted to boost federal health spending at the local level through the section of the law known as the Prevention and Public Health Fund, the fund will receive nearly $12 billion less than the law intended by 2027, according to Trust for America's Health. Except for one-time, short-term funding to contain the Zika and Ebola viruses, the CDC's core annual emergency preparedness funding dropped from $940 million in 2002 to $667 million in 2017.

"Before we ever even got here, we weren't funding state and local government in a way that made sense and worked," Thornton said.

The U.S. government spends more than $1 trillion each year on health care, but Himmelstein said public health accounts for less than 3 percent of overall health expenditures. Himmelstein said our health care system is fragmented, separating public health from clinical care, the latter being typically paid for by a convoluted mix of government programs and private insurance providers that profit from patients and their employers.

Under the current system, Himmelstein said, there are no mechanisms to balance funding priorities between clinical care for individuals and public health improvements that benefit society at large. He added that in countries such as Canada and the United Kingdom, which provide universal health coverage through a national system, the proportion of spending on public health is roughly double that of the U.S. Taiwan's response to coronavirus has been heralded as a success, in part because the country's single-payer national health care system made it easier to track and contain the virus.

Unlike the health care system in other developed countries, the U.S. system is shaped by the profit-seeking private insurance companies and health care providers. As a result, Himmelstein said, medical resources are "maldistributed." For example, hospitals serving wealthier parts of the country may have plenty of ventilators and intensive care units for treating COVID-19 patients, while others are scrambling to respond with limited resources and protective equipment for staff. This creates massive holes in the public health response to outbreaks of disease and leaves some communities more vulnerable than others.

Himmelstein said hospitals in lower-income areas and communities of color are more likely to be underfunded and overburdened, because their patients tend to be covered by insurance that provides less profit for providers, if they are covered at all. Lower-income areas may not have enough health care providers to begin with, and these are often the same areas where politicians cut spending on public health.

After weeks of inaction, the Trump administration and Congress are now scrambling to bolster the public health response to coronavirus and mitigate the outbreak's economic damage as businesses shut down and workers are sent home. The Senate is currently considering a federal aid package that Trump has vowed to sign, and while advocates for workers and public health support the legislation, they say Congress must do much more.

For example, the package provides tax credits to employers and requires them to provide paid sick and family leave to workers affected by coronavirus. However, companies with more than 500 employees are exempt from providing sick leave, and this includes many hospitals where nurses and health care workers are among the most at risk of contracting coronavirus.

"This leaves a huge number of workers right where they started," Thornton said.

Thornton said Congress has plenty of options for protecting the public and boosting the public health response that are not included in the bill: All employers should be required to provide paid sick leave, and insurance companies should be required to waive out-of-pocket costs for coronavirus treatment. Currently, insurers are waiving copays and deductibles for coronavirus testing and, in some cases, the initial visit to the doctor, but are not waiving these expenses for treatment of a disease that can be deadly for elderly people and those with underlying conditions. For those with private insurance, the average cost of coronavirus treatment could exceed $1,300.

Congress could also funnel money into public health systems and safety net programs by covering the share of Medicaid costs paid by states and increasing funding for the CDC. Not only would this aid the public health response to coronavirus that has been weakened by years of austerity, it would better prepare the health care system for future outbreaks.

"We need significantly more action to protect not only public workers but the public overall and the economy," said Thornton.