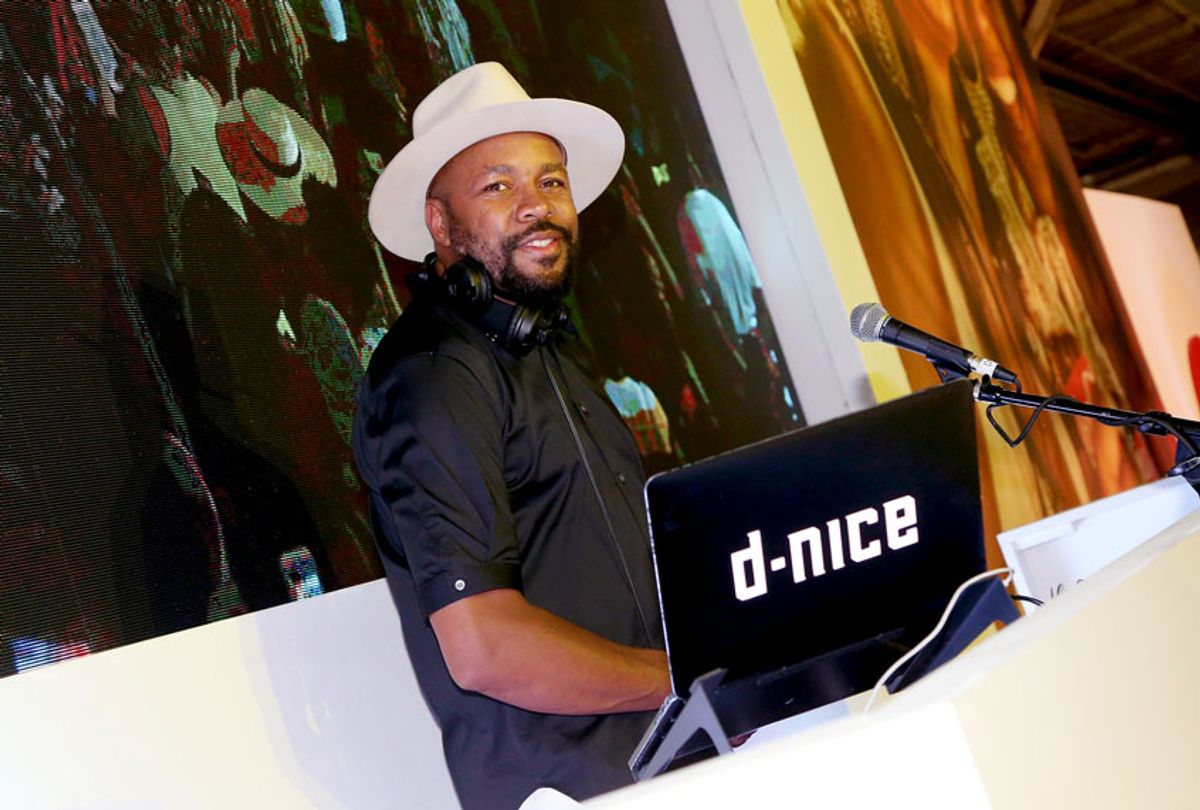 We should all be learning from DJ D-Nice as he is using his knowledge, energy, heritage, and talents to give quarantined people all over the world something to look forward to.

"Yo put your clothes on I'm about to come and grab you! Hurry up, we gonna be late for the club, the party already started!" My friend Nell texted me recently. I had to call him because I wanted to make sure he wasn't losing his mind.

For one, I don't go to night clubs anymore unless a person bigger and stronger physically drags me, but that won't happen because COVID-19 has the world in a headlock, cities are shut down, and clubs aren't even allowed to be open, oh yeah and –– Nell lives on the other side of the country in Los Angles and isn't scheduled to be in Baltimore until the summer.

"Yo, you good, bro?" I asked when he picked up the phone. "We've only been locked in for a week. Are you going to make it?"

He started telling about these wild parties he has been going to since the quarantine had started, the outfits he wore, crisp blazers and loafers that complemented his wife's heels, the army of luxury cars parked out front of the venue and how he tipped the valet $100 just because he could. Then he explained how the lights hit him as soon as we walked in the room. On the other side of the dance floor, the rapper Nas was at the bar toasting with Nia Long, as Stevie Wonder debated with Quincy Jones about melodies, while Joe Biden called people "Bub" and continued to ramble about things nobody understood. Nell said, "Oprah is so down to earth in the real life,"–– but most importantly, he talked about the music. DJ D-Nice spun at every party, every night, delivering a unmatched mix of old school hip hop, R&B, house, and reggae. He then told me that these events take place in his living room via Instagram Live, and I should be joining in too.

DJ D-Nice of Bronx, New York, born Derrick Jones, has had an illustrious career as a pioneering rapper, producer, and deejay that has toured the world and has deejayed for everything from The Super Bowl, The Apollo, and award shows to President Obama's 2012 Inaugural Ball. Many '80s babies like me remember him from his early '90s hit "Call Me D-Nice" –– but dude disappeared from the mainstream visibility after that single blew up and continued to rise behind the scenes –– as a photographer, a producer, and one of the hottest deejays on the New York club scene. Now he is back in the limelight as creator of Club Quarantine, or what he calls his "Homeschoolin': Social Distancing Dance Party" series on Instagram Live, as the most notable virtual deejay ever.

"I'll be at the next party, bro, dressed in all black. Meet you at the bar. I got the first three rounds! Ha."

I didn't dress up like Nell and didn't dance around my livening room like I imagined thousands of people all over the world are doing in pure fun, but I did tune in and watched the impressive numbers grow. The first night I logged on, it had gotten up to 15,000, a day later 35,000, on Saturday night he reached 100,000. Twenty minutes after he started on Sunday, there was 130,000 people tuned in to his live performance. The whole industry was in the comments. Some of the celebs I spotted wereOprah Winfrey, Dave Chappelle, Colin Kaepernick, Bradley Cooper, Diddy, Usher, Jonah Hill, Alicia Keys, Angie Martinez, Rihanna, Ellen DeGeneres, Big Daddy Kane, Earth Wind & Fire, Mary J. Blige, Deion Cole, Dave Chappelle, Biggs Burke, Kareem Abdul-Jabbar, Cam'Ron, Halle Berry, Ava DuVernay, Will Smith and Jada Pinkett Smith, Gabrielle Union, Stevie Wonder, Kelly Rowland, Lauren London, Fat Joe, Bun B, Joe Biden, Naomi Campbell, Spike Lee, Tiffany Haddish, and many more. Even Michelle Obama, our forever First Lady pulled up so I know Barack was probably in the background bussing a two-step.

The setup is beautiful. D-Nice throws on a cool wide-brimmed hat and posts up by a window in his apartment with his mixers fired up, and then he rocks out. The commenters do the rest. They play along just like Nell did, transporting themselves from the confinement of their homes to wherever in the world they want to be, using his music as inspiration, a guide, and definitely a soundtrack, the combination of which delivers a deserved break from anything coronavirus.

What Nell, D-Nice, and all of his new followers are doing isn't new for many black people in America. We didn't enter this country as immigrants in search of opportunity; we were slaves with the sole purpose of providing free labor. Black people were beaten, raped, sold, and lynched in between building and harvesting America's infrastructure. But as brutal and deadly as slavery was, some captured Africans still found a way to create joy in the midst of the worst possible situation as it was crucial in preserving life. According to the collection of slave narratives at the National Humanities Center, lucky enslaved Africans engaged in ". . . after-work gatherings, Saturday rest and games, and Sunday church-going with their slaveholders."

Even though African slaves were stripped of their freedom, many still developed coping mechanisms and survived. Holidays also put some of the creativity birthed from struggle into the fore front. Michael W. Twitty from The Guardian wrote…

"On Christmas morning from Maryland to Texas and from Missouri to Florida, enslaved children played 'catching Christmas gif'' with slaveholders. The first to demand a gift won and, on this day, enslaved children might have their only taste of oranges, grapefruit, peppermints or chocolates and the really lucky ones received a simple toy. Adults received tobacco, new clothing (such as scarves or kerchiefs), little jugs of rum or extra molasses and butter, lard or flour, which was consumed so infrequently it was referred to as 'seldom.'"

I'm in no way saying slavery was anything close to pleasant or comparing being quarantined to being enslaved, rather acknowledging how black people have always had to make the the most out of hard situations, finding ways to survive and even thrive. When the furnace was broke we heated the house up with the stove, ate cereal with forks to preserve milk, converted outdated hand-me-down clothes get converted into unobtainable fashion, we created jazz music out of the pain, just like the hip hop that D-Nice is spinning, and the game goes on. We will always find a way.

D-Nice jams also make me think about the long conversations I have with my best friend Tavon. He's 14 years in on a 27-year bid in federal prison for nonviolent drug crimes. Like all of our close friends, he was raised in poverty, tried to make money in one of the only ways available to him, and is now imprisoned because of such. But like D-Nice, he finds a way to have fun. He told me stories of talented inmates who rap and write songs that they perform in front of small crowds that include correctional officers and even jail administrators. A couple years ago one of his cell buddies had a cell phone and he'd Facetime or video chat me on the IMO app. Some nights I'd go out to clubs, even though I hate the club,  and wave my phone around at the crowd so that he would feel like he was in the party too. Sometimes he'd be in his cell alone, and a small group of inmates would gather around –– some bringing jailhouse liquor to sip and dancing as if they never did a day. That is the kind of magic D-Nice is currently creating.

The most impressive thing about D-Nice's "Homeschoolin'" is that he does it alone; there is nobody in his apartment with him, meaning that he is maintaining a crazy global party with tens of thousands of people in attendance and doesn't even have audience reactions to play off of. It's purely genius and the true definition of social distancing. I wish more people would follow his lead. There is a list of things we can choose from to be upset about right now, but D-Nice is giving us a reason to be proud while making us, well some of us, dance the pain away, and I'll take that any day of the week.

So I'll see you at the party tonight. Just meet me by the bar.