Hasn't he done enough damage? Now Trump is giving fake medical advice from the White House, based on "a feeling" 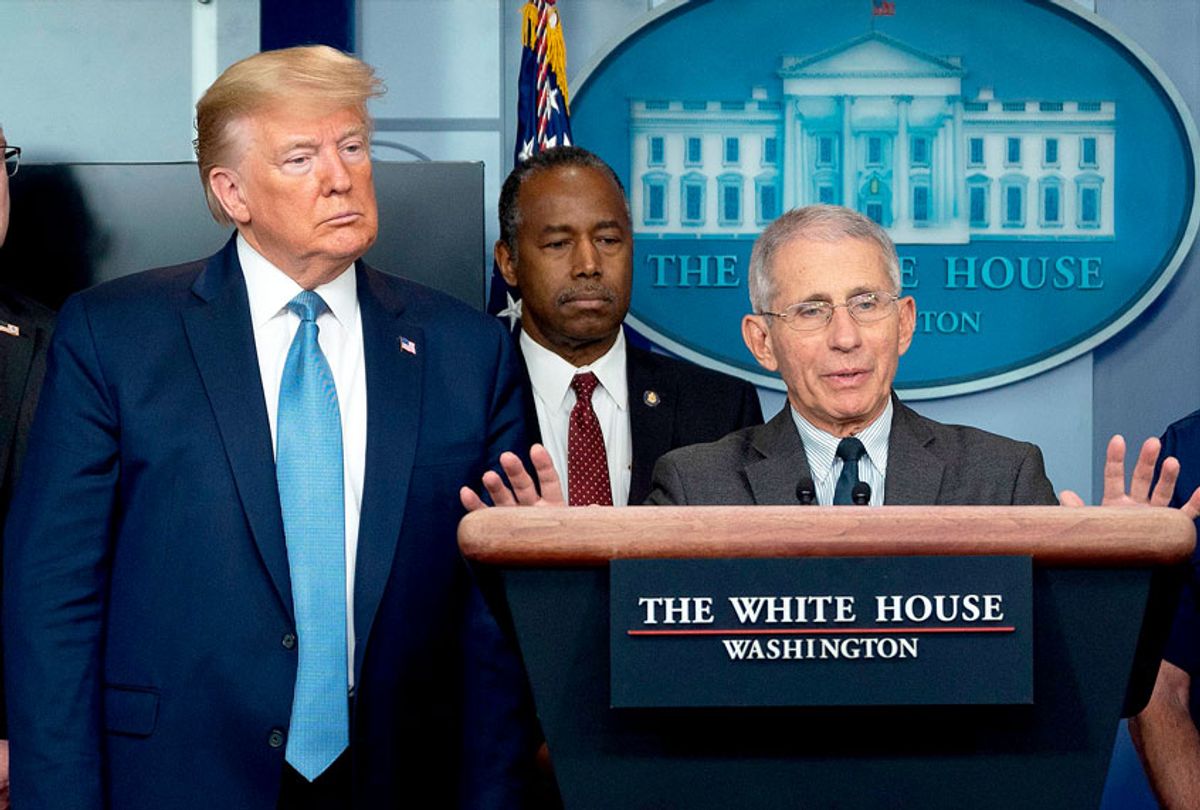 Gupta wasn't talking about Trump's livid rant at NBC reporter Peter Alexander, who had just asked him, basically, if he had any empathy for "Americans who are scared." (See Washington Post reporter Aaron Blake's excellent exegesis about that.)

Gupta wasn't talking about Trump's transparently false hemming and hawing to the effect that he had invoked federal authority to mobilize industry to provide coronavirus resources. He hadn't. (New York Times reporters Katie Rogers, Maggie Haberman and Ana Swanson skewered that quite nicely.)

What Gupta was talking about was Trump's bizarre, desperate huckster sales pitch for a drug that has no proven effects on the coronavirus, but that he insisted he has a good feeling about. He said it could be a "game-changer." Here's the video.

Trump was at the White House podium peddling a fake cure for a virus that could kill hundreds of thousands of Americans in a way that would have gotten him kicked off the Home Shopping Network and potentially invited federal prosecution for false claims and fraud.

Just the other day, FDA commissioner Stephen Hahn wrote an op-ed for USA Today warning about people like that. And he tweeted:

When reporters asked Tony Fauci, the director of the National Institute of Allergy and Infectious Diseases, whether the drug hydroxychloroquine was effective at preventing coronavirus, he said simply: "The answer is no."

Indeed, Fauci explained that the only evidence that the drug (also known as chloroquine) is effective is anecdotal — which is a scientist's way of saying it means nothing. "It was not done in a controlled clinical trial — so you really can't make any definitive statement about it."

But Trump, to put it mildly, was not deterred.

"I think without seeing too much, I'm probably more of a fan of that than — maybe than anybody," Trump said. "But I'm a big fan. And we'll see what happens. I have seen things that are impressive. And we'll see. We'll know soon."

But I will say that I am a man that comes from a very positive school when it comes to, in particular, one of these drugs. And we'll see how it works out, Peter. I am not saying it will, but I think that people may be surprised. By the way, that would be a game-changer.

Alexander asked Trump if he would agree with Fauci's belief that there was "no magic drug." Trump wouldn't go there.

"I think we only disagree a little bit. I disagree," he said. "Maybe, and maybe not. Maybe there is, maybe there isn't. We have to see."

Alexander asked Trump "is it possible that your impulse to put a positive spin on things may give Americans a false sense of hope?"

Trump sarcastically called that a "lovely question" then went on to say:

Trump even indicated he envisioned many Americans taking it, to find out.

And we have certainly some very big samples of people. If you look at the people, there are a lot of people that are in big trouble ….

Let's see what happens. We have nothing to lose. You know the expression: "What the hell do you have to lose?"

Fauci tried to clean things up without ticking off Trump, which is basically an impossibility.

"There really isn't that much of a difference in many respects with what we're saying. The president feels optimistic about something — his feeling about it," Fauci said. "What I'm saying is that it might be effective — I'm not saying that it isn't. It might be effective. But as a scientist, as we're getting it out there, we need to do it in a way that while we are making it available for people who might want the hope that it might work, you're also collecting data that will ultimately show that it is truly effective and safe under the conditions of COVID-19."

Fauci pushed back a bit more assertively on Trump's assertion that chloroquine is safe, based on decades of use for malaria. "What we don't know is when you put it in the context of another disease whether it's safe," he said. "I think it probably is gonna be safe. But I like to prove things first."

Trump's response to the coronavirus crisis has been all over the place — but never in the right place. He started off denying it was a problem, eventually asserting that he had it all under control. More recently, as the Washington Post's Blake put it, "While Trump may not be downplaying the coronavirus as much as he used to, he sure is overplaying some of the measures that can be used to combat it."

One consistent theme is that almost nothing he says can be trusted. Or, as the headline over an NBC News article by Shannon Pettypiece put it, "Trump's coronavirus claims haven't matched response reality." Pettypiece wrote:

To hear President Donald Trump tell it, there is a website where you can find out if you need to get tested for coronavirus, and millions of testing kits available for anyone who needs one. There is an approved treatment, a vaccine coming soon, plenty of protective masks in circulation, and a ship that will be off the coast of New York next week to help patients.

But the president's description of the state of measures being taken by his administration stands in sharp relief to the reality being described by the experts on the ground involved in the response. And so the president, who was criticized early in the crisis for downplaying the risk posed by the virus while health officials were sounding the alarm, now faces claims that he is overplaying the available assistance.

There is something particularly disturbing about Trump hyping a questionable drug while he mismanages a public-health emergency.

What Americans need is factual, actionable information about what they can do to combat the pandemic. But Trump's instinct is to downplay the outbreak — it's what he did for months, prior to this week — and to assure people that he has everything under control. So he puts a positive spin on a drug that doesn't have much evidence behind it for Covid-19, and his own expert has to step in and gently correct him .…

During a public health crisis, this kind of misinformation isn't just unhelpful, it's dangerous. As historian John Barry told Vox, the government's misinformation and lies during the 1918 flu pandemic likely caused more deaths and suffering: "It was a disaster. People lost faith in everything — in their government, in what they were being told, in each other. It just isolated people even further. If trust collapses, then it becomes everyone for themselves, and that's the worst instinct in a crisis of this scale."

Gupta, shaking his head, put it this way on CNN:

It just was a remarkable sort back and forth between someone who's using their gut instincts, not scientifically-based, not evidence-based, against, you know, a venerable scientist who kept on — on the fly, it seems —  trying to fact-check the president. I just have never seen anything like it. I think Tony Fauci probably has one of the hardest jobs in America right now.