"You can't have a functioning economy if you have hospitals overflowing," Graham says 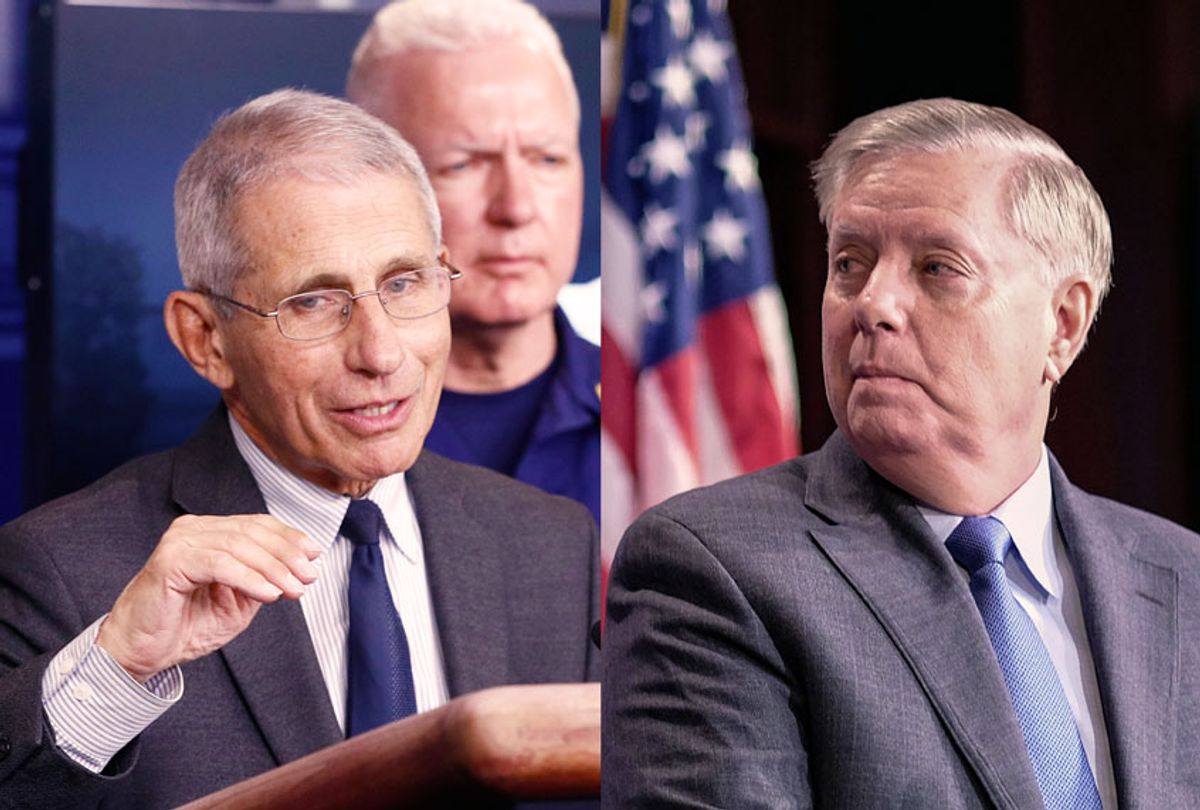 Dr. Anthony Fauci, the top infectious disease expert in the country, has lobbied administration officials and Republican lawmakers like Sen. Lindsey Graham, R-S.C., in an attempt to dissuade President Donald Trump from easing coronavirus restrictions, according to a new report.

Trump on Monday echoed a growing number of conservative voices who have advocated for restarting the economy despite a potential threat to human life.

"This could create a much bigger problem than the problem you started off with," Trump said. "You look at automobile accidents, which are far greater than any numbers we are talking about. That doesn't mean we are going to tell everybody no driving with cars."

Asked whether Fauci agreed about the "need to reopen the economy soon," Trump replied: "He doesn't not agree."

But Fauci does disagree, and he has warned administration officials and lawmakers that "prematurely scaling back social-distancing measures would hamper efforts to mitigate the virus and would devastate hospitals," The Washington Post reported.

Fauci appears to have already convinced Graham, a staunch ally of the president.

"It would be a major mistake to suggest any change of course when it comes to containment," Graham told the outlet. "I just spoke with Dr. Fauci. He believes that, if anything, we should be more aggressive and do more . . . You can't have a functioning economy if you have hospitals overflowing. People aren't going to go to work like that."

Scott Gottlieb, Trump's former head of the Food and Drug Administration, similarly warned that "it should not be lost on anyone that there's no such thing as a functioning economy and society, so long as COVID-19 continues to spread uncontrolled in our biggest cities."

Trump, however, has appears to have been prioritizing advice over how to proceed from economic advisers rather than medical experts.

"The president is right: The cure can't be worse than the disease," top economic adviser Larry Kudlow told Fox News on Monday. "And we're going to have to make some difficult trade-offs."

"Extreme measures to flatten the virus 'curve' is sensible — for a time — to stretch out the strain on health infrastructure," former Goldman Sachs CEO Lloyd Blankfein tweeted."But crushing the economy, jobs and morale is also a health issue — and beyond. Within a very few weeks let those with a lower risk to the disease return to work."

Stephen Moore, whose nomination to the Federal Reserve was so controversial that even Republicans refused to move forward with his candidacy, has been a key adviser to the president on the issue.

"You have a classic case of the public health people saying, 'We have to keep everyone sequestered for as long as this takes without any regard to the economic cost.' The economics team is saying, 'If this lasts seven to 10 weeks, there won't be much of an economy to save. From my sources, the view in the White House is shifting toward getting the economy reopened," Moore told The Post. "I'm not in any way disparaging the public health people. They are vital to this process. But you can't have a policy that says we're going to save every human life at any cost, no matter how many trillions of dollars you're talking about."

But the issue comes down to simple math. Hospitals around the country have warned that they simply do not have enough ventilators to deal with a large spike in severe coronavirus cases. Restrictions requiring the public to stay home "flatten the curve" of the infection trajectory and are intended to avoid hospitals becoming overwhelmed and letting people die due to equipment shortages, as has been the case in Italy, which is dealing with the exact same problem.

"We haven't yet even seen signs that the growth is slowing, much less reversing. Now is the time to tighten restrictions on contacts that could transmit the virus, not loosen them," Harvard University epidemiologist Marc Lipstich told The Post. "If we let up now we can be virtually certain that health care will be overwhelmed in many if not all parts of the country. This is the view of every well-informed infectious epidemiologist I know of."