Salon spoke with farmers about how the needs for produce have changed, and what they're doing to counteract it 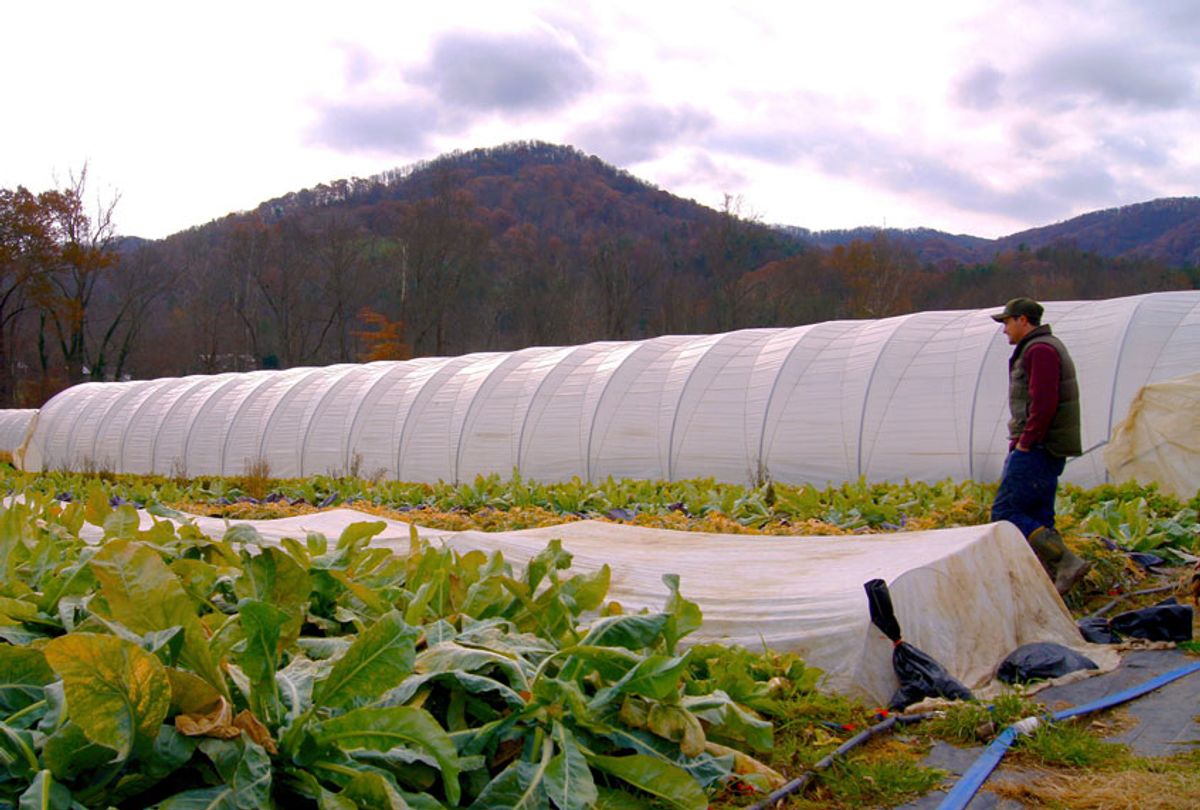 If you would like to support farmers across the United States, consider contributing to the Farm Aid COVID-19 emergency fund.

On a hazy gray morning in November, Evan Chender — tailed by his two sweatered dachshunds, Maple and Lyle — does a lap around his farm. Located about 15 minutes outside of Asheville, N.C., it's an acre and a half bound by mountains and fog. There's no snow on the ground yet, but there is an impending cold front, so white, protective tents dot the property.

Chender moves from tent to tent, drawing aside the entrance flaps with a flourish comparable to that of a veteran performer pulling back theatre curtains for an encore performance, and reveals a list of interesting crops: lilac-tipped sprouting cauliflower, frost-sweetened rutabaga, burgundy and white tardivo, cronses (also known as Chinese artichoke, these tubers have a distinct crunch and a mild sunchoke flavor), and a sprawling bed of sea fennel.

It's not the makings of your big-box supermarket produce section, and that's the point.

"Here at the Culinary Gardener, we produce crops for one market, restaurants," Chender told me at the time. "My entire focus is on growing produce, herbs, things like edible flowers that chefs will ultimately put on restaurant plates." 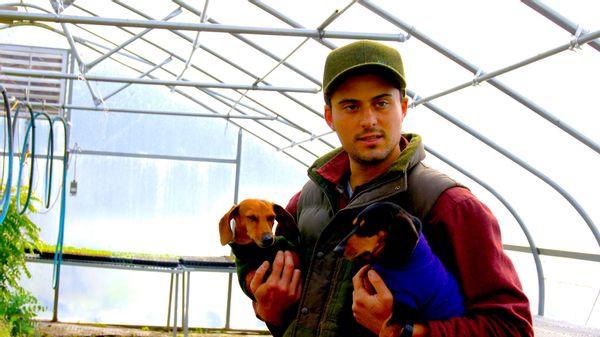 But on March 17, per an executive order from North Carolina Gov. Roy Cooper, all restaurants and bars in the state began to limit operations to takeout and delivery only as a way to prevent the spread of COVID-19; many restaurants in Asheville opted to temporarily close, including Chender's customers.

"Ninety percent of my business dried up overnight," Chender says via phone. "It forced me to have to figure out an alternative plan that I really don't have any experience with."

When I called Chender on March 23, he was in the midst of building a website to host a community supported agriculture (CSA) program, as well as some direct-to-consumer offerings.

"But we didn't plant with the idea of having 100-member CSA, so we don't necessarily have the quantities of a lot of things to be able to give everyone some of them for the CSA," he says with a sigh. "So that's a problem, too."

Chender isn't the only small-scale farmer struggling to adapt to disruptions brought about by COVID-19.

All across the country, restaurants are closing or reducing their service options, and while some states have classified farmers markets as essential businesses — meaning they can remain open — some independently owned markets have opted to close as a way to keep their employees and customers safe.

Jesse Frost is the owner of Rough Draft Farmstead, a three-quarter-acre farm in Lawrenceburg, Ky.

"The governor has been working really hard to make sure that farmers markets can stay open while also emphasizing social distancing," Frost says. "But the challenge with that, for us, is there is still some amount of uncertainty as to how that's going to go and whether or not it's going to stay open." 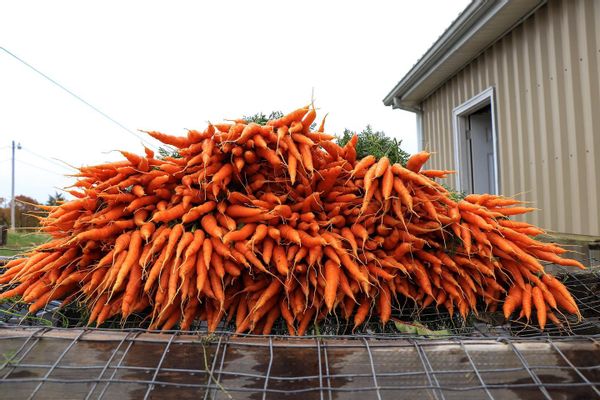 The bulk of Rough Draft Farmstead's business comes from the Lexington Farmers Market, and over the last few seasons, their market sales had grown to the point where Frost was planning on discontinuing their CSA option.

"This is the first year we weren't going to do one," Frost says. "But we had to kind of launch a delivery CSA overnight. And, and that's a challenge on many levels for farmers, but we have to hedge our bets."

"The difference in general, for us, is that when we grow for the farmers market, we grow slightly higher-profit crops with slightly faster turnaround — so you're talking about more greens, radishes, lots of lettuce, more niche products" he says. "But when you're growing for a CSA, you're growing a bigger variety, you're growing more sustenance crops, like more carbohydrates, more potatoes ,and maybe a wider range of heirloom tomatoes and those sorts of things."

Chender is running into this issue as well.

"So last year, we probably sold around $40,000 worth of edible flowers and those pretty much lost all their value immediately," he says. "We also grow a lot of high-value greens this time of year that we sell for like $32 a pound, and it's going to be really hard to get value out of those, just because a $25 CSA share doesn't give you that much wiggle room to put stuff like that in there."

That's because, Chender explains, people obviously tend to want what they perceive to be a good amount of produce for the price of a CSA share — and by putting some of those high-value crops in there, the volume of what is in the box may be smaller.

But in the face of picked-over supermarket shelves from a week of panic-buying, some small farmers are actually seeing a surprising uptick in business.

"It's been a wild ride, says Luke Groce, the owner of Groce Family Farm, a small-scale livestock farm in English, Indiana. "Sixty percent of our business was restaurants and two weeks ago was one of my biggest restaurant sales weeks ever, but we've, of course, only sold a tiny fraction [to restaurants] since then." 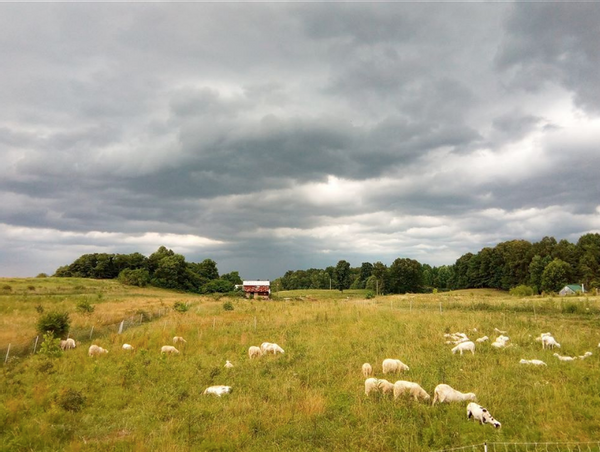 But then a week ago, Groce started noticing a serious uptick in hits on his website and more sign-ups for the farm's year-round meat CSA.

"So I started offering one-time bundles, with delivery included, to the metro Louisville area and in six days we got about 65 orders," Groce said. "Or stated another way, I did eight weeks' worth of business in eight days — after my biggest customers all basically shut down."

Groce says he had inventory and delivery and website infrastructure in place, and "just had to pivot to where people's current demands, needs, and concerns are."

He also thinks that the current supply chain disruptions are highlighting shifts in how people get their food and, Groce says, this is just the beginning. But many farmers, including Frost and Chender, just hope that there's an end in sight.

If you would like to support farmers across the United States, consider contributing to the Farm Aid COVID-19 emergency fund.