"No one is too important to disregard guidance to self-quarantine pending test results," GOP's Martha McSally says 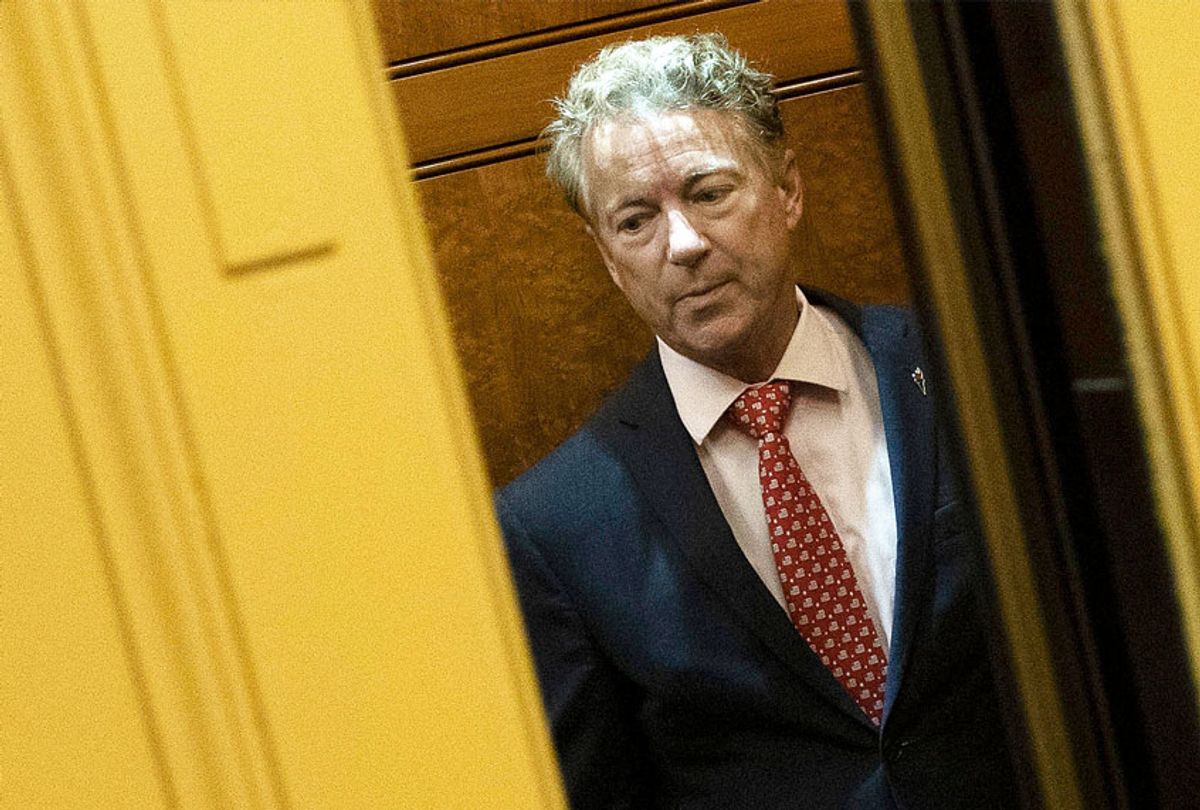 Sen. Rand Paul, R-Ky., defended his decision to ignore federal guidelines and show up to work for nearly a week after being tested for the new coronavirus.

Paul's office announced Sunday that the senator was "feeling fine" even though he had tested positive for COVID-19. Even though Paul was tested on March 16 out of an abundance of caution, he continued to show up to work in the Senate for the following six days, including a vote against a coronavirus relief bill, according to The Washington Post.

Paul, who is a medical doctor, met with other Republican senators, gave speeches and played golf after defying guidelines warning those who are tested for the virus to self-isolate until their results are returned. Republican senators told CNN that Paul hit the Senate-only gym in the hours before his results came back positive.

Utah Republicans Mitt Romney and Mike Lee said they would self-quarantine for 14 days after being in contact with Paul. The Senate gym was shuttered after Paul's diagnosis.

Sen. Shelley Moore Capito, R-W.Va., told CNN that "his office is right next to mine."

"Knowing he had a test outstanding and still continuing to (be in public) — there's obviously a reason that he got a test," she said. "That causes a question for me."

Paul's fellow senators are "especially frustrated with him, because he is also a doctor, and they feel that he should have known better," Senate sources told CNN.

"Furious. Staff, too. Everyone," a senator told the network.

Paul defended his decision not to self-quarantine Monday, even though other members of Congress who were tested for COVID-19 all self-isolated until their results were returned.

"For those who want to criticize me for lack of quarantine, realize that if the rules on testing had been followed to a tee, I would never have been tested and would still be walking around the halls of the Capitol," Paul said in a statement. "The current guidelines would not have called for me to get tested nor quarantined. It was my extra precaution, out of concern for my damaged lung, that led me to get tested."

"If he had been following these guidelines, he wouldn't have been infecting others because of social distancing, washing your hands, doing everything that we talked about," Birx said Monday. "I got a test late Saturday night, and I'm negative. I stayed home another day just to make sure. That is how we protect one another. So, you know, unless everybody is taking their temperature every day, we can't say that he had no symptoms. These are the kinds of things we have to do for one another. This is the personal responsibility that I'm talking about that we all have to practice."

Senators from both sides of the aisle publicly chided Paul after learning that their colleague potentially exposed them to the virus.

"I've never commented about a fellow Senator's choices/actions. Never once. This, America, is absolutely irresponsible. You cannot be near other people while waiting for coronavirus test results. It endangers others & likely increases the spread of the virus," Sen. Kyrsten Sinema, D-Ariz., tweeted.

"I couldn't agree more," Sen. Martha McSally, R-Ariz., added. "As we ask all Americans to sacrifice their livelihoods and alter their behavior to save lives, we must ourselves model appropriate #coronavirus behavior. No one is too important to disregard guidance to self-quarantine pending test results."

Dr. Ezekiel Emanuel, a former Obama health adviser who now advises the World Health Organization, argued that Paul violated his oath as a doctor by flouting the guidelines.

"This lack of leadership . . . things we're asking the public to do that is not being emulated by our public officials and especially by a physician," he told MSNBC. "Multiple times Rand Paul has sort of violated his basic oath of being a physician, that he should model good, healthy behaviors."