The COVID-19 stimulus can't be a corporate bail-out. We need a new playbook for relief 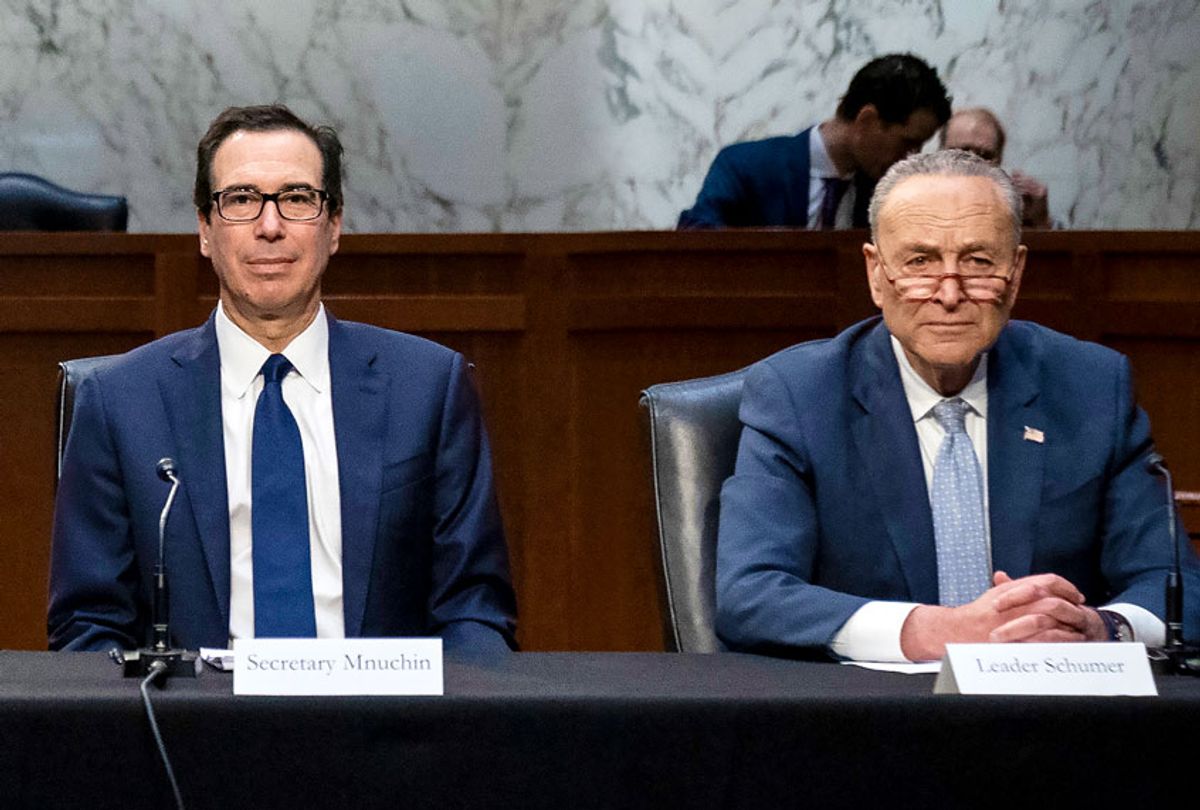 Three years ago, in an ugly display of pigs feeding at the trough, there was a rush of special interests to take advantage of a secretive tax bill moving quickly through the Senate, with tens of billions of dollars going to certain industries, like real estate. We saw what happened: a short burst of economic growth that turned out to be remarkably weak, given the size of the deficit that it brought about. This year, growth was expected to decline to anemic levels—lower than 2 percent. While the predicted 1 trillion dollar deficits quickly emerged, the promised increases in investment and wages did not, as corporations paid out almost a trillion dollars in share buybacks.

This is all prelude to the current debate over responding to the COVID-19 crisis. Had big business not treated itself so well, it would have had an ample cushion to weather the storm. Had it lived up to its promises of greater investment and higher wages, Americans would have placed greater trust in it;  likewise, if it hadn't resisted giving workers a measly 10 days of sick leave even limited to the crisis itself.  Our democracy and economy is at great risk if we respond to COVID-19 by giving money to the loudest and most powerful corporate voices rather than thinking through where funds are most needed. Our fiscal position is at risk if we don't work out the best way to provide the money. America is a rich country able to run large deficits, but that doesn't mean that resources are unlimited. Inevitably more money in corporate largesse means less money for those who need it, and more inequality. The well-being of Americans today is at risk if we don't think carefully about how best to deliver money to those who need it now.

Businesses—like many American airlines—that squandered the opportunity to build up cash reserves should be held accountable. But the costs should be borne by their shareholders, who have already been amply rewarded. Bankruptcy is not the end of the world. Chapter 11 maintains the company but forces the shareholders to pay the price for their mismanagement.

Capital markets won't be functioning as they normally do, so there is a role for government—to provide funds, convertible bonds and/or loans with warrants, so the government doesn't just bear the downside risk of the loans not being repaid but participates in some of the upside. There should be no gifts to corporations. And like IMF and World Bank loans, any government bailouts should come with "conditionalities," such as no buybacks, limited dividends and CEO pay, a promise to keep workers on the job, and better treatment of stakeholders other than shareholders and management—including workers and the environment.

But states are limited by their constitutions from deficit financing. The issue here is not just access to loans, but the very ability to borrow. It is only the federal government that can borrow. The states and localities will need money urgently as their revenues plummet. Without this money, they will be forced to cut back essential programs in education, health, and welfare. There needs to be a massive temporary revenue-sharing program.

The non-profit sector—schools, universities, research institutions, welfare agencies, etc.—are another important part of our economy, no less important because they aren't organized for the kind of lobbying that big business does. Their endowments have shrunk by a third and contributions will almost surely be down as donors' incomes dwindle. Universities will be especially hard hit as foreign enrollment steeply declines.

This sector is central to caring for the vulnerable. And where would we be without their insight and research into understanding the virus that is causing such havoc! We can't jeopardize our future simply because these institutions and organizations make fewer campaign contributions than big corporations.

Fortunately, everybody seems to agree that small businesses and the most vulnerable citizens need extensive help. The loan program for small businesses seems a reasonable way to get money to them quickly—if the Trump administration has the capacity to deliver. But the question of administrative capacity is even more central to delivering money quickly to the tens of millions of Americans who live on the edge.

For decades, there has been an attempt to defenestrate government, to weaken its capacities, and never more so than in the past three years. Do we have any confidence that the government could deliver checks in two weeks, as Trump has said it should? Argentina announced a program for helping every child on Tuesday of last week, and by Friday, every family had the money. I doubt that we could do that. A suspension of evictions, foreclosure, and interest on all debts is a necessary interim measure. Otherwise, with so many credit cards charging usurious interest rates of 20% or more, debts will accumulate rapidly, creating a hole from which the poor may never be able to dig their way out, made all the worse by the 2005 bank-friendly bankruptcy act that makes it so hard for workers to discharge their debts in personal bankruptcy. Other countries, like Denmark, with far more administrative capacity than we, have chosen another route: asking employers to continue paying (a large part) of wages and salaries for employees not to show up at work, to be reimbursed by the government. In effect, the companies are temporarily managing the unemployment insurance program, recognizing scaling up existing programs in the manner required is not feasible—let alone creating an entirely new program.

This economic crisis is different from any other.  We can't use the same playbook.  Today, it's not about stimulus—the problem is not lack of aggregate demand. New problems require new solutions and new priorities. Still, we should learn some lessons from the past: corporate give-aways almost never work.

Joseph E. Stiglitz (@JosephEStiglitz) is a university professor at Columbia, the 2001 recipient of the Nobel Memorial Prize in Economics, a former chairman of the Council of Economic Advisers, and a former chief economist of the World Bank. His latest book, "People, Power, and Profits: Progressive Capitalism for an Age of Discontent," will be released in paperback on April 21.