Kushner has "thrown out the established government plan" on pandemics, and has been swarmed by corporate execs 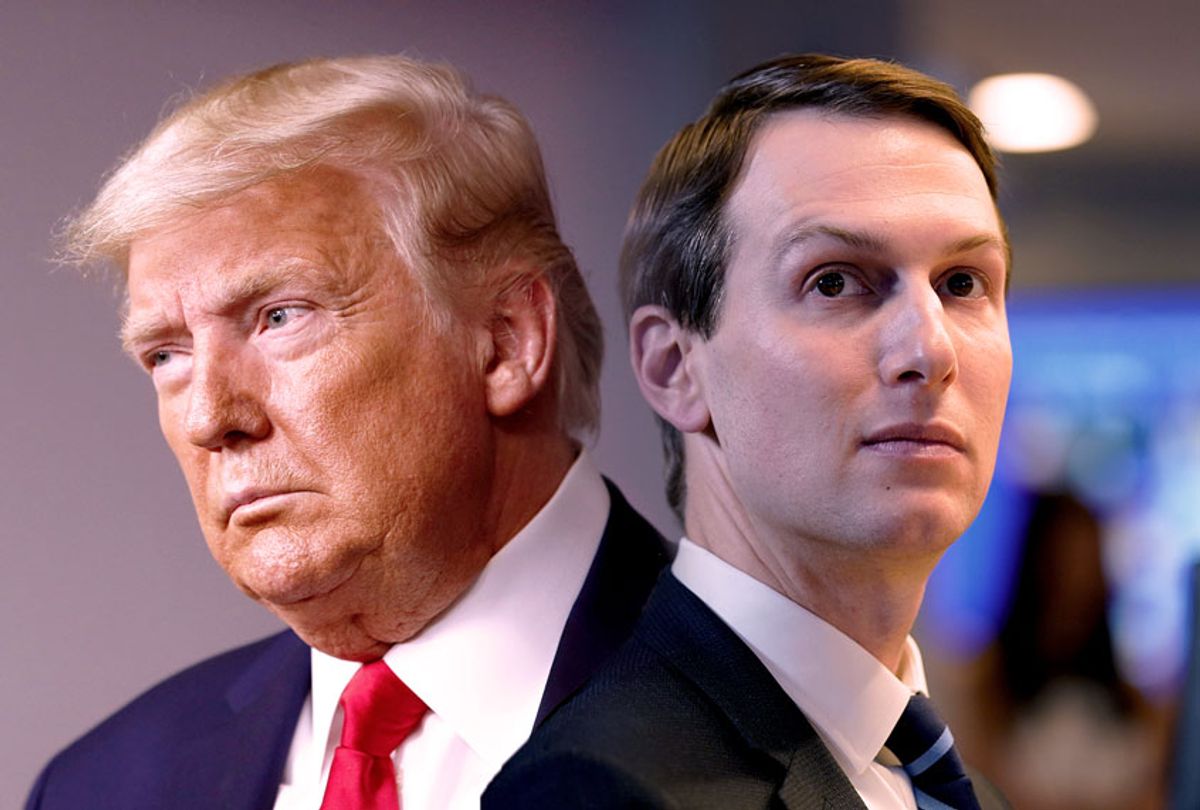 President Trump has refused to use a wartime law to require major manufacturers to make vital equipment to combat the new coronavirus, reportedly after corporations successfully lobbied his top adviser and son-in-law, Jared Kushner.

Last week, Trump signed the Defense Production Act, a Korean War-era law that allows the federal government to force American companies to ensure the availability of crucial equipment. But the president has refused to invoke the law even as governors across the country and lawmakers in Washington have warned that time is running out to stop the exponential spread of coronavirus infections.

Trump falsely compared the law to nationalizing businesses during a White House briefing on Sunday.

"The fact that I signed it, it's in effect," he said. "But you know, we're a country not based on nationalizing our business. Call a person over in Venezuela, ask them how did nationalization of their businesses work out? Not too well."

The law does no such thing. As NPR explained, the law provides loan guarantees and protections for companies that cooperate. It would prevent what New York Gov. Andrew Cuomo has described as a "mad bidding war" between states to secure critical equipment like masks and ventilators and allow the federal government to better control the distribution of this equipment to states that need it most.

"Right now, shortages of critical medical and personal protective equipment are harming our ability to fight the coronavirus epidemic, endangering frontline workers and making it harder to care for those who fall ill," said House Speaker Nancy Pelosi, D-Calif. "The President must immediately use the powers of the Defense Production Act to mass produce and coordinate distribution of these critical supplies, before the need worsens and the shortages become even more dire. There is not a day to lose."

As the debate over the law played out behind the scenes, The New York Times reported, Kushner "has thrown out the established government plan for dealing with pandemics, after concluding it was insufficient."

Kushner and other aides pushed for the Federal Emergency Management Agency (FEMA) to take over for the Department of Health and Human Services in overseeing the response effort. Kushner and top economic adviser Larry Kudlow were also persuaded by lobbying from big corporations and the U.S. Chamber of Commerce against using the Defense Production Act, according to the report.

The moves have resulted in FEMA overseeing an operation it is not equipped to handle and companies confused over how to proceed, experts and executives told the outlet.

FEMA administrator Peter Gaynor was unable to say how many masks had been shipped or ordered when asked about the supply of equipment during an interview with ABC News on Sunday.

"When you say 'they,' how many? Which masks? The new masks?" pressed anchor Martha Raddatz.

Trump adviser Peter Navarro said on Sunday that the administration would only invoke the Defense Production Act if companies were hoarding supplies or price gouging. The president insisted that companies like Hanes, Apple and General Motors are already voluntarily working to produce necessary equipment.

But masks being produced by apparel manufacturers are not the N95 protective masks that health care workers desperately need, according to the report. And companies that have offered to help may take months to set up the necessary manufacturing equipment to produce what the government needs.

Without the Defense Authorization Act, the Times reported, industry executives say that companies "are reluctant to crank up production lines without purchasing guarantees from the government," which the law would provide.

Executives also told the outlet it would take "three to five months to obtain and install the necessary equipment and begin production" on items like the N95 masks.

"Ford, General Motors and Tesla are being given the go ahead to make ventilators and other metal products, FAST!" he tweeted.

But the companies he named were less optimistic. GM and Ford declined to say how quickly they would be able to start production while Ford added that it was still assessing whether it is able to produce ventilators.

Trump's reluctance to use invoke the law, even as the number of COVID-19 cases continues to climb and threatens to overwhelm hospital systems, has led to increasingly urgent calls from local officials.

"I have asked repeatedly for the military to be mobilized, for the Defense Production Act to be used to its fullest to get us things like ventilators, so people can live who would die otherwise," New York City Mayor Bill de Blasio told NBC News. "If the president doesn't act, people will die who could have lived otherwise — senior citizens, folks who are members of families."

New York Gov. Andrew Cuomo said during a news briefing on Sunday that Trump's refusal to invoke the law has led to bidding wars between states for vital equipment, leaving some unable to get the supplies they need and others paying exorbitant prices.

On Monday, the governor rejected Trump's claims about "nationalization."

"Let the federal government put in place the federal Defense Production Act. It does not nationalize any industry. All it does is say to a factory, 'You must produce this quantity,'" Cuomo said. "I get that a lot of companies are stepping up and doing good things … but you can't run this operation like that… Yes, it is an assertion of government power on private sector companies. Yes – but so what? This is an emergency."

"Now a tragic and inescapable truth is clear: Even though the senior-most medical and intelligence experts in the United States government were sounding the alarm about coronavirus for months, President Trump neglected, minimized and lied about this virus," Biden said in a statement. "He failed to expeditiously get us enough tests, respirators, ventilators and other vital equipment when his peers in other countries did their duty and stood up for their people."