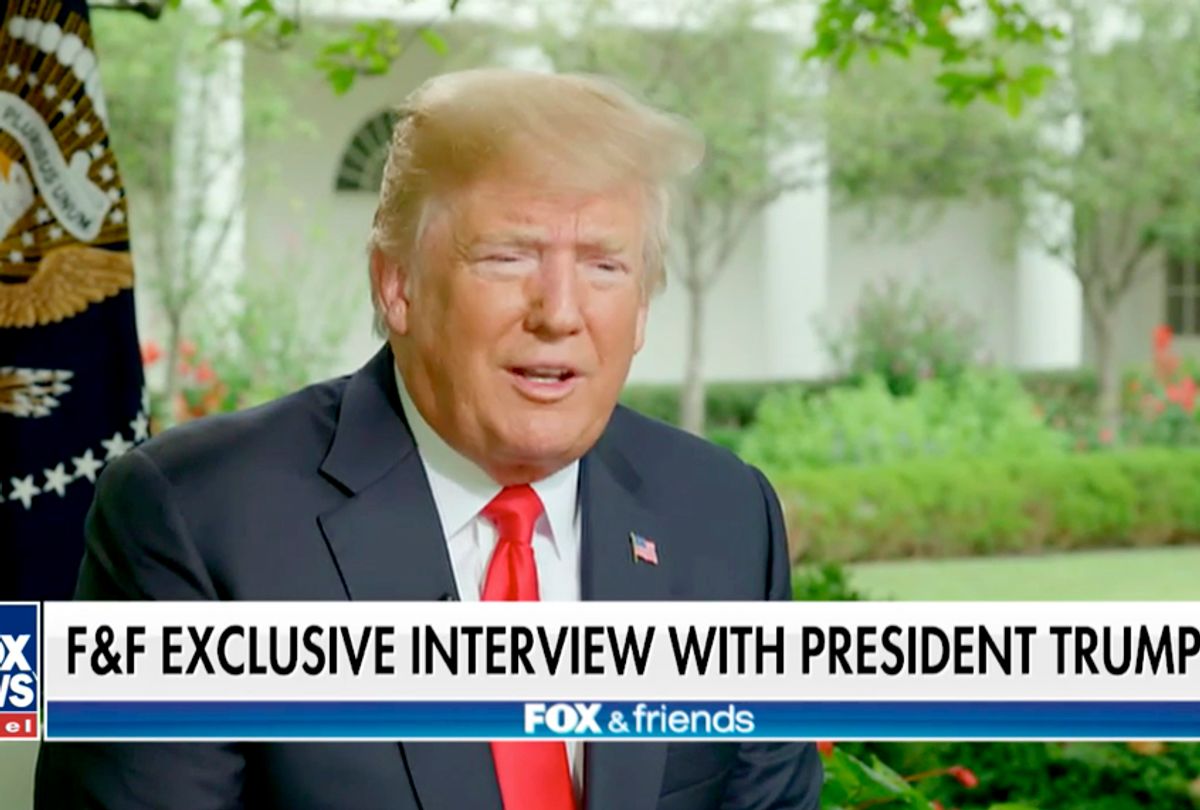 President Donald Trump's appearance for a so-called "virtual town hall" on Fox News Tuesday to discuss the ongoing Covid-19 pandemic crisis was, as expected, filled with lies, distortions, and petty asides that characterize his favored form of rhetoric.

He's still unable to treat the situation with the seriousness it requires, and he seems far too eager to abandon the best public health advice as he rushes forward to advocate returning to normal economic activity. Meanwhile, he's indulging in his own petty feuds and insults to defend an abysmal federal response effort instead of showing the leadership the moment requires.

Here are seven of the most ridiculous parts of the event:

"Do you blame the governor for that?" -- with a smug smirk on his face, Trump tries to pin blame for New York's coronavirus outbreak on Gov. Cuomo because he allowed people to travel from Asia back to New York City during the holidays pic.twitter.com/6syuTlbWdB

Dr. Deborah L. Birx, one of the leading medical experts on the coronavirus task force, tried to give a serious answer explaining why New York City is suffering some of the most severe impacts from the pandemic. But Trump, obsessed with political point-scoring and blame, used the opportunity to get in a dig about Gov. Cuomo. She completely ignored his snide comment.

2. Trump tried to downplay the potential death toll of the coronavirus

Trump claims "much more" people die from car accidents than seasonal flu, and suggests coronavirus does not warrant economic shutdown

Trump either doesn't realize that the death toll for the coronavirus could be much more significant than the cost in human life from car accidents or the flu, or he doesn't care. And he has repeatedly neglected the observation that the timing of the coronavirus outbreak can overwhelm health systems, which may make the morality from nearly all causes worse because it impairs medical treatment.

"He's supposed to be buying his own ventilators" -- Trump is now attacking Andrew Cuomo for saying the federal government should do more to provide New York with needed medical gear pic.twitter.com/qPGd6diWm1

Bloomberg's Noah Smith explained why this attitude is so misguided.

4. Trump continues to refuse any responsibility for his administration's botched testing regime.

"He's supposed to be buying his own ventilators" -- Trump is now attacking Andrew Cuomo for saying the federal government should do more to provide New York with needed medical gear pic.twitter.com/qPGd6diWm1

Trump also claimed that he didn't call the tests "perfect" — but he did. And in fact, they weren't perfect. First, many of the tests were rolled out with significant errors that made them unusable. After that problem was fixed, there were far too few tests to meet the country's demand. The United States may now finally be getting enough tests out, but it's much too late.

Asked about problems with coronavirus testing, Trump oddly pivots to bashing the Ukraine "witch hunt" before absolving himself of all responsibility pic.twitter.com/76qnbQ5Bqz

Trump was particularly peeved at Gov. Cuomo, who said Tuesday that New York will need 30,000 ventilators to deal with the influx of patients. He said the federal government has provided 400 ventilators, and he pleaded for it to produce many more.

6. Trump was far too optimistic about what returning to normal economic activity could achieve.

Trump on the economy: "The faster we go back, the better it's going to be."

This is a big mistake. Trump seems to be assuming that there's some kind of trade-off between public health and the economy. But this is not necessarily so. If the country begins to resume social contact and economic activity too soon, it could make the spread of the virus much worse, and this could be even more damaging for the economy than the initial social distancing measures. Despite Trump's sudden embrace of the phrase, it's far from clear that the "cure is worse than the disease."

7. Trump claimed he made the decision in January to limit travel from China based on "instinct" and said he learned about the coronavirus through media coverage, rather than from the government he oversees.

Asked how he learned about coronavirus, Trump says he saw news coverage + focuses in on China travel ban.

FOX REPORTER: Did someone come to you with a bit of information, a piece of data…

TRUMP: It was instinct… I consulted with Mike… I made a decision to close off to China. pic.twitter.com/u6qNCixJdl

Trump has also repeatedly claimed that his initial decision to limit travel from China was extremely controversial. In fact, he received little pushback at the time. And it was far less effective than he claims.