Despite his false claims, Republicans trust Trump for accurate information on COVID-19 over the CDC

Republicans believe Trump over health experts, despite his extensive history of lying about the new coronavirus 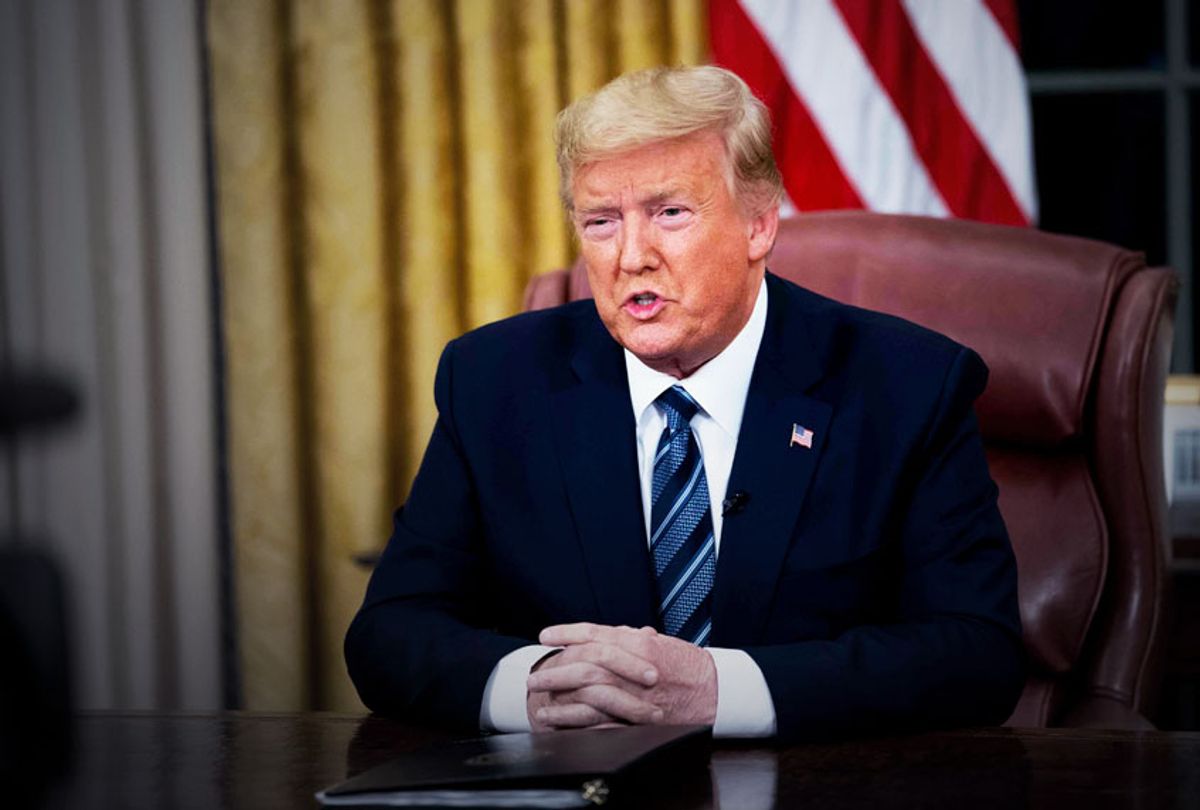 US President Donald Trump addresses the nation from the Oval Office about the widening Coronavirus crisis on March 11, 2020 in Washington, D.C. (Doug Mills-Pool/Getty Images)
--

Republicans are more likely to trust President Donald Trump than the Centers for Disease Control and Prevention on the new coronavirus, though he is widely distrusted among Democrats and independents, according to a new poll.

But the numbers look very different when isolating Republican respondents. The poll shows that 90% of Republicans trust Trump compared to 84% who trust the CDC. Just 13% of Republicans said they trust the national media's information about the coronavirus.

This trend is significant, because Trump's claims about the pandemic have often been at odds with medical professionals. An earlier NBC News/Wall Street Journal poll found that Republicans were largely not worried about the virus and did not plan to change their lifestyle to protect themselves.

Trump repeatedly spread misinformation as he sought to downplay the virus for weeks while it spread around the globe.

"We have it very well under control," Trump said on Jan. 30 as the virus took hold in the U.S. "We have very little problem in this country at this moment."

In February, the president claimed that it "looks like by April" the virus will be gone.

"In theory, when it gets a little warmer, it miraculously goes away," he argued.

Later that month, Trump assured the public that "the numbers are going to get progressively better as we go along."

By late February, he turned his attention to accusing Democrats of pushing a "hoax" by hyping the threat posed by the virus and falsely blamed former President Barack Obama for his own administration's delays in testing.

Even as the country struggled to ramp up testing, Trump falsely insisted that the number of cases was going "very substantially down — not up." He also insisted that a vaccine would be available "very quickly," even though experts said one would come in 12 to 18 months.

As the number of confirmed cases began to heavily trend upward in March, Trump insisted that the virus was no worse than the flu, even though it is much deadlier and more contagious. He claimed that he was "not concerned at all" only two weeks ago.

Over that stretch, Trump repeatedly lied about the availability of tests, botched his announcement of a European travel ban and falsely claimed that his handling of the crisis had an approval rating close to 80%.

Trump finally changed his tune and acknowledged that the situation was "bad" in mid-March, but in recent days the president began to argue that restrictions imposed to try to contain the spread of the virus were worse than the death toll from the disease itself.

During a news briefing on Tuesday, Trump set an Easter deadline to ease restrictions intended to contain the spread but got pushback from Dr. Anthony Fauci, the head of the National Institute of Allergy and Infectious Diseases.

"That's really very flexible," Fauci told reporters. "You need to evaluate the feasibility of what you're trying to do."

Trump insisted at an earlier news conference that Fauci "doesn't not agree" with his plan to lift restrictions in an effort to boost the economy, but The Washington Post reported that Fauci had stressed to officials that restrictions should be more severe — not less.

"It would be a major mistake to suggest any change of course when it comes to containment," Sen. Lindsey Graham, R-S.C., told The Post. "I just spoke with Dr. Fauci. He believes that, if anything, we should be more aggressive and do more . . . You can't have a functioning economy if you have hospitals overflowing. People aren't going to go to work like that."

Journalists worried that Republican subservience to Trump during a deadly pandemic could lead to dangerous consequences.

"They trust Trump more than the CDC or their own governors," MSNBC host Joy Reid tweeted. "They're taking their cues on how to protect their health and that of their families from him, not from experts or even their own governors. This cult of personality is literally endangering people."

"The Republican Party has become a Trump cult," New York Times columnist Wajahat Ali added. "People will be harmed by his incompetence and recklessness. Conservatives who know better speak up. Save lives."