"Fox & Friends" host complains she can't get her nails done: "People are dying, and I realize that"

"My friend died this morning. I'm sorry you cannot get your nails and hair done," a reporter told Ainsley Earhardt 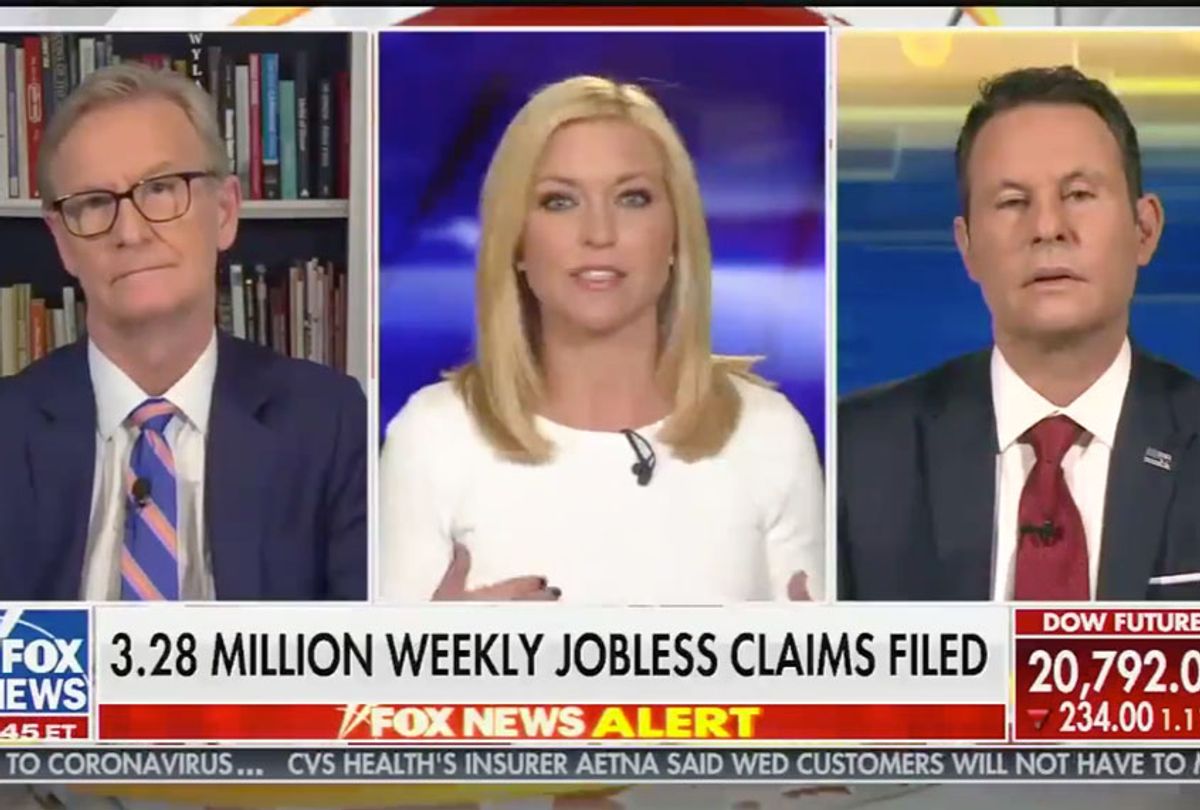 Fox News host Ainsley Earhardt complained that women forced to remain at home to prevent the spread of the new coronavirus "can't get their nails done" during Thursday's edition of "Fox & Friends."

The right-leaning network's hosts have repeatedly echoed President Donald Trump's argument that shutting down the economy is worse than the potential loss of life caused by complications from the virus. Earhardt joined the growing chorus by lamenting the setback of her beauty regimen.

"Women — all my friends are saying — you know, this is not a priority. People are dying, and I realize that," Earhardt said. "But they can't get their nails done."

Earhardt, who appears to be sheltering on the beaches of Long Island as the number of coronavirus in New York continue to climb at a staggering rate, said she does not want to "go back to the city."

"I don't want to be around the area that's affected the most," she said.

"But I'm thinking, like, all the bills that are stacking up at my apartment. You got to think about that kind of thing," she added. "If you bought clothes before all of this happened — if you want to return it, are stores going to wave that 30-day period where you get your money back if you need to return something?"

Earhardt then argued that her male co-hosts failed to see how difficult the lockdowns have been for women.

"Y'all don't think about this, guys ― this is not a priority ― but women have to get their hair done," she said. "I saw someone tweet, 'You're going to see what color our real hair is, because our roots are going to grow in.' Women ― all my friends are saying ― you know, this is not a priority. People are dying, and I realize that. But they can't get their nails done. Businesses are closed everywhere right now. We're in priority mode right now. It's pharmacies and grocery stores. Those are really the only places people are going now."

Earhardt previously joined other Fox hosts in echoing Trump's attempts to downplay the risk of the virus even as the network's owners and top executives took precautions amid the pandemic.

"It's actually the safest time to fly," Earhardt claimed earlier this month as the number of confirmed cases in the U.S. spiked. "Everyone that I know that's flying right now ― terminals are pretty much dead. Ghost towns."

Like the other hosts, Earhardt changed her tone last week after Trump declared a national emergency.

"We have a responsibility to slow down this virus and to think of other people during this time," she said. "And so if you can keep your distance and prevent someone from getting close to you that might be sick, you can save your family, you can save the elderly and help our country as a nation."

Like many of her fellow hosts, Earhardt has since echoed Trump's comments touting unproven medications to treat the coronavirus.

On Monday, she hyped the malaria drug chloroquine, the same drug which Trump has claimed could be a miracle cure as early studies suggest it might not be effective. Doctors have pushed back on Trump's advice after an Arizona man died after ingesting a fish tank cleaner that contained chloroquine phosphate.

"The malaria drug is not easy to find, but it is amazing" Earhardt claimed. "They looked at the map, and they said, 'Where are we not seeing as many cases?' And then they looked at the countries where may of the people take these malaria drugs, and they said, 'Wow, that's interesting. Why aren't they getting it?' They pinpointed it to this drug and to the Z-Pack, and together they're supposed to make a remarkable difference in folks that are having these symptoms. So it's great news."

Co-host Brian Kilmeade pushed back, noting that he was "not sure you take it preemptively." However, Earhardt was unmoved.

"The earlier you take it, they say, the better," she claimed, "But you're not supposed to take it until you first see those symptoms, but you need to take it before you get on a respirator."

"There's not a single person I know who cares about the department store return policy, their roots or their manicures when it comes to people dying," WSB-TV reporter Nicole Carr added. "We should be talking about efforts to continue paying our hair stylists and manicurists if we're still employed."

"Earnhardt also omitted the people who actually perform the services she misses most," Jezebel's Shannon Melero wrote. "Who cares that the person who does her hair may lose her livelihood and that person's life may never be the same after this kind of recession? The real victims are Earnhardt and all of her friends who left the city and are stuck isolating in their country homes. I wonder when they'll start the GoFundMe campaign."