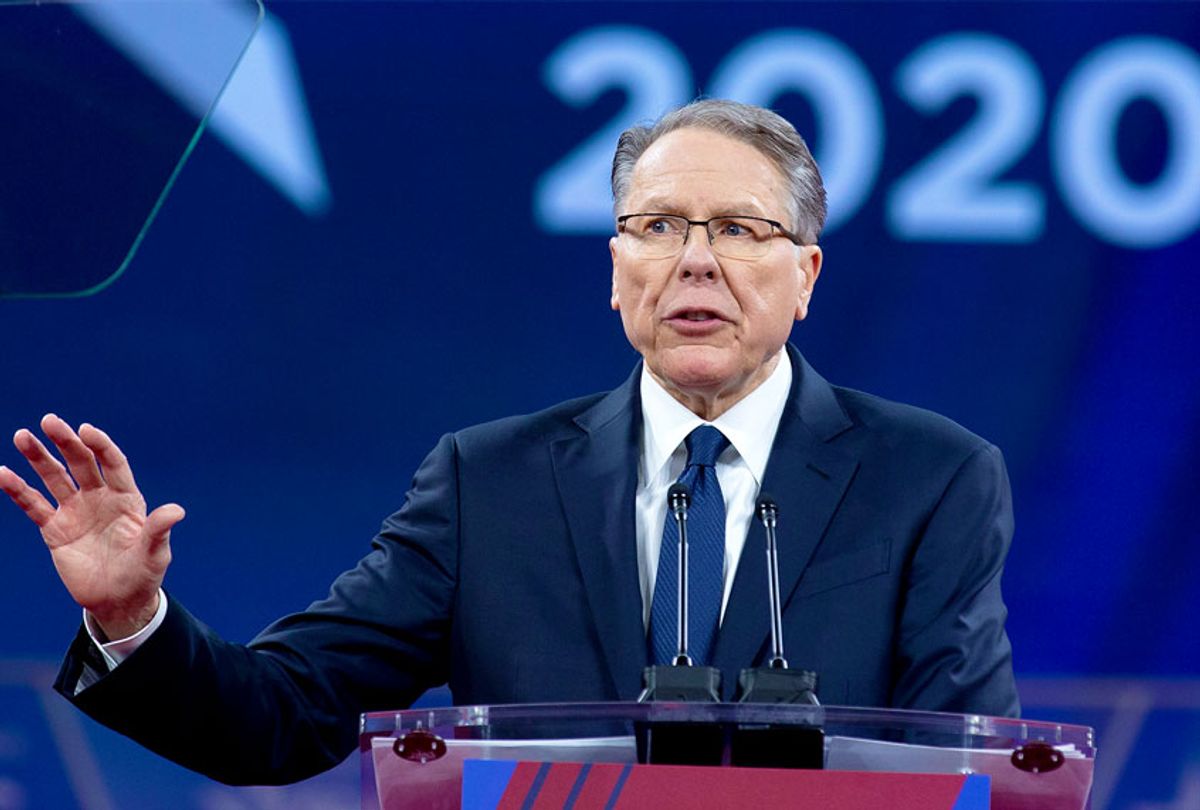 The National Rifle Association is planning to cut salaries by 20% across the board and lay off employees after the new coronavirus forced the gun rights group to scrap its planned events.

NRA chief Wayne LaPierre warned his board of directors on Monday that the organization "faces extraordinary challenges resulting from COVID-19" that will result in "the elimination of certain positions," according to an internal memo obtained by Newsweek. LaPierre said the group would also move to a four-day work schedule and cut salaries by 20% across the board "while maintaining current workloads."

Some positions would be eliminated on "either a temporary or, in some cases, permanent basis," the memo said, in order to "address immediate financial challenges and ... plan for long-term impacts to ensure the viability of our organization."

"Although we are unable to predict how long these pay-related adjustments will remain in effect, or the long-term financial impacts of COVID-19, they are intended to be temporary," LaPierre said, urging employees to "contact any germane state or federal agency to determine eligibility for any additional aid."

Asked if LaPierre would see his salary reduced, the organization's attorneys told the outlet that the "salary adjustments announced today apply to all levels of the organization."

LaPierre's salary increased by 57% in 2018, rising to $2.15 million per year, even though the group has faced a cash crunch for years. The longtime chief executive has also come under fire after leaked documents showed that he spent NRA money on expensive suits and lavish travel.

The NRA previously announced it would call off its annual April meeting in Nashville, due to the coronavirus epidemic.

"We were ultimately guided by our responsibility to help ensure the safety and well-being of our NRA members, guests, and surrounding community," the group said at the time.

Firearms have become a major issue during the pandemic with gun owners pushing back on local restrictions shuttering gun stores as nonessential businesses. Los Angeles officials relented and pulled back their orders to close gun shops, but the debate continues to play out in cities across the country.

The NRA has openly stoked fears about the coronavirus in a bid to drum up gun sales. But the pandemic has forced the group to scrap additional upcoming events, its law firm told Newsweek.

"Based on state or local restrictions and guidance from public health authorities, we have been forced to cancel all Friends of NRA banquets across the country, other planned events, special programs, gun shows, recruitment stations, and various other streams of expected income," the statement said, explaining that the restrictions have "caused a major disruption to our fundraising activities."

Most of the NRA's revenues come from fundraising and member dues. Although the group saw a large increase in member dues in 2018, the company has seen its legal fees skyrocket thanks to its ugly legal battle with its longtime public relations firm, Ackerman McQueen. The NRA is also investigation for possible self-dealing by New York State Attorney General Letitia James, and faces multiple lawsuits for its ill-fated attempt to offer gun owners Carry Guard insurance.

As a result, the NRA sank deep into debt, froze its pension plan for employees, and cut spending across the board.

The group cut funds for gun training, a key component of the group's mission. It also spent far less to support gun-friendly politicians after record-level spending in 2016 to support Donald Trump and other Republicans.

The group also cut basic office perks like free coffee and water coolers for its employees at its Virginia offices, The Trace reported.

Many executives and lower-level employees have left the group since 2018 and the organization was forced to quell a rebellion by former NRA President Oliver North, who led an attempted coup over concerns about LaPierre's spending.

Shannon Watts, the founder of Moms Demand Action for Gun Sense in America, argued that it wasn't the coronavirus but the "years of apparent self-dealing by NRA insiders and an agenda that is out of step with the American public" that led to the group's dwindling resources in a statement to NPR.

"I offer NRA leaders my thoughts and prayers," she said, "as our organization prepares to outspend and outwork them yet again this election season."