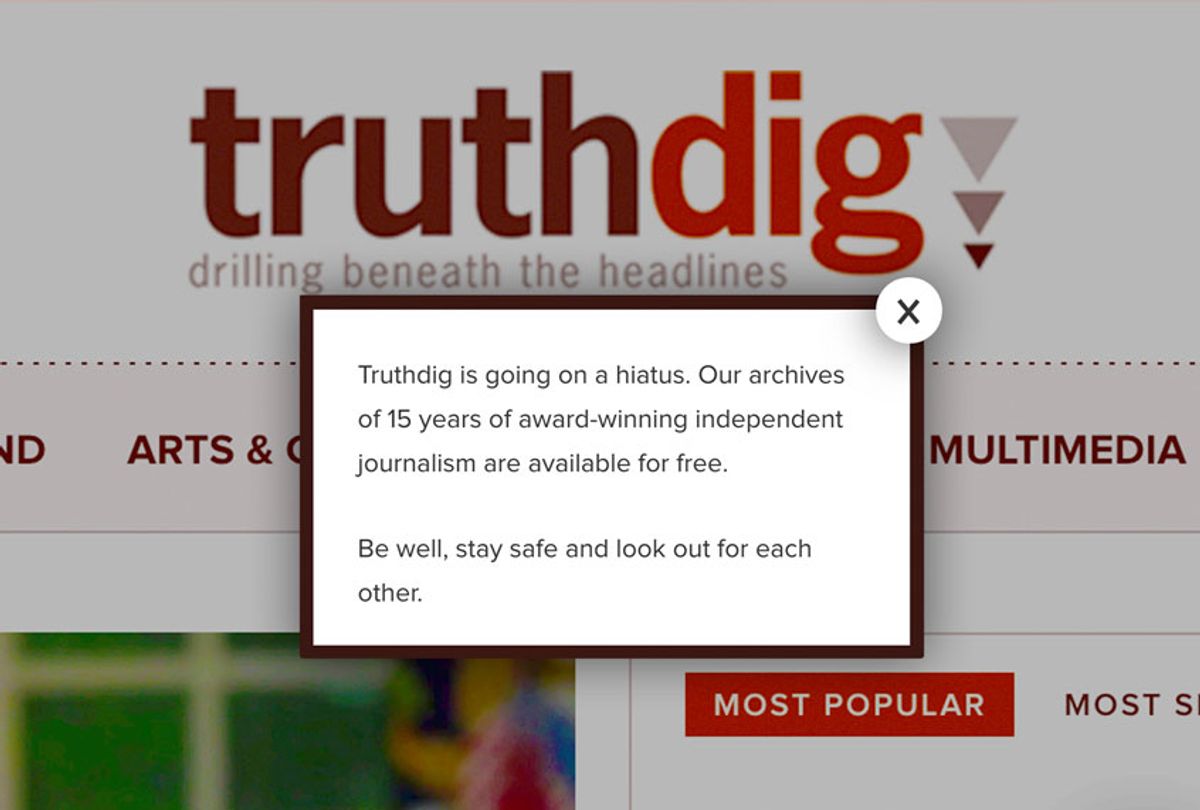 Editor's note: This story was updated on April 3rd to add a response from Truthdig publisher Zuade Kaufman.

Readers of the progressive news site Truthdig may have seen a cheerless message posted to the homepage this week. "Truthdig is going on a hiatus," the website states. "Our archives of 15 years of award-winning independent journalism are available for free. Be well, stay safe and look out for each other."

What a "hiatus" means is unclear, even to the news site's former employees. On Wednesday, letters of termination arrived in the inboxes of the site's small staff amid a work stoppage and global pandemic. [Editor's note: Salon occasionally reprints articles from Truthdig through an informal republishing agreement.]

Salon has spoken to former staffers who are disturbed by how the left-wing publication, which reported on labor and social justice issues, spontaneously laid off staff amid a strike which staffers said they hoped would have been short-lived once their modest demands were met. Among the demands were annual performance reviews, scheduled pay increases, four month's paid parental leave, and compensation for the company's health insurance plan. The National Labor Relations Board protects the right of workers to strike; employers are prohibited from firing employees for exercising this right. The employees weren't offered severance packages.

"My guess would be that it was what was planned anyway, just maybe put off a little while ago," Kasia Anderson, who most recently served as its executive editor, told Salon. "I feel as though maybe it appeared to [publisher] Zuade [Kaufman] that she was not going to have us come to her way of seeing things that [editor-in-chief] Robert [Scheer] needed to go. . . and it wasn't just that, but Bob in our view was the only thing standing between us and unfair treatment."

"Because of things that were happening, most of us felt that Zuade was clearly trying to take over editorial, which we know from both of them telling us openly was not in keeping with their agreement, so we were put in the middle of their dispute," Anderson continued.

Certainly, the dispute between Truthdig Publisher Zuade Kaufman and Editor-in-Chief Robert Scheer reached a tipping point earlier this month when the news site's staffers and contributors published a letter on the website, which was quickly taken down, announcing a work stoppage to protest unfair labor conditions. These issues were heightened by the dispute between Kaufman and Scheer.

Staffers, at the time, said the disagreement had reached a point where Kaufman was trying to force out Scheer, who is co-owner of the publication and oversees editorial. Scheer's status with the publication is currently unknown. Salon has reached out to both Kaufman and Scheer for comments. [Update: Kaufman sent a letter reply on April 3, which appears at the bottom of the article.]

"That dispute is approaching its nadir as we are concerned Ms. Kaufman is attempting to take control of Truthdig, thus effectively removing Mr. Scheer from the website he co-owns and co-founded," the staff wrote in the letter about their work stoppage, which was part of a separate statement posted on CounterPunch. "This is unacceptable to us."

But Anderson said there had long been issues at the publication, which started in 2005. Anderson started working at Truthdig in 2007, with two breaks over the last decade.

"From the start, there have been a series of staffers who have left Truthdig because of conflicts with Kaufman," Anderson told Salon. "I can think of at least nine off the top of my head right as I'm sitting here."

Anderson said that for years, staffers who had issues with the publication found it hard to resolve them for various reasons, including that many employees had to sign non-disclosure agreements.

"People weren't apt to speak up, but we spoke among each other," Anderson said.

Kaufman published a story on Truthdig titled "Open Letter from Truthdig's Publisher & CEO: Breaking My Silence" on March 17 alleging that Scheer "waged a campaign of misinformation." The staff on strike addressed many of the claims in another statement on CounterPunch.

In a third statement penned by the Truthdig staffers who were terminated, staff reiterated an unfortunate truth in media — namely, that the owners and managers of publications aren't always aligned with the publication's values.

"Truthdig's demise ultimately reflects a crisis of liberalism the website has been documenting for years—one in which social justice is only worth pursuing so long as it doesn't threaten the material interests of society's true power brokers," the statement asserted.

In an interview with Salon, Jacob Sugarman, who previously worked at Salon and most recently served as the managing editor of Truthdig, said what happened is representative of a systemic issue in journalism.

"What happened to Truthdig is appalling," Sugarman told Salon. "But I don't know, is it exponentially worse than The Young Turks not recognizing the labor union? It's certainly not an isolated case."

Indeed, the Truthdig "hiatus" arrives at a moment when ad-supported media is likely to face further economic hardships due to the pandemic-related recession. This week, news surfaced that BuzzFeed is implementing salary cuts due to the economic impact of the coronavirus. Nieman Labs recently speculated that the coronavirus could foretell the doom of local alt-weeklies across the country. Dropping paywalls to provide free information to the public about the pandemic is affecting many publications. The New York Times Co. said it is seeing a slowdown in advertising bookings due, according to a regulatory filing.

"If there are no local newspapers or online outlets left, who will be there to report on a crisis like this one and how it affects local communities?" Nick Charles, a freelance reporter and editor and spokesperson for the Save Journalism Project, said in a media statement. "When you see a doctor, nurse, sanitation worker, grocer, first responder and others on the frontlines of this pandemic featured in the news — a reporter interviewed them; an editor made sure it was accurate; a photojournalist took their picture."

"Newsrooms are an essential service and are showing their true value during this crisis," Charles said.

Since we created Truthdig LLC and launched its website in 2005, I have been Publisher and CEO, Robert Scheer has been Editor-in-Chief, and we have had shared authority over content on the site. The negotiations to dissolve Truthdig LLC preceded and have nothing whatsoever to do with the work stoppage. The underlying reason Truthdig LLC is being dissolved is solely irreconcilable differences between Bob and me, as co-founders and joint owners of the company, as laid out in the Complaint for Dissolution filed in Los Angeles Superior Court on March 25th.

As a progressive, I care deeply about workers' rights and have always believed in a fair and equitable workplace. While Truthdig LLC is a small company, we always sought to be generous with the compensation and benefits we provided staff and contributors, even though the company was never profitable. Indeed, I have never drawn any financial compensation from the company for myself.

I've always maintained an open-door policy with staff and contributors. The labor and employment issues raised in the work stoppage were never previously brought up to me, to our HR or, as far as I know, to Bob.

Amid the work stoppage, I told staff and contributors that I wholly support the democratic and free process of petitioning the National Labor Relations Board to conduct an election and explained to them the process for doing so. I also told them that while the business issues between Bob and me are confidential and an inappropriate subject for collective bargaining, determining what the majority wants through a secret-ballot vote is the fairest and most democratic way to resolve the other types of concerns raised by them.

Many of my relationships with staff and contributors felt familial. I've welcomed them into my home not just as colleagues but as friends. We celebrated many holidays and traveled together. I attended their weddings and cared for their children.

I co-founded Truthdig LLC and invested my time and finances because I believed in its mission as an independent news source. I brought my passion for progressive views, helped establish and nurture its vision, and actively ran it for the past 15 years. I am grateful for the many contributions of all the people who made the website a stellar platform in today's media world.