Why physicists still don’t know what reality is 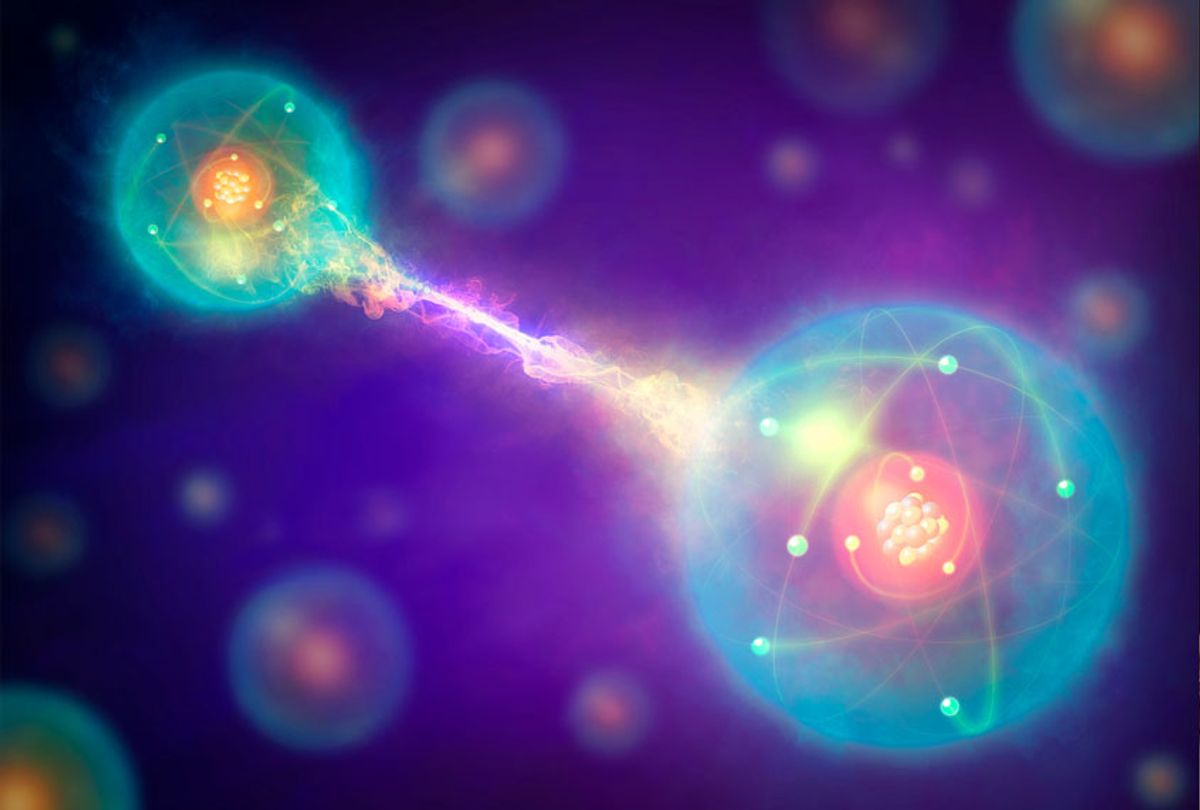 Conceptual artwork of a pair of entangled quantum particles or events (left and right) interacting at a distance. (Getty Images/MARK GARLICK/SCIENCE PHOTO LIBRARY)
--

"I don't demand that a theory correspond to reality because I don't know what it is. Reality is not a quality you can test with litmus paper. All I'm concerned with is that the theory should predict the results of measurements."—Stephen Hawking

I'm watching my old dog sleep in his chair. The tip of his tail curls under his snout. I look away and look back. Nothing has changed. I have every reason to believe that my observation of him has no effect on him whatsoever. What do sleeping dogs do when we look away? Exactly what they do when we look back.

But what do microscopic particles do when we're not watching them? That's another question entirely. We'll try, with trepidation, to apply our common sense. The problem is that common sense does not always work.

Suppose that your observation of particles merely reveals properties that the particles already had prior to measurement. No surprise there. Suppose, further, that the measurement of one particle has no effect on a distant particle. Also unsurprising — why would it? Suppose, too, that we have free will to choose how and when to measure the particles. Suppose, finally, that a particle deflected upward is not, in an unreachable parallel universe, deflected downward.

I'd like to give you an example of a constraint imposed by common sense. We require nothing more than simple logic, arithmetic, and a few minutes of concentration.

(We're about to do a simple but rigorous proof. Proofs were studiously excluded from early books about the philosophical implications of quantum mechanics. Fritjof Capra wrote, "I have suppressed all the mathematics," and Gary Zukav wrote that the proof is "indecipherable to a mathematician." In the decades since those words were written, physicists have developed many accessible—even enjoyable—proofs. Some of these are included in my recent book, "Quantum Entanglement," published by MIT Press.)

Suppose Alice sets her instrument to A, and Bob sets his instrument to B. They each measure a particle and record the result, +1 or -1. Then they multiply Alice's result by Bob's result, and the product of the multiplication must also be +1 or -1. Let's call this product AB, where A and B represent the individual results, +1 or -1. Suppose Alice and Bob repeat this process for many pairs of particles, and they record AB for each pair. Then they compute the average value of AB.

So, Alice and Bob have obtained four measured values: the averages of AB, AB', A'B, and A'B'. Now I'm going to write one equation, and I promise it's the only equation in this article. I'm going to define a quantity called S, as follows:

S doesn't have any obvious physical meaning; it's just something we can calculate. Since A, A', B, and B' can only be +1 or -1, the only possible values of S are +2 or -2. If you don't believe me, check out the math for yourself..

Since the only possible values of S are +2 and -2, surely the average value of S is between -2 and +2. This is a constraint mandated by common sense.

And yet nature disobeys this constraint! Experimentally, we find that the average value of S exceeds 2!

Where did we go wrong? All we used was basic logic and arithmetic. Did we just invalidate arithmetic? Do we need to inform elementary math teachers, so they stop spreading their lies? No, arithmetic isn't the problem here. But some false assumption, whatever it may be, leads to a constraint flagrantly disregarded by nature.

Let's look again at our equation: S = AB - AB' + A'B + A'B'. If A, A', B, and B' are physical properties that exist all along, independent of measurement, and each of these properties is represented by +1 or -1, then S must indeed be either +2 or -2, and the average of S must indeed be between -2 and +2. Since this constraint is disobeyed, we can only conclude that the particles' properties (A, A', B, and B') do not exist all along, independent of measurement.

What can this mean? Although Alice can measure either A or A', perhaps these two values never exist at the same time for a single particle. This could mean that the measured value was not merely unknown prior to measurement; it didn't even exist. Alternatively, perhaps Alice's decision to measure A (for example) was predetermined, so that A existed all along, whereas A' never existed. Yet another possibility is that A and A' depend on whether Bob measures B or B'. In this case, A is not a single value to plug into the equation for S, and we no longer find that S must be +2 or -2. At least one pillar of common sense must collapse to accommodate the experimental result that S exceeds 2.

We find in the laboratory, again and again, that nature disobeys our common sense. While disobeying our common sense, nature simultaneously adheres to a different set of formulas, those established by quantum mechanics.

This puts physicists in a pickle. Quantum mechanics accurately predicts the outcomes of measurements, but we don't know what to say about particles when we're not looking at them; all we know for sure is that our common sense gets it wrong. So, the interpretation of quantum mechanics remains a topic of speculation, controversy, equivocation, or indifference.

Some physicists argue that unobserved particles are simply none of our business; the business of physics is predicting observations. Let philosophers handle the unobserved particles. Physicists thus divest themselves of awkward questions and focus on what they do best. This viewpoint is admirably humble in its acknowledgment of the limitations of physics. Or is it just lazy?

Perhaps, instead, the error in our common sense is the belief in free will. Perhaps we are preprogrammed automatons, or the particles under observation diabolically influence our decisions. This possibility, though unpalatable and strange, is duly considered by physicists and philosophers.

As we continue to expand the frontiers of knowledge, the rigorous mystery of quantum entanglement remains stubbornly unsolved. I wonder if this is a salutary check on human hubris, a reminder of our place in a world we never made. Physics achieves the goal of medieval alchemy and astrology, to illuminate the invisible forces that govern the destinies of all things. But something always scurries away from the light, and the thirst for complete understanding is forever unquenched.

I struggle against the temptation to close with a joke about parallel universes. Perhaps in another universe, I succeed.