Charles Lindbergh's unapologetic bigotry: How he became the face of the America First Committee 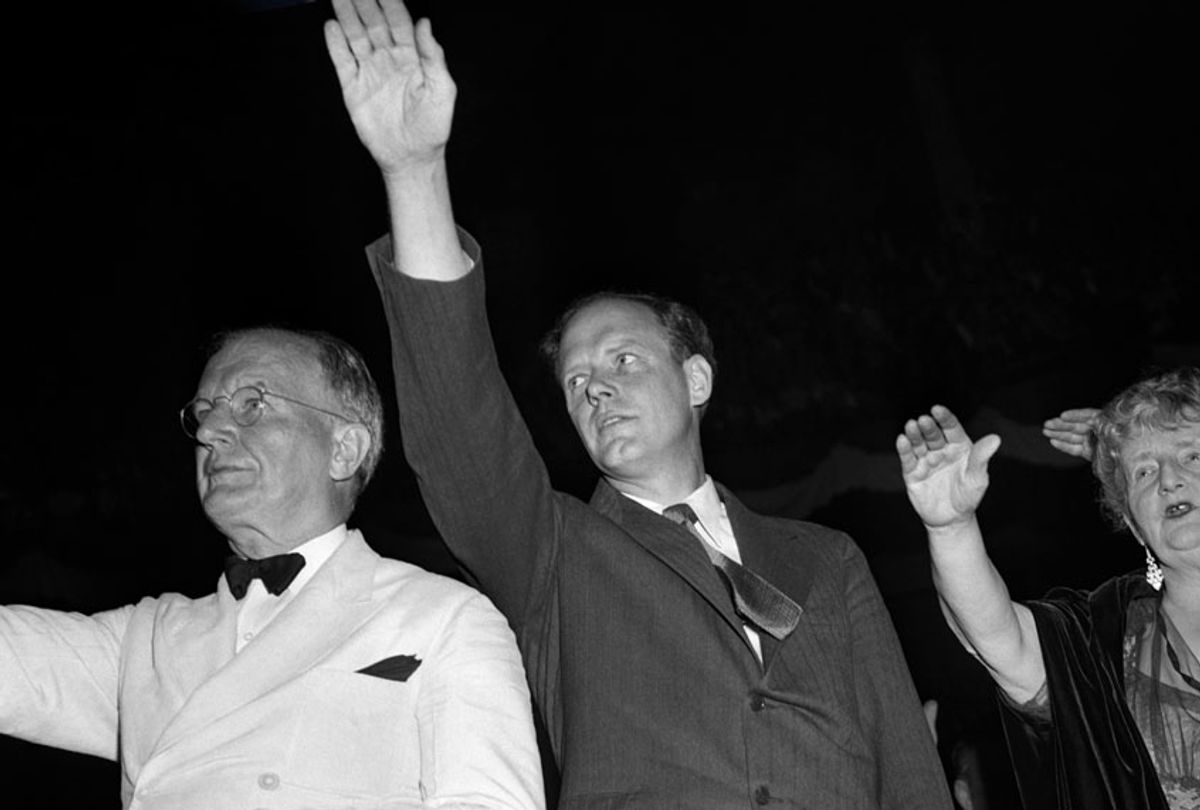 The streets around New York City's Madison Square Garden swarmed with America First rallygoers — 30,000 in all — shouting and stabbing the air with their signs. The staunchest Firsters had begun lining up before dawn in hopes of getting a front-row seat. Others had come straight from work on that Friday afternoon. Although everyone had a ticket, not everyone would get inside. The garden's cavernous arena wasn't big enough to hold all the movement's supporters. Those who didn't manage to get through the door would have to listen from the street on loudspeakers set up for that purpose. Tuned in to a local radio station, they blasted a selection of news and music meant to entertain, but the noise merely whipped the crowd into an even greater frenzy.

Flashbulbs popped as press photographers captured it all.

A couple of Firsters stepped assertively toward a reporter. Would the media cover the rally fairly this time? they wanted to know. Or would the newspapers be biased and inaccurate, as usual? Many rallygoers believed the press couldn't be trusted. Their hero, the face of America First and the man they'd come to hear speak, had told them so. "Contemptible," he'd called the press. "Dishonest parasites." In a recent speech he'd even told supporters that "dangerous elements" controlled the media, men who placed their own interests above America's. That's why he had to keep holding rallies, he'd explained. Someone had to tell it like it was. Someone had to speak the impolite truth about the foreigners who threatened the nation. It was time to build walls — "ramparts," he called them — to hold back the infiltration of "alien blood." It was time for America to close off its borders, isolate itself from the rest of the world, and focus solely on its own interests. It was the only way, he claimed, "to preserve our American way of life."

At 5:30 p.m., the garden's doors opened, and a crush of people began pushing and shoving, eager to get inside. As the enormous space filled, it grew hot and deafeningly loud. There was anger here, too, brewing and seething, waiting to be channeled toward some common enemy. It seemed to fill every seat, all the way up to the dim balconies.

At last, the man they'd come to see walked slowly toward the podium.

Pandemonium. It was as if every voice in the place fought to shout the loudest, the noise building and building until it was, as one rallygoer described it, "a deep-throated, unearthly, savage roar, chilling, frightening, sinister, and awesome."

"Give it to them!" shouted some in the crowd. "Give them the truth!"

"For six full minutes," a reporter would later recall, "he stood, smiling, as the mob leaped to its feet, waved flags, threw kisses, and frenziedly rendered the Nazi salute."

The speaker didn't try to tamp it down. He didn't repudiate those salutes. He just nodded and waited for it to end before leaning into the line of microphones to utter words that would be broadcast far beyond the arena to millions of Americans across the nation. "We are assembled here tonight because we believe in an independent destiny for America."

Sitting behind him onstage, the speaker's wife recognized the truth even if he did not. The crowd wasn't really listening to her husband's speech. It wasn't his words that moved them, but the man himself. The brand. The personality. The celebrity.

The mob chanted his name.

Fourteen years earlier, Charles Lindbergh had become an international sensation for his historic nonstop solo flight across the Atlantic. His fame intensified with the kidnapping and murder of his 20-month-old son, events so sensationally and exhaustively reported that they became known as the "Crime of the Century." Unlike other celebrities, however, Lindbergh didn't want notoriety. He wanted privacy. And so, in 1935, he fled with his family to Europe.

While there, he received an invitation to tour the German Luftwaffe. He inspected factories and flew the Junkers Ju 52, the centerpiece of Germany's new bomber force. Soon his respect for the aircraft was matched only by his awe of Nazi Germany's "organized vitality" and the way "science and technology [were] harnessed for the preservation of a superior race." Lindbergh began to think that the "strong central leadership of a Nazi state was the only hope for restoring a moral world order." No matter that it came at the cost of democratic institutions, individual liberties, and a free press. All that freedom, Lindbergh believed, just led to irresponsibility and moral decay. He began making plans to move his family to Berlin.

But as events in Europe escalated Germany's invasions of Austria, the Sudetenland, and Czechoslovakia — Lindbergh decided to return to the United States instead. The Second World War loomed, and he believed it would be disastrous for the white race. "Our bond with Europe is a bond of race and not of political ideology," claimed Lindbergh. "It is the European race we must preserve; political progress will follow. Racial strength is vital—politics a luxury. If the white race is ever . . . threatened, it may then be time for us to take our part in its protection, to fight side by side with the English, French, and Germans, but not with one against the other for our mutual destruction." Lindbergh was not a true isolationist. He looked forward to going to war against that "yellow danger," the Japanese. And he was eager, in the case of Europe, to "band together [with Nazi Germany] to preserve the most priceless possession, our inheritance of European blood."

He took to the radio waves to keep the United States from entering a war against Germany. All three networks broadcast his first speech, and millions of Americans tuned in. They were eager to hear his message . . . or more accurately, to hear him. Incredibly, Lindbergh hadn't spoken on the radio since his historic flight twelve years earlier. But now, having been gone from the United States for three years, he was bursting back onto the national scene. Was it any wonder the whole country wanted to hear him? Because of his celebrity status, a man whose expertise lay in airplanes, rather than history or government, was given a national platform on which to share his racist views.

By 1941, Lindbergh was the face of "America First," an anti-war organization begun a year earlier by a handful of Yale students. The group's goal was laudable. The problem was, it was the same as Hitler's — to keep the United States out of the war. As the organization grew in size and influence, it attracted right-wing extremists. Soon anti-Semites, nativists, and xenophobes swelled its ranks. They shouted, "Lindbergh! Lindbergh! Lindbergh!"

On September 11, 1941, he gave a speech to a crowd in Des Moines, Iowa. "The Jewish races . . . for reasons which are not American, wish to involve us in this war," he declared. "We cannot blame them for looking out for what they believe to be their own interests, but we must also look out for ours. We cannot allow the natural passions and prejudices of other peoples to lead our country to destruction."

Other people? Charles Lindbergh, the greatest hero of the day, a man whose utterances carried tremendous weight, had told all those in the hall and millions of others listening on the radio that Jewish people living in this country were not American, but other — a group living within the country with no allegiance to the nation.

Condemnation of the speech was swift. Moviegoers hissed whenever Lindbergh appeared on newsreels. Booksellers boycotted Anne Morrow Lindbergh's books. In Washington, D.C., an Alabama congressman waved a copy of "Mein Kampf" in front of his colleagues and declared, "It sounds like Charles Lindbergh," before flinging it to the floor in disgust. And Liberty Magazine, a publication advocating religious freedom, labeled Lindbergh "the most dangerous man in America." Adding that, before he came along, "anti-Semites were shoddy little crooks and fanatics. . . . But now all that is changed. . . . He, the famous one, has stood up in public and given brazen tongue to what obscure malcontents have only whispered." Citizens had had enough. They were no longer willing to tolerate Lindbergh's racist message.

Echoes of Lindbergh's fearmongering are still heard in the speeches of modern-day politicians. We see it in Eastern Europe, Brazil, the Philippines. President Trump, himself a celebrity who was given a national platform, has much in common with Lindbergh: leadership of a swath of enraged Americans, a deep distrust of most racial and ethnic minorities, a narrow definition of what it means to be an American, a fascination with dictators, and a belief that he is speaking the tough truth, political correctness be damned.

Lindbergh remained unapologetic for his speech. "It seems that almost anything can be discussed today in America except the Jewish problem," he wrote in his journal. Despite his later unstinting work for the World Wildlife Federation, as well as winning a Pulitzer Prize for his autobiography "The Spirit of St. Louis," his reputation never fully recovered. In the public's mind, his name would forever be linked with his darker impulses.

Will the same be said for our current celebrity politicians? Only time, and history, will tell.

Candace Fleming is the author of many books for children and young adults. Her latest, "The Rise and Fall of Charles Lindbergh," is out now from Random House. Visit her on the web at candacefleming.com.