Live from their homes: Late night hosts are back to show we're all in this together

With the rest of TV production on hold, late night hosts step up to help us adjust to a new normal 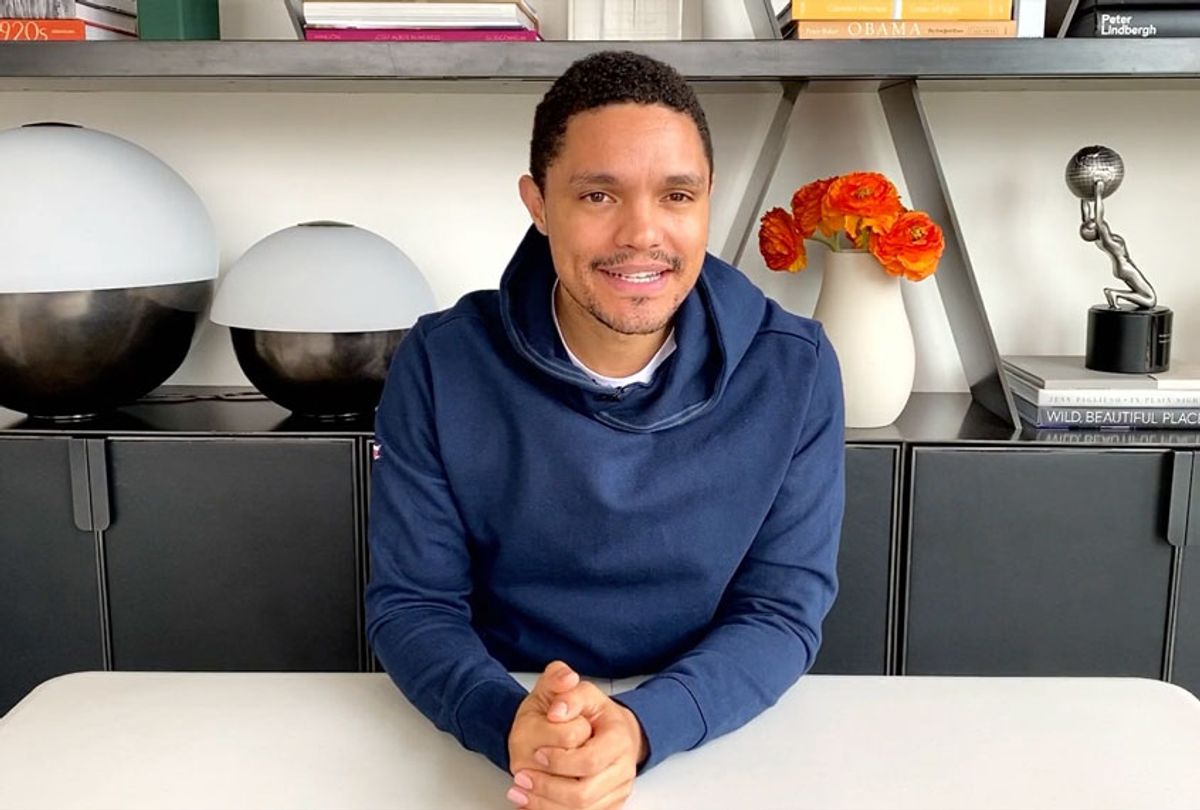 At first, late night TV hosts approached quarantine in the same spirit as any other gag. In observance of New York's social distancing order, Stephen Colbert filmed a thematically appropriate opening from the comfort of his bathtub that was tacked on to a March 13 rerun of CBS' "The Late Show."

In another clip he conducted a live interview from several feet away with comedian Bill Burr – easily done since the pair are neighbors in New York. Samantha Bee kept her fans sated by way of her online series "Beeing At Home with Samantha Bee," trading her polished set for a woodshed in the country.

And as of last week, "The Daily Show with Trevor Noah," "Full Frontal with Samantha Bee," and "The Tonight Show Starring Jimmy Fallon" had returned with new episodes produced from their respective homes. Fallon's "At Home" editions  began broadcasting last week from his home in East Hampton, and have made minor celebrities of his daughters. The girls burst in during interviews with impromptu and unplanned comic relief. His wife Nancy is on the camera, piping in from time to time with laughter or kindly correcting her husband.

Also last week, "The Daily Social Distancing Show with Trevor Noah" landed an insightful and informative interview with Dr. Anthony Fauci, the head of the Trump administration's coronavirus task force and director of National Institute of Allergy and Infectious Diseases. Fauci beamed in from Washington while Noah spoke to us from a desk in his apartment.

Sam Bee's first full quarantine episode aired on TBS on March 25, and featured a video chat interview with an ER surgeon tending to patients infected with COVID-19 . . . and a feature about Furries.

Next week they'll be officially joined by "The Late Show with Stephen Colbert," "Jimmy Kimmel Live!" "Last Week Tonight with John Oliver," and "Real Time with Bill Maher," all returning to production and to be broadcast from each host's respective homes, starting with a new episode of "Last Week Tonight" Sunday, March 29 at 11 p.m. on HBO. Maher returns to the cable channel Friday, April 3 at 10 p.m.

Conan O'Brien's TBS series "Conan" also resumes on Monday, March 30 with shows to be shot remotely using an iPhone. Showtime's "Desus and Mero" resumes as well, with hosts Desus Nice and The Kid Mero also coming to us their respective homes.

With the economy having ground to a halt, the resumption of these bedtime broadcast staples is a way we might resume some version of life as we used to know it. By returning remotely, and with intentionally bootstrapped produced values, these series also place their version of a stamp on the new normal of virtual connection. Each show's staff continues to write and produce their series remotely, joining most of the country in the new age of working from where we're sheltering. They're all hunkered down and making the best of it right alongside their viewers.

Late night talk shows have long served as the unofficial political and social health barometers for the nation. In crises, they become a form of medicine, part of entertainment's first line of defense dedicated to helping the audience to make sense of the impossible, to cope, to give them a sense that everything will indeed be OK.

But not since 9/11 have the likes of "The Daily Show," "The Tonight Show," "The Late Show" and other topical comedy stalwarts been forced to contend with a crisis on par with this pandemic. Scratch that. They've never had to deal with something like this.

The days that followed September 11, 2001 were frightening and tense, and many of these programs were physically unable to resume production. When they could, their writers were faced with unknown territory beyond the horror of the blank page – what jokes are appropriate? When is it OK to laugh? David Letterman, then host of CBS's "The Late Show," cemented his elder statesman of comedy status by being the first to return to the air, mourning with the nation but also shoring our resolve. And, in that same broadcast, coaxing back the laughter. The studio audience's relaxed compliance with this sober duty helped. If the folks in the studio could laugh, so could the rest of us who were watching.

In contrast, the very nature of COVID-19 upends everything these shows represent socially and materially. The hallmark of surviving this pandemic is separation, and that means no live laughter from people rubbing elbows in theater seats. No celebrities entering with a smile for the cameras and a hug or a hearty handshake for the host. No sitting together for chats, no leaning in close to share embarrassing stories. Even the in-house bands – The Roots for "The Tonight Show," The 8G Band for "Late Night with Seth Meyers,"  Jon Batiste and Stay Human for Colbert's "Late Show" – are sheltered in their own houses.

All of this is part of the dawning realization that for the foreseeable future, technology-enabled connections are the new normal. Enforced social distancing has forced us to exist, to touch one another and relate to each other in a virtual space. And it's not surprising that each of these hosts, most of whom grew up at the beginning of the tech evolution, would forge ahead with their shows while embracing all of the imperfections that come with creating entertainment at home. With the rest of the industry on pause, late night staffs, those veterans of brisk joke-writing and speedy episode turnarounds, were destined to become entertainment TV's version of first responders.

Funnily enough, while the lack of a studio audience calls a heightened attention to the jokes that work and the duds, that silence also makes hosts and the various co-stars with whom they share the show seem more genuine and approachable.

Audiences already got an impression of what an audience-free topical comedy talk show could be like, when Bee taped "Full Frontal" in studio without her usual live audience, a model John Oliver followed for a skeleton crew-staffed March 16 edition of HBO's "Last Week Tonight." The jokes still hit but . . . they hit differently.

Moving the shows home relaxes everything, much in the same way we accept the imperfections in a home cooked meal at the friend's house. Everybody accepts we're all doing the best we can given the tools we have and these extraordinarily frightening circumstances. We're all housebound, yes, but for many people, home equal comfort and safety.

And this truth places these hosts and late shows in a special category, since we choose the ones we like most based on what they do for us during the final hours of the day – any day, good, bad or frightening.

This somehow makes our relationship with them more intimate than that we have with other series, since we tend to spend time with these people when we are physically at our most vulnerable – in bed, in pajamas, nodding off to sleep.

But this also inadvertently levels the playing field. There are no sparkling stages or tailored suits in these shows. Fallon is just a guy with his adorable family, more relaxed and real, kindly and genuinely approachable, with no need to impress and whose only goal is to soothe. His fans would say he's always been like this, the rancor of recent times muted that charm.

Now, as Americans are seeking a figure of comfort and reassurance, he's kind of perfect. The same holds true for Kimmel, whose at home persona elevates his cool and slightly acerbic dad persona to new heights. Bee remains sharp, empathetic and aggravated, only now she's drawing upon the visuals of the woods, giving her comedy an end-of-days vibe that nevertheless augments her stage persona.

Noah, meanwhile, remains the fun-loving friend who always has a witty punchline holstered and ready, backed up with a bright smile. But he's also honest about the frustration and confusion created by misinformation and bizarre developments of any particular day. He connects with his fans in the same way he always does, which isn't usual for a comedian who came up in the viral video age.

Anyway, in terms of his background and setup, the socially-distanced "Daily Show" feels closer to the studio production than, say, Seth Meyers "Late Night From . . . My Hallway," his online contribution to the quarantined late night subgenre. The acoustics in his clips aren't optimal, the lighting is unpredictable, but Meyers is a pro – he acknowledges the subpar situation and keeps it moving.

"Shout-out to YouTubers who have been doing this for a long time and making us pros look like real dopes this week," he said in a recent segment. "I tip my cap!"

Meyers is still among the best of the best at what he does and watchable in any context, and his online-only "at home" segments have only further cemented his fanbase's adoration for him. And they – we – can't wait to have him back with full new episodes coming to us live, on tape, in our remotely connected age. As he put it during a segment "Late night's in quarantine, but we're still processing everything."

We need all the help we can get with that, from wherever we can get it, be it a bathroom, a hallway or a couch. We're all in this "at home" universe together – hopefully these late shows will help us make the best of it.