Yes, his numbers have ticked upward for now. But compared to every other major world leader, he's still a clown 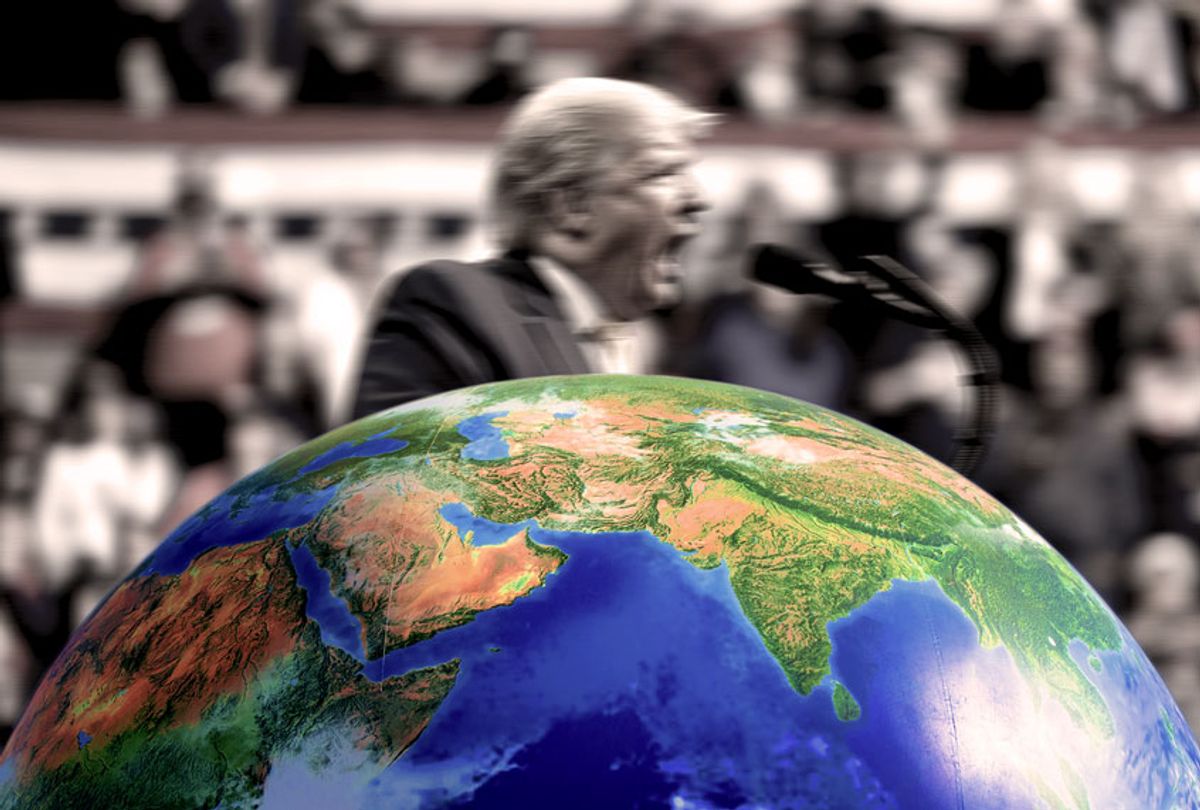 Here's an example of what President Trump thought was important to share with his millions of Twitter followers this past weekend as we watched the nation's coronavirus numbers climb into the tens of thousands:

Unfortunately, that wasn't the end of it. Trump's friends at OAN brought up both his Nielsen ratings and his approval ratings at the White House coronavirus campaign rally on Sunday as well. Twice:

At least Trump agreed to extend the federal social distancing guidelines through the end of April, ruefully conceding that his stated goal of having millions of Americans crowded into churches on Easter Sunday was "aspirational." He said "people" had all told him he should open the nation for business right away ("They said just ride it, ride it like a cowboy, ride that sucker all the way through"), but when he was told on Sunday that more than 2.2 million people could die he decided not to. He said that if we keep the death toll down to 100,000 to 200,000 it will show that his team has done "a very good job."

Last month Trump was assuring us that the U.S. only had 15 cases and they would be down to zero in no time — and now pretty much any number below 2.2 million is proof that his genius leadership saved hundreds of thousands of lives.

He also insulted reporters and claimed the hospitals don't really need all those masks, insinuating several times that he thinks doctors and nurses are either hoarding them or selling them on the black market. These rallies have to have some good old-fashioned Trumpian red meat, after all. Just because we're dealing with an unprecedented global crisis doesn't mean his followers shouldn't be entertained.

His "ratings" are understandable. He schedules them for the usual news hour on the East Coast, most people are off work and sitting at home, and everyone's anxious for news. But he shouldn't be too sure that everyone is tuning in because they think he's so terrific. Plenty of people are watching his incoherent antics with shock and dismay.

These are not press conferences and they convey very little useful information. He is performing a bizarre ritual, modeled on his campaign rallies but with the specter of mass death hanging over them. He reads from written remarks which contain almost normal-sounding talking points, randomly punctuated by weird, mind-boggling digressions, lies and conspiracy theories.

The subsequent Q&A session features a setpiece in which the president humiliates one or more reporters who ask him a question he doesn't want to answer. Lately, they've featured an array of comely OAN personalities asking him a fawning question that allows him to attack the media and brag about himself. An expert or official will take the podium from time to time and deliver some data points, but those are minor players in the president's daily drama.

After he's finished he leaves the podium to his majordomo, Mike Pence, to proudly hold up his little poster with the CDC guidelines and deliver his patented lugubrious sermon on the greatness of the president and the American people. And that's the end of it.

Despite Trump's depraved obsession with TV ratings even at a time like this, those aren't the ratings that matter. Over the past few days some new polls have been released that confirm Trump's approval ratings are ticking up. They aren't quite as healthy as some of his fellow global leaders, however. Morning Consult gathered polling from around the world:

Mexico's president, Andrés Manuel López Obrador, already had a 60 percent approval rating. Trump, Brazil's Jair Bolsonaro, and Japanese Prime Minister Shinzo Abe either dropped a little or showed tepid improvement of just a few points. In the poll they cite, Trump was at 44% approval and 49% disapproval. Nate Silver's FiveThirtyEight has him at very similar numbers in its poll of polls, at 45.8% approval to 49.8% disapproval. That's very good by Trump standards, but only because his ratings have been mired in the low 40s for his entire term. Improvement of two or three points amid a major crisis isn't much.

There have been three presidential campaign polls in the last week or so, all showing presumptive Democratic nominee Joe Biden holding a lead, although the numbers are all over the place. A Fox News survey conducted last week had Biden well ahead of Trump, 49% to 40%, while the Monmouth poll from last weekend had Biden leading 48-45. An ABC News/Washington Post poll shows a statistical tie, with Biden leading by 49% to 47%.

Bear in mind that these numbers are all irrelevant at this stage. I went back and looked at polling in the 2012 election at exactly this stage in the race, and presumptive GOP nominee Mitt Romney was leading President Obama by a couple of points. Obama won that race in November, 52-47. That's making no prediction about what happens this year. The current bizarre, shelter-in-place campaign couldn't be more different. I just bring it up to show that polling in April isn't a good indicator of November results even in the best of times. And we are definitely not in the best of times.

That ABC News/Washington Post poll flagged what seemed to be a harbinger of doom for the Democrats, pointing out that while enthusiasm for Trump was sky-high among his supporters, only 24% of Biden voters were very enthusiastic about him. That certainly doesn't sound good.

But this election is really all about Trump, for better or worse, and the Fox News poll looked at the same issue with a slightly different slant. A majority of respondents said they were extremely interested in the election, and among them Biden was favored over Trump 52-43, indicating that while Democrats may not be particularly excited about their candidate they are highly motivated to vote against the other guy. That's "negative partisanship" at work, which Trump has turned into a governing principle but may also be what seals his fate in November.

All those foreign leaders are seeing a big bump in their approval ratings because they are rising to the occasion and handling this emergency like responsible adults. Some are undoubtedly doing the job better than others, but none of them (with the possible exception of Trump's good buddy Bolsonaro) is using it as an excuse to get in front of the cameras, air their political grievances and attack the press.

Trump is putting on a macabre show every day to keep himself front and center. But he can't escape the fact that his management of the crisis has been disastrous and his public leadership has been appalling. Every day that's on display for the whole world to see, while on the side of the screen the body count ticks up and up and up.