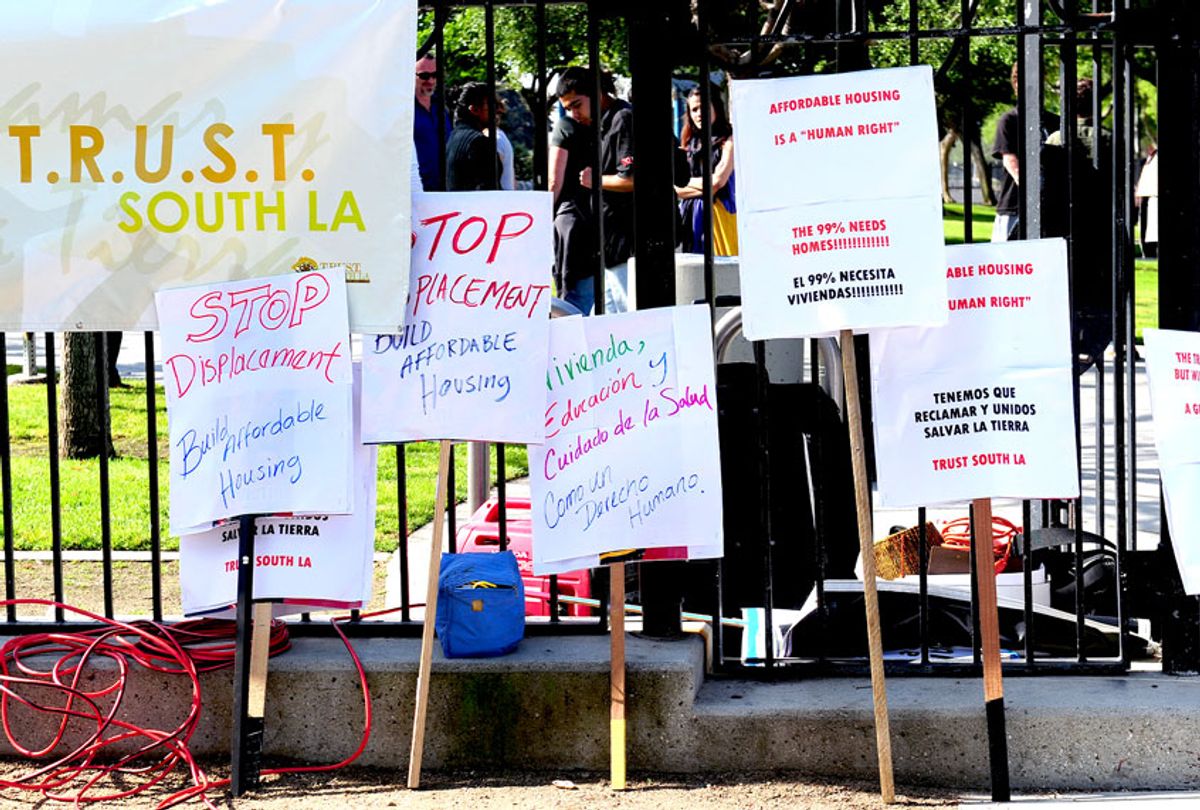 An estimated one-third of American households live in a rental unit. Meanwhile, the coronavirus pandemic has wreaked havoc on many Americans' ability to pay rent, leaving an estimated three million workers jobless and millions more with hours cut back. The food-or-shelter predicament is leading an unknown number of renters to contemplate the once-unthinkable — a spontaneous rent strike, just as April rent is due.

"People who depend on their jobs for income don't have that coming in right now, millions and millions of people don't have that coming in right now," Lupe Arreola, the executive director of tenant advocacy group Tenants Together, told Salon. She continued: "We expect that millions of people who have been out of work for at least the last couple of weeks [or] even the last month — due to cut hours of shelter-in-place, or taking care of family and children — come April 1st, they won't be able to pay their rent."

The sudden, nationwide economic crisis is creating renter solidarity out of sheer circumstance, Arreola said. "I think a lot of the calls for rent strikes are because that is the reality for many people; not being able to pay rent right now should not put you at risk for putting you on the street during a pandemic."

A search on Instagram or Twitter of the hashtags #rentstrike and #rentstrike2020 reveals hundreds of photos of signs draped out of windows showing solidarity for the rent strike movement. There are multiple reports of people organizing rent strikes in New York City apartments. Many renters are withholding rent in a less organized matter: according to Gothamist, many who have lost their jobs reported feeling "dread" about paying rent this month, and feel they have no choice but to withhold it. The Guardian reported renters organizing in the Boyle Heights neighborhood of Los Angeles. Others are organizing rent strikes in Chicago and Portland, Oregon, too, where the phrase "No Work, No Rent" was graffitied around the city.

"The turning point for me was when I tried to collect unemployment from the Illinois website," a 23-year-old told Vice. "It crashed before I could even create a username. So we felt like we were kind of out of options."

A 60-day delay in foreclosures is part of the $2 trillion relief package enacted by Congress, but such relief measures apply only to homeowners with federally backed mortgage loans. For property owners of multifamily units, that delay can be up to 90 days, a period in which landlords will not be able to evict tenants or charge late fees. But again, that only applies to those who have taken out federally backed mortgage loans. Many rental properties are owned by small businesses or individuals. The National Multifamily Housing Council is advocating for additional housing resources for residents and apartment firms.

An analysis by USA Today found that at least 34 states have issued more extensive moratoriums on evictions. Several cities, including New York, San Francisco, St. Louis and Boston have banned evictions for the time being, but housing advocates are demanding that rent payments be waived, that eviction moratoriums be extended, and payment plans be worked out for tenants who are affected. In states like California, tenant advocates have criticized Governor Gavin Newsom's executive order because they drag out the eviction process. In California, renters will also ultimately have to pay back rent in full.

Americans are expected to receive a $1,200 check or direct deposit, in addition to expanded unemployment benefits for those who have lost their jobs. But in states like California where many residents are rent burdened, meaning more than 30 percent of their income goes to rent, this income might not even cover rent. Tenants Together has a hotline for California tenants seeking advice on their rights. Arreola said the organization is receiving at least double their normal call volume.

"Regularly, our calls are mostly about evictions and rent increase issues . . . . right now the vast majority of calls we are getting are from people who are scared that they will be thrown out to the streets because they're not able to pay their April rent, or May rent," Arreola said. She added: "We don't know how long this pandemic is going to last, and how long it will take for people to get back on their feet economically."