No, the money won't be dropped from a helicopter — and your $1,200 check may not even come in the mail. Here's why 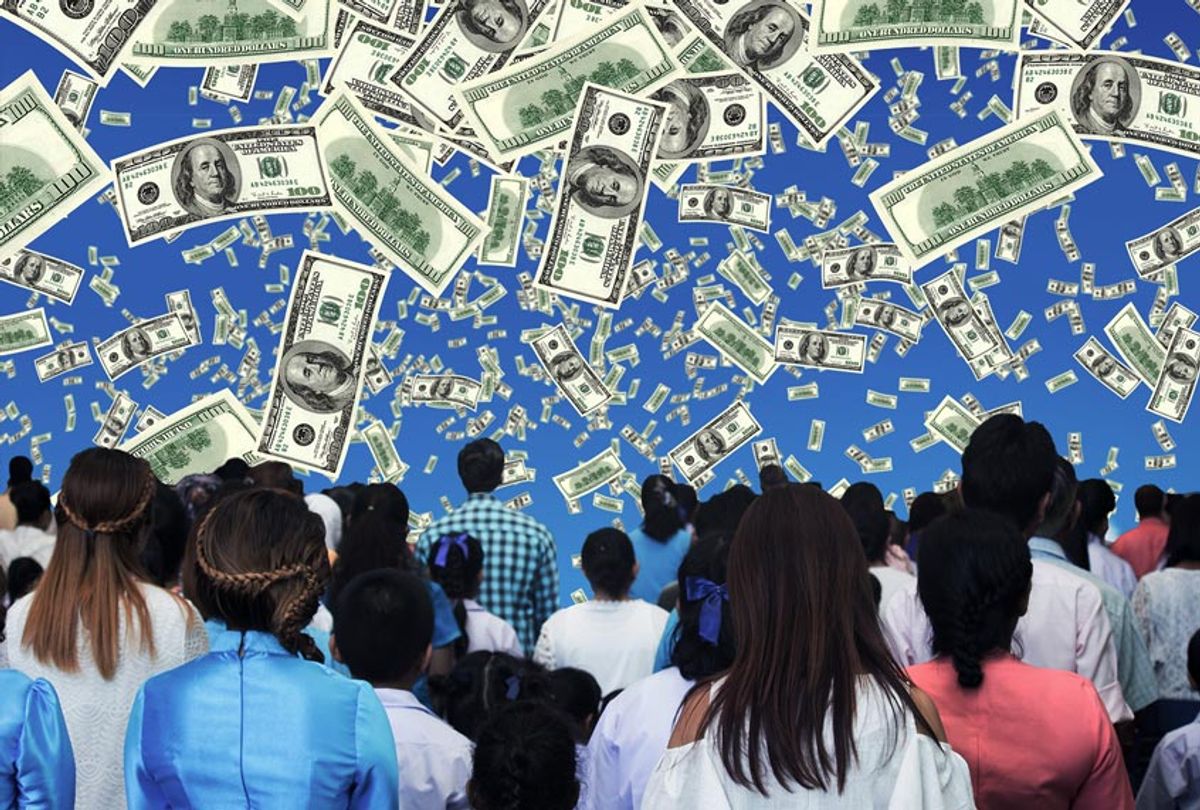 Cash raining down on the masses (Getty Images/Salon)
--

The $2 trillion coronavirus stimulus package, which the Senate is expected to pass on Wednesday, will be the largest economic relief measure in American history — and will purportedly provide tangible benefits to virtually every American citizen.

But how so? The idea of the government doling out "free" money to its citizens is anathema to many Americans, who have been trained to believe that they are undeserving of even the most basic social safety nets that are considered normal in most developed countries. Hence, Americans are apt to be curious and/or skeptical about the notion of government checks.

Here's how this distribution of funds to individual citizens will actually work. Those with a valid social security number who filed taxes in the past two years will likely get money. The government bases its knowledge of your income on your tax return, although different sources report different things. CNBC reporters say that one's income is based off most recently-filed tax returns; that means that if you already filed your 2019 tax return, they would base income data on that. If you filed last year (for the 2018 fiscal year), but haven't filed for 2019 yet, the income data would be based on that. Yet finance reporters at The Motley Fool believe that only 2018 incomes as reported on one's tax returns will be considered.

There are conditions attached to the business relief measures. Small businesses will only receive their loans if they keep their employees on payroll, with loans extending through June 30 only being available for businesses that do not lay off workers. Though many large corporations will benefit from the relief package, businesses owned by senior government officials — including President Donald Trump's family — will not qualify.

In addition, the stimulus will extend unemployment benefits by 13 weeks and expand the criteria for eligibility. Gig workers, freelancers and furloughed employees will now qualify for unemployment insurance. The maximum unemployment benefit that individuals workers can receive will be increased by $600 per week.

Senate Democrats fought hard with Republican counterparts to make the stimulus legislation as progressive as possible, including asking for  $1,500 cash payments (rather than $1,200), increasing aid to hospitals, and being more generous with unemployment benefits. Even so, Republicans are traditionally opposed to social welfare programs such as the stimulus legislation, and their anticipated support for the measure marks a deviation from right-wing economic orthodoxy.

"Part of the reason Trump and so many other Republicans are supporting such an expansive stimulus package: As the party with more power in Washington, they stand to take more of the blame if the response to the public health and economic crisis is seen by the public as lacking," Kyle Kondik, managing editor of Sabato's Crystal Ball, told Salon by email.

As Senate Minority Leader Chuck Schumer, D-N.Y., tweeted on Wednesday, "We fought for more than more than $150B for our healthcare system. That includes a new $100B fund that is available to all healthcare providers on the frontlines of the crisis. Tests, ventilators, beds, protective equipment, medicines, lost revenues, staffing, and more."

Senate Majority Leader Mitch McConnell, R-Ky., tweeted on Wednesday that "At last, we have a deal. After days of intense discussions, the Senate has reached a bipartisan agreement on a historic relief package for this pandemic. We're going to pass this legislation later today."