"Use this time at home to get back in the 'Word,' read our Bibles and spend time with our families" 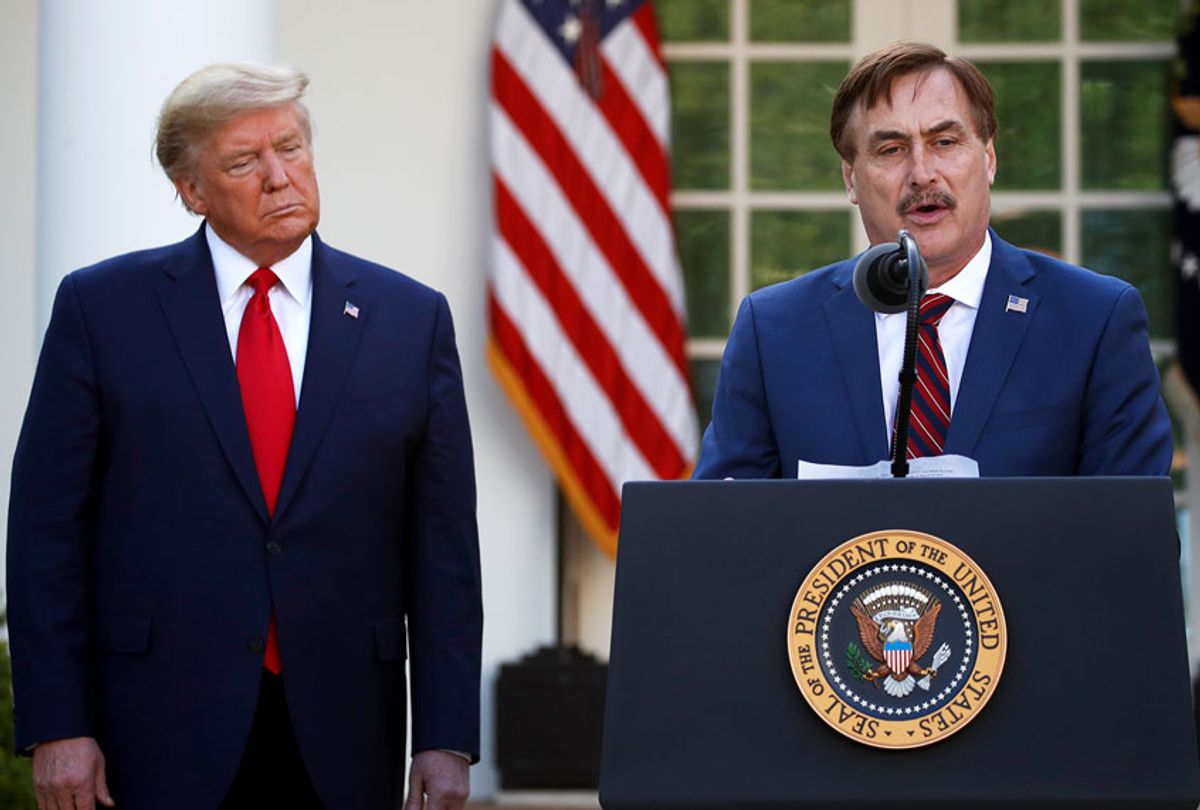 My Pillow CEO Mike Lindell speaks as President Donald Trump listens during a briefing about the coronavirus in the Rose Garden of the White House, Monday, March 30, 2020, in Washington. (AP Photo/Alex Brandon)
--

My Pillow CEO Mike Lindell claimed to the American people that God wanted President Donald Trump to win the 2016 election after he was handed the podium at Monday's White House press conference on the coronavirus pandemic.

"I wrote something off the cuff, if I can read this," Lindell said Monday at the White House. "God gave us grace on Nov. 8, 2016, to change the course we were on. God had been taken out of our schools and lives. A nation had turned its back on God, and I encourage you to use this time at home to get back in the 'Word,' read our Bibles and spend time with our families."

He added, "Our president gave us so much hope, where just a few short months ago, we had the best economy, the lowest unemployment, wages going up . . . It was amazing."

Lindell concluded that America would get through the pandemic "with our great president, vice president and this administration, and all the great people in this country praying daily."

Trump thanked Lindell for his comments as he in turn claimed that he "did not know he was going to do that. But he's a friend of mine, and I do appreciate it."

Lindell was not alone among CEOs who took to the White House podium to tout their companies while either directly or implicitly praising the president at the same time. Lindell told a reporter during the briefing that his company planned to manufacture 50,000 cotton face masks a day by Friday. A defense contractor and an underwear manufacturing executive both shared that their companies would produce necessary medical equipment because Trump had asked them to do so.

Trump's relationship with Lindell is unique in at least one respect, however. Associates close to the pillow executive told Politico that the president has urged him to run for governor of Minnesota in 2022. He announced last month that he had been appointed chair of Trump's re-election campaign in Minnesota.

Lindell also appeared in February at a Conservative Political Action Committee (CPAC) event, saying that he knew after meeting with Trump that he was "going to be the greatest president ever." He has donated more than $200,000 to Trump's campaigns and associated committees.

If he were to run and win against incumbent incumbent Gov. Tim Walz, a Democrat, Lindell would join former Reform Party Gov. Jesse Ventura and former Democratic Sen. Al Franken as a former celebrity elected to higher office from Minnesota.

The CEO claimed that he decided to lay off 150 workers at a facility in Shakopee, Minn., in order to launch an "online store for entrepreneurs and inventors to sell their products." He did so after boasting about how Trump's policies had helped create a prosperous economy.

He later added, "I value each and every one of my employees so this is a difficult decision, however this is what is best right now for the future of MyPillow and to prepare for the launch of MyStore.com. Once MyStore is up and running, we anticipate we will be hiring."