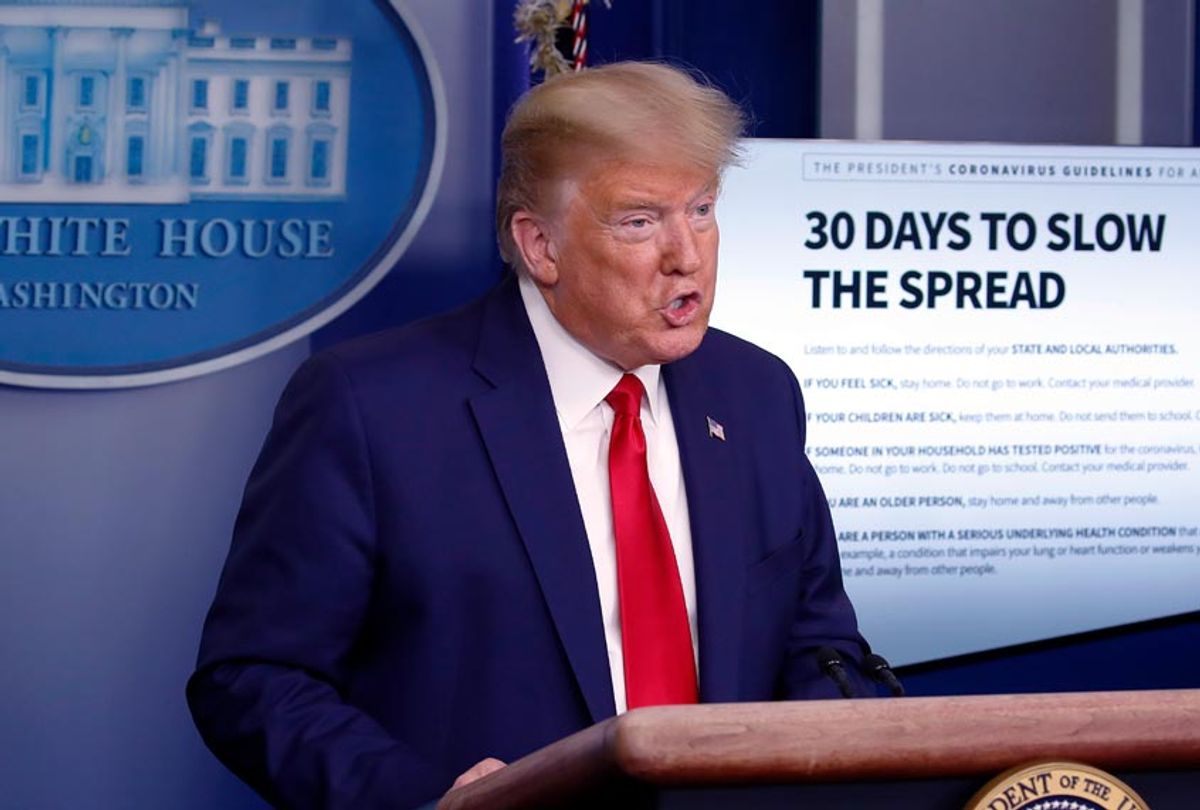 On Tuesday, Donald Trump held a press conference that sounded slightly less like the P.T. Barnum-style daily events whose ratings he's been bragging about ever since he took them over from Vice President Mike Pence, who Trump feared was hogging the spotlight. He managed to admit the death toll is likely to be a six-digit number and, after spending months minimizing the new coronavirus, even admitted this is worse than the flu. Naturally, the forever-gulllible press immediately began praise Trump as if he were a two-year-old who went poo-poo in the potty like a big boy.

"This is an absolutely new message and new tone from Trump," gushed Jake Sherman of Politico on Twitter.

Slightly less gushy but still naive, from Eric Lipton of the New York Times: "Trump sounding different today. Scale of death appears to have changed his tone, at least."

Even after admitting that "people might say, well, you know, I can't ever trust him. He's a phony and so on," Jim Acosta of CNN insisted, "I've never seen President Trump like this" and "I think he gets it."

It's hard not to feel some sympathy for these folks, even though they're marks walking into a trap laid by a con artist who has been grifting since he first went poo-poo in the potty. It's not easy to accept the reality of our nightmarish situation. A pandemic is ripping across the country and our president, a man who meets every criterion on the sociopath checklist, does not care how many people die or face financial ruin, so long as he can win re-election. Of course it's alluring to believe that there is a human being capable of compassion or care somewhere inside that ghoulish exterior, and that he will rise to this occasion.

This is exactly the kind of thing abuse victims go through with their abusers, often for years: Believing that this time he has changed, he won't hit you again, those flowers he bought when he apologized are so nice, and so on. But it's important to come to grips with the fact that he will always hit you again.

It's the job of journalists not to fall for this act, or at least it should be. Trump doesn't care if hundreds of thousands of people die. He is not capable of caring. This act is designed to hoodwink the public into looking away from the facts, which are that things got so bad because Trump spent months refusing to do anything to stop this virus from spreading and is now forcing the public to clean up his mess by giving up their jobs to stay at home.

Just as important, there's absolutely no chance Trump has changed. We've been down this road countless times: He acts somber for a minute, gets gushy praise from the press that has lowered the bar for "presidential" conduct below the basement, and then snaps right back to his usual vindictive, petty, sociopathic self. We've been down this road multiple times with just the coronavirus crisis, where Trump has had moments of seeming to take it seriously, before regressing into claims that he'll "reopen" the country by Easter Sunday.

Indeed, if one looks away from Trump's play-acting the sober-minded leader on TV for a minute, what becomes clear is that he hasn't actually shifted gears at all. He's still trying to avoid blame for how bad this situation has gotten, claiming that he was distracted by impeachment. (Which was also his fault, and could have been avoided if he had stopped doing crimes.) (Also, he wasn't really distracted by it.) Just this week, Trump has floated conspiracy theories about hospital staff stealing supplies in order to deflect blame for the shortfalls.

The conspiracy theory-obsessed right, which is where Trump's heart and mind lives, has not given up the ghost at all, and continues to push the idea that the coronavirus pandemic is a hoax. Former Fox News radio host Todd Starnes wrote a column suggesting "there has been no concrete proof" that hospitals in New York City are overwhelmed. He claimed he had "personally visited two hospitals in Brooklyn and did not see any unusual traffic."

(Considering that hospitals have banned anyone who isn't there for medical care from coming inside, it's unclear how Starnes conducted these visits.)

Subsequently, there has been a rush of conservatives on social media posting photos of empty hospital parking lots (which isn't surprising, due to visitor bans) or video footage of quiet entrances which supposedly prove that nothing much must be going on inside.

Rush Limbaugh, who Trump honored with the Medal of Freedom in January — one of our president's most in-your-face trolling operations — is digging into the "hoax" narrative as well, declaring that since Palm Beach has only had 57 hospitalizations and 11 deaths (so far), this crisis is being "politicized" and exaggerated to damage Trump.

The Trumpian stars Diamond and Silk are shamelessly declaring that the death count is being faked in order to hurt Trump. Pro-Trump pastors continue to demand the "right" to hold massive church services in the middle of the pandemic. The Federalist continues to publish article after article declaring that this public health crisis is being overblown by anti-American liberals.

To get a good sense of where Trump World is, look at how the Trumpiest governors are behaving. Florida Gov. Ron DeSantis is still refusing a statewide shutdown — because Trump hasn't told him to. Georgia, Mississippi, Missouri, Arkansas and Alabama have similarly resisted shutting down businesses or putting shelter-in-place orders on the public. Trump may have abruptly started making sad faces on camera, but he's not doing anything substantial to get these governors to protect their own people.

Trump is a con artist, so he gets a kick out of occasionally pretending to be slightly more adult to yank the media's chain. But let's be clear: He cannot resist the siren call of conspiracy theories painting him as a hero oppressed by the lying press for long. Nor is there any reason to believe he is legitimately shaken by the knowledge that a whole bunch of people are going to die, because that would require care for others he simply doesn't possess. It's true that his long-term political self-interest lies in at least trying to fake compassion and taking serious steps to slow the disease, his impulsiveness and his paranoid-narcissist victim complex will almost surely win out.

No good can come of the press rewarding Trump for these temporary, reflexive moments where he pulls it together to fake being a serious person. Has everybody forgotten "Trump Urges Unity vs. Racism" after the Charlottesville riots? How many times does the Washington press corps need the rug pulled out from under them before they stop stepping on that stupid rug?