Not an April Fool: This humiliating failure is actually our president during a national crisis

Turns out a second-rate celebrity whose only skill was in branding was not qualified for this. What a surprise 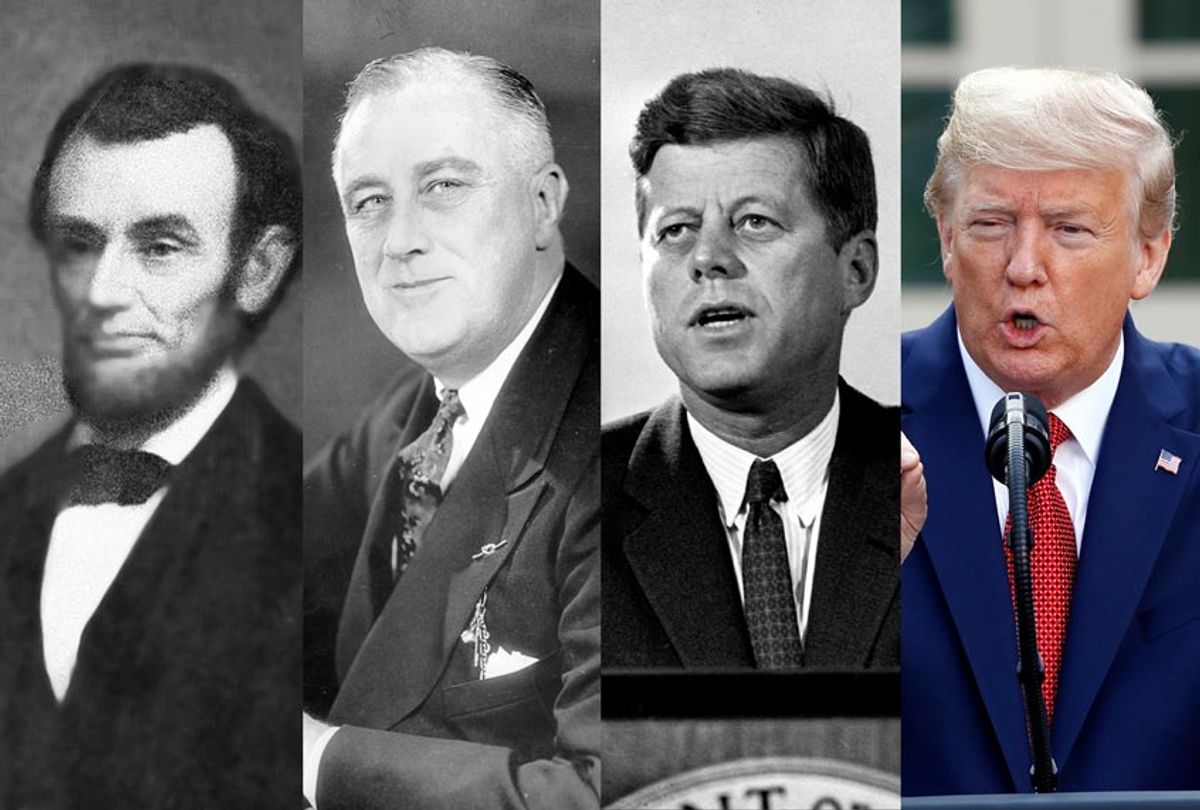 Donald Trump thought the job of being president was to "make deals" in the same way he made deals as president of the Trump Organization, his family business. The job does require negotiation skills, to be sure, but it turns out that Trump is very bad at those, which should have been obvious to anyone who gave a cursory look at his business career.

Trump had a lot of help from his father when it came to the real estate business, but his real talent was for turning celebrity into cash. It is literally the only thing he's good at. He spent decades working the tabloid press in New York City, building his name as a Big Player with a Big Lifestyle, culminating in his very own reality TV show. He was a Kardashian before Kardashians had been invented — a person whose "job" is simply to live in the media.

The job of a president is just a bit more complicated than that. There is an element of celebrity, of course, especially in the modern era. Trump has indeed mastered that side of the job. In fact, it's pretty much all he understands. He bragged about the ratings for his coronavirus campaign rallies and made this weird observation about them during Tuesday's event:

He's good at being the center of attention. You have to give him that. But aside from dealing with Congress and foreign leaders — which, as mentioned, he does very badly —the main job of a president is to manage the federal government and lead the nation in a time of crisis. And Donald Trump has absolutely no idea how to do either of those things.

Despite his manufactured image from his reality show "The Apprentice," he's never known how to manage anything. Back in 2016, Politico reported:

Rather than magisterial and decisive, Trump the actual boss swings wildly between micromanaging meddler and can't-be-bothered, broad-brush, big-picture thinker. He is both impulsive and intuitive, for better and for worse. He hires on gut instinct rather than qualifications; he listens to others, but not as much or as often as he listens to himself.

It is no surprise, then, that he has floundered in trying to do what presidents must do in a national emergency — oversee the federal government's response. All he can do is hold those White House campaign rallies he thinks people are enjoying so much.

There have been a number of great articles written in recent days about the "lost month" of February when Trump consistently downplayed the crisis even when people who understood the clear and present danger were running around the government with their hair on fire. The failure to get testing up and running in the early days will be remembered as a deadly blunder. His recent lurch from a promise to end all public health mitigation strategies by Easter and relaunch the economy to predicting the deaths of 100,000 to 200,000 people has been dizzying.

The celebrity PR strategy is obvious. After downplaying the virus as no worse than the flu and insisting that life should go back to normal immediately, he's now calling himself a hero for saying no to the people who said it was the flu and wanted life to go back to normal. Anything less than 200,000 dead will be proof of his genius. You have to give him points for chutzpah, if for absolutely nothing else.

The problem is that the crisis management isn't getting any better. For instance, Politico reported on Tuesday that even as some people in the government have been asking foreign countries to pitch in with much-needed protective gear, another part of the government was actually shipping that same gear overseas — to those same countries.

Trump aides were reportedly alarmed when they heard about this:

Crossed wires would only confuse our allies, they worried, or worse — offend them. And Americans confronting a surging death toll and shortages of medical equipment back home would likely be outraged.

Obviously, it's perfectly normal for the U.S. to send urgent medical supplies to other countries. What's not normal is that those supplies are so necessary and so hard to obtain here at home. Did no one notice the 24/7 screaming on cable news about this shortage?

According to the Washington Post, state governors are still pleading for the equipment they were promised from the federal stockpile, and testing is still a major problem, which may actually have been made worse when private companies entered the market.

Trump told the states they needed to go out and get equipment for themselves and now they're all bidding against one another — as well as against FEMA, which only recently entered the game. The Pentagon is still holding onto 2,000 ventilators because nobody has clearly decided where to send them.

Meanwhile, Trump is apparently on the horn all day, chatting with everyone from A-Rod to Wolfgang Puck and announcing policy changes based on what they tell him.

Cooped up in the White House for weeks now, except for a brief trip to Virginia on Saturday, Trump appears to be working the phones even harder than usual. Corporate executives, governors, celebrities and foreign leaders looking to get something from the U.S. government seem especially eager to secure a telephonic audience with the president.

Puck apparently got him to agree to restore the tax deduction for business meals. Lord only knows what foreign adversaries and corporate CEOs are cajoling him into doing.

Up until recently, it appeared that Peter Navarro, Trump's China-hawk economic adviser, had been given the logistical task of working with industry to get medical supplies to where they most needed. That obviously didn't go too well. So last week they finally brought in a professional, Rear Adm. John Polowczy, to deal with the logjam.

On Sunday he told Axios, "Today, I, as leader of FEMA's supply chain task force, am blind to where all the product is."  That's very reassuring.

Republicans have said for years that we need to run the government like a business because people in the private sector know how to get things done. Unfortunately, the businessman they picked to take this on was the owner of a vanity business dedicated to selling his phony "brand" as a self-made billionaire. When faced with a serious managerial crisis and a demand for real leadership, he didn't have the faintest idea how to do it.

It may be April Fool's Day, but this is no joke. We are now in the third month of this deadly epidemic and the federal government is still flailing around, and failing us.