"He is a terrible man": Michiel Huisman on playing a cult leader in horror flick "The Other Lamb"

Salon spoke to the Dutch actor about researching cults, the bloody scenes, and giving the film an "eerie" look 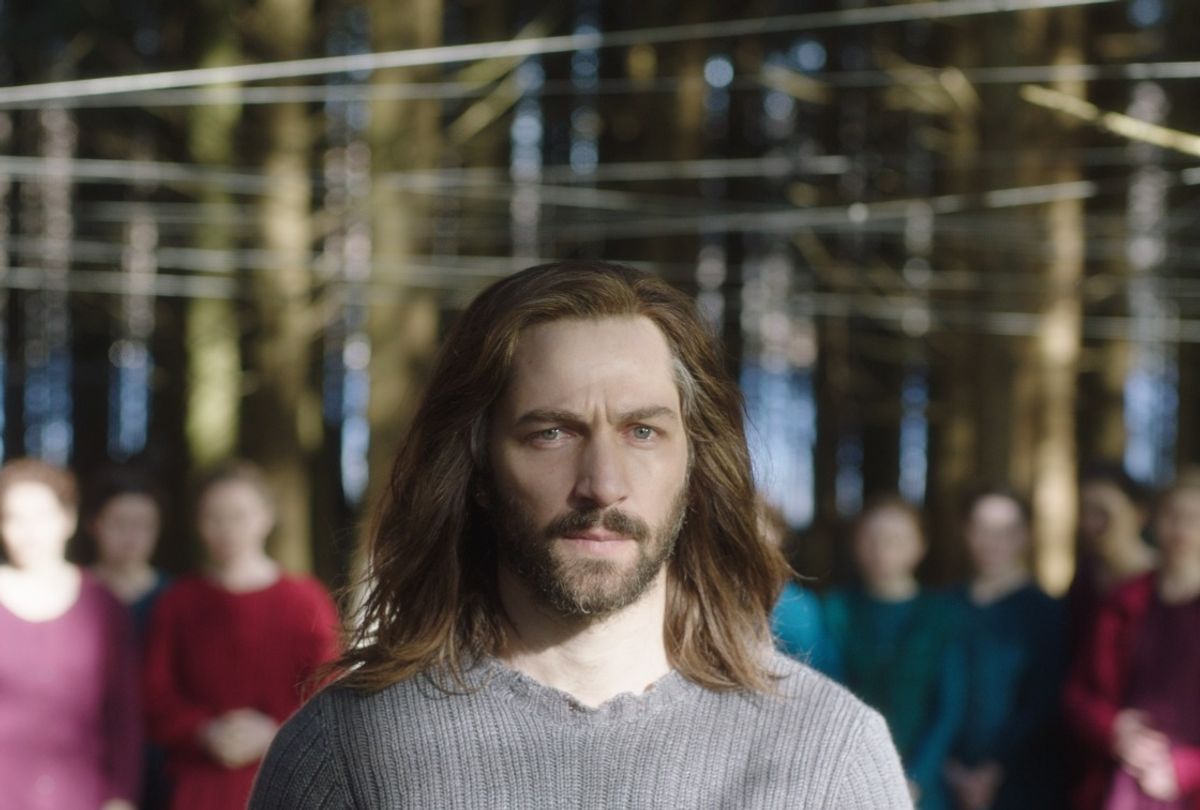 Michiel Huisman in "The Other Lamb" (IFC Films)
--

In the moody and atmospheric new horror-drama, "The Other Lamb," available April 3 on demand, Michiel Huisman ("Game of Thrones," "The Haunting fo Hill House") plays Shepherd, a messiah-like character, complete with skirted robes and Jesus-like hair, who presides over a group of about two dozen women in the remote countryside. (It's all women, save Shepherd; as someone observes wryly, "You can only have one ram in a flock.")

"The Other Lamb" generates its tension as Shepherd endures various power shifts. He expresses his affection for the pure (i.e., virginal) Selah (Raffey Cassidy), but she slowly comes to question both the rules and this man she blindly trusts. He also is forced by the police to relocate from his compound, which prompts "The Flock," as the group is known, to embark on an arduous trek. As Shepherd exerts his patriarchy over the women, situations arise that challenge everyone and don't necessarily go well for some.

Huisman makes Shepherd equally seductive and sinister, as when he caresses a lock of Selah's hair, or sensually places two of his fingers in a woman's mouth. There is also an intense sequence that involves him ritually smearing blood on his followers' cheeks as they encircle him. But not everyone is enamored with this cult leader. Sarah (Denise Gough), who is Shepherd's "cursed wife," is an outcast who likens him to the sun — bright and glorious until it burns you. And Shepherd is violent towards anyone who defies him.

The Dutch actor spoke with Salon about his penchant for playing such charismatic yet problematic men, as well as his thoughts on cults and his career.

It is disturbing to see people exert power over the blindly faithful. What observations do you have about cults in general, and Shepherd and "The Flock" in particular?

I think that when the film starts, the cult we follow is on its decline. The ideological way that it started and slowly built over the course of two decades is very different from the mechanics of the cult it turned into. It started because a lot of these women were looking for family and support, something they all were missing in their personal lives. They found it under the wings of my character, Shepherd, who wanted to be a good father and a good husband. But as time goes on and the group grows, it becomes almost impossible for him to keep things the way they are, stay in the center of their lives, keep them away from the outside world, and be self-sufficient. For me, playing a character so dark and manipulative, it was important to understand where it started for him. I didn't want to play him as a "bad guy," although he is a terrible man. He's not succeeding in being a good father.

There is, obviously, a toxic masculinity at work in "The Other Lamb." Shepherd has his followers bathe him, sleep with him, and more. He abuses or casts out anyone who defies him. How did you process those ideas in creating the character of Shepherd?

It was understanding why he's doing something and why he believes he's doing the right thing. I think he constantly thinks he's doing the right thing for his flock. Even when he makes the most horrible decision, he believes he did the right thing for his "daughters." The Jesus-like reference, I felt in good hands with the director [Malgorzata Szumowska aka "Malgo"] and the cinematographer [Michal Englert], and I wouldn't have to worry about that aspect of his character. I had to worry about the psyche of this character and make him look elevated and mysterious.

You seem to excel at playing men who are charismatic and creepy. What is the secret to playing that?

In an ideal scenario, that's what we wanted to achieve — you feel that control. I don't know that's something I can play. I don't think you can perform that control as an actor. You need to believe that you have that control, and really understand the story you are in and where your character comes from. But so much of that — if it works — is movie magic.

Have you had any strange fan responses from women, or even men, who "worship" you?

[Laughs]. Um, yeah, you know. I don't get "worship," but it is sometimes strange when people who don't know me come up and say, "I love you so much." It makes me slightly uncomfortable. They don't know me. I had to put that aside. Shepherd is very comfortable with being worshipped.

The film shows one bizarre ritual of blood-smearing and other unusual moments that are quite powerful. Did you have any input about these scenes?

The blood smearing — I'm not sure that was is in the script, or the bit involving Shepherd putting his fingers in the mouths of his wives. Malgo said the day before, "We need something weird. Maybe you can put your hand in their mouths?" That's a messed up idea, and its discomfiting. The list of ideas like that goes on and on. There's a moment, it's such a brutal scene, where the flock is lost and in the middle of nowhere, and one of Shepherd's followers has an idea of where to go and in an effort to regain control of the situation and regain power, Shepherd has to put her back in her place. The script had him give a sermon, but on set, Malgo said, "Why don't you just kick her and drag her?" In that sense, making this film was really an artistic process, which made it stand out for me. It's rare you experience this kind of freedom and reinventing a story on set. It's also very scary.

Have you ever lived in a commune-like situation? How would you fare in a group environment like that? Do you have a hippie side?

No. No, Thank God! In that sense, I didn't have any inside information. Two to three years ago, when I started preparing for this role, cult documentaries were popping up everywhere. "The End of the World Cult," and "Holy Hell," especially, really opened my eyes and Malgo's eyes. Because we are so used to these cult leaders looking a certain way. In "Holy Hell," the [cult leader] wears a speedo and Ray Bans. We can do whatever we want as long as he has a hold over his flock.

I think that one part of my preparation was watching these docs and reading about cults, but then there came a point where I had to let all of that go and start creating my own Shepherd. The most important part was understanding how it all started, so watching those docs helped me understand a situation [in "The Other Lamb"] where this cult leader was a man who wanted to be a good husband to his wife, and then help another woman in the community, and it slowly grew. But then at some point it becomes something else and about staying in control.

The film is visually gorgeous. I understand you are a bit of a photographer and have been posting images of your work on Instagram. Can you talk about that hobby?

I am. I love photography, and I think that the movie looks very distinct and stunning, which is largely because of the talent of the amazing cinematographer, who made every movie of Malgo's. Using wide angles and closeups and a lens that gave an eerie and distorted feel, I knew this film was going to look different and otherworldly, and that helped me do what I have to do.

Malgo and Michal are film buffs versed in European arthouse cinema, and we were sharing movies that inspire us, and one filmmaker I'd never seen anything by was  [Andrei] Tarkovksy. I don't know where I've been, or what I've been watching, but it wasn't Tarkovsky. But now it is. I love the way he shoots his movies, and some of the shots in our film found their inspiration in his world.

This film is billed as a horror film. You also recently made "The Haunting of Hill House," but you've done romantic films, musical projects, and other genres from sci-fi to thrillers and more. I like how versatile you are as an actor. Any career thoughts?

It is really fun to be able to sink your teeth into a project or character like Shepherd in "The Other Lamb." But I'd lose my sanity if I'd only play Shepherds. It's that diversity, different genres, that makes things interesting and keeps it fun. And, of course, I'm doing other stuff now, a fun dark comedy for HBO Max called, "The Flight Attendant." I'm not the title character. I am a passenger she [Kaley Cuoco] meets and has a fling with. It's the other end of the spectrum.

Shepherd finds a place that he calls "Eden." Where are some of the most spectacular places you've visited or lived?

That place he calls Eden was in Ireland, in the mountains of Wicklow, and at a lake the Guinness family owns. It is a spectacular place. It would also be a very safe place right now. One of the fun things about being an actor is getting to travel to all these crazy locations all over the world. I was once on location in the desert in Namibia for a film, "The Red Sea Diving Resort." That will stay in the top five of my favorite places.

"The Other Lamb" debuts on demand and on digital platforms on Friday, April 3.