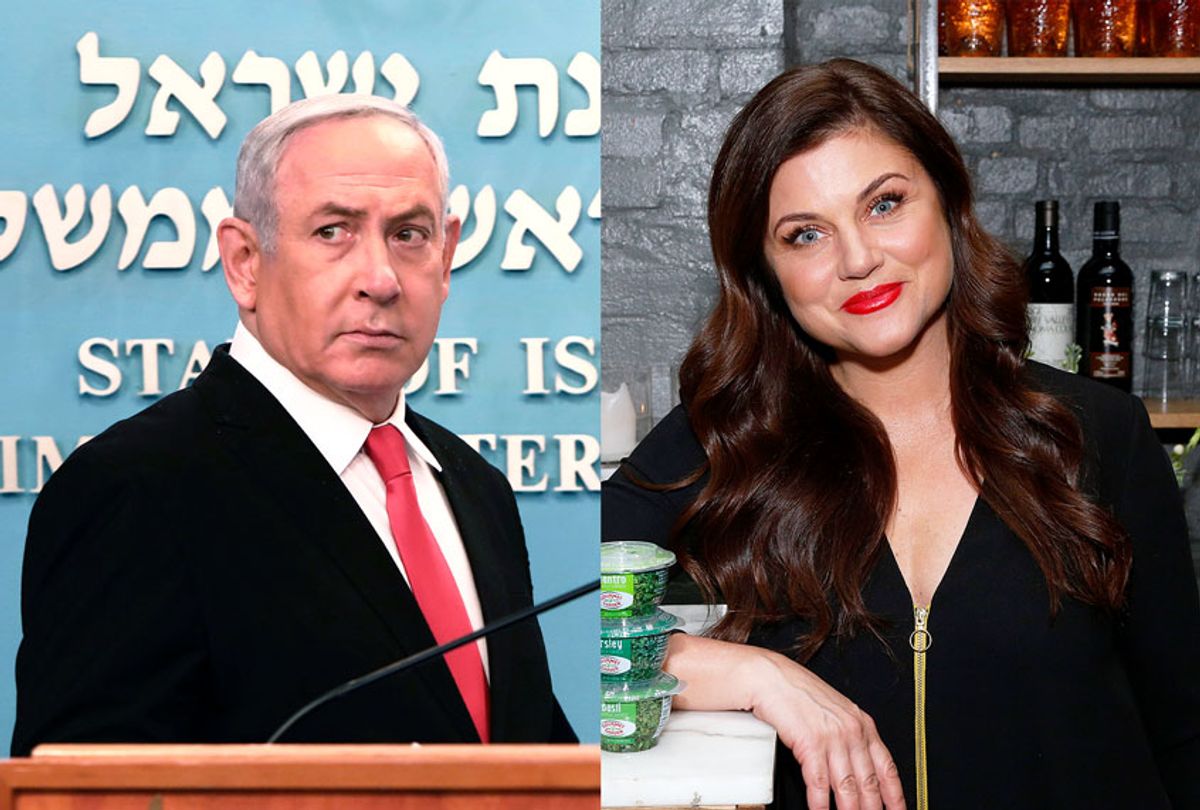 Israeli Prime Minister Benjamin Netanyahu showed a video to his Cabinet that he falsely claimed was proof the government of Iran had covered up deaths from the new coronavirus. In fact, it was a footage from a Hallmark program starring "Saved By the Bell" cast member Tiffani Thiessen.

The clip showed dead bodies being dropped into garbage dumps amid an outbreak in a scene from the 2007 mini-series "Pandemic," according to a scoop from Axios. The mini-series followed the story of a Centers for Disease Control doctor working to find a vaccine amid a fictional bird flu offshoot in Los Angeles. Hallmark is now better known for its Christmas movies, content which Salon's Amanda Marcotte has described as "fascist propaganda."

Netanyahu and other Israeli officials believe there have been as many five times more COVID-19 deaths in Iran than the roughly 3,000 that have been officially reported, Axios reported. During a Monday conference call with his Cabinet, the Israeli prime minister said his national security adviser Meir Ben-Shabbat had shown him a video that proved a cover-up. Officials asked to see the video, and Netanyahu instructed Ben-Shabbat to send it to his entire Cabinet.

"The prime minister's office didn't deny this account," Axios reported. "It said the video had only been sent to three Cabinet ministers who requested it and were told it came from social media and its authenticity was unclear."

Netanyahu re-entered quarantine Thursday after Yaakov Litzman, his health minister, was confirmed to have contracted COVID-19, according to The Times of Israel. The Israeli prime minister had just emerged from quarantine Wednesday evening after it was revealed that another one of his advisers had contracted the virus.

Other Israeli officials are also self-quarantining due to Litzman's diagnosis including Ben-Shabbat, Health Ministry Director General Moshe Bar Siman-Tov and Mossad Chief Yossi Cohen. Israel Defense Forces Chief of Staff Aviv Kochavi is working from self-quarantine after being exposed to an infected officer, though he has tested negative.

More than 6,000 Israelis have tested positive for the coronavirus as of Thursday, with 33 deaths, 83 individuals on life support and another 107 in serious condition. One Israeli tourist in Italy also died of the virus. To cope with the pandemic, Netanyahu told Israelis Wednesday only to celebrate upcoming religious holidays with immediate family and to wear face masks in public.

As in the U.S., unemployment has also risen in Israel amid tight restrictions. In response to the 24.4% unemployment rate, Netanyahu announced Wednesday that the government would give 500 shekels per child up to a maximum of four children and 500 shekels to the elderly as a "Passover gift."

The Israeli government has particularly struggled with containing the virus in ultra-Orthodox communities. Though the Haredim are only 12% of Israel's population, they comprise up to 60% of their COVID-19 patients, in large part because they tend to only follow orders from their rabbis and ignore instructions from government officials.

Many Haredim continued to hold large prayer services and weddings in spite of the restrictions imposed by the Israeli government, with state officials working to find ways of spreading the message to Haredim who do not own smartphones or TVs. When police marched through a Jerusalem neighborhood this week and distributed fines to individuals ignoring stay-at-home orders, some Haredim reportedly shouted "Nazis" to express their disagreement with the policy.