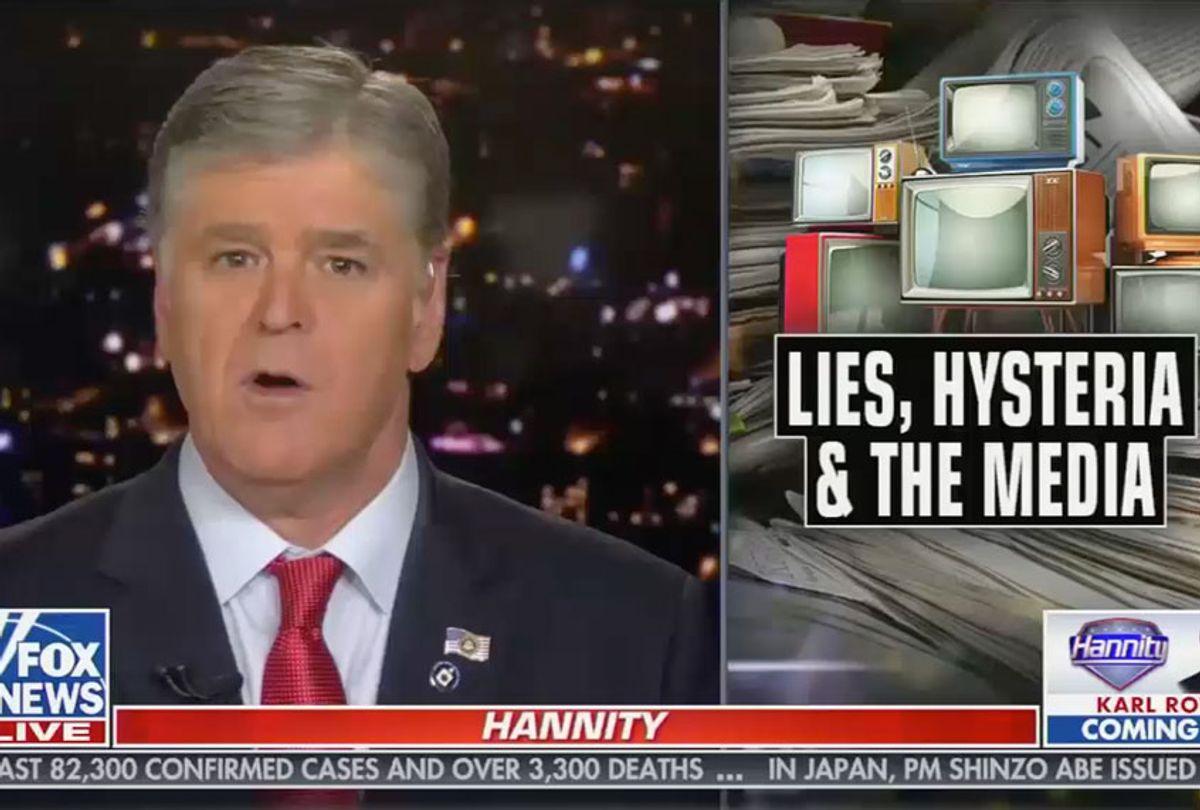 Fox News host Sean Hannity threatened to sue a purported "media mob" during a Wednesday night segment, in which he addressed criticisms who rebuked the right-wing network's coverage of the coronavirus pandemic as dangerous.

"What they are doing is repulsive," Hannity claimed. "It is ugly. It hurts the country. It shouldn't surprise us, because they have hated Trump every second, minute, hour of every 24 hour day for over three years. They represent the media wing of the Democratic Party: nothing more, nothing less."

Hannity opened the segment by falsely claiming that a "media mob" was "looking for ways, oh, to bludgeon President [Donald] Trump politically" while covering the global pandemic. The Fox News host alleged that the so-called "mob" had misrepresented his coverage of the crisis and pointed to a timeline of his work on his website "so they can't plead ignorance when I think about suing them." (Salon was one of the outlets mentioned in the aforementioned post.)

During his Wednesday broadcast, Hannity pointed to editorials published by mainstream media outlets, which he alleged had hurt the country. He called out a Feb. 5 op-ed op-ed in The Washington Post that criticized Trump's China travel ban as ineffective and racially charged by Rosie Spinks, as well as a Feb. 26 column The New York Times in which Gail Collins advocated for calling COVID-19 the "Trumpvirus." Hannity also attacked opinion pieces by The Post's Erik Wemple (whom he repeatedly insulted as "Pimple") that called for the Fox News host to be fired and praised CNN and MSNBC for refusing to carry Trump's full press briefings on the pandemic.

Though Hannity interviewed Dr. Anthony Fauci in January and expressed concern about the pandemic at the time, he has on other occasions downplayed its significance. He mocked left-wing concerns about the pandemic in a Feb. 25 monologue in which he claimed that "the media mob and the Democratic extreme radical socialist party would like you to think" that "the apocalypse is imminent, and you're going to all die. All of you, in the next 48 hours. And it's all President Trump's fault."

Hannity lamented during a March 9 episode that "I don't like how we are scaring people unnecessarily" and claimed the president's critics were trying to "bludgeon" him "with this new hoax." He also falsely claimed the next day that "no president ever except Donald Trump ever acted faster, ever acted sooner or has done more to stop the spread of an infectious disease." He read a letter from an unidentified doctor last week touting the possible merits of hydroxychloroquine, an unproven drug treatment for the new coronavirus that has been touted by President Donald Trump in spite of the warnings of Dr. Anthony Fauci.

The Fox News host also invited Trump onto his program the previous week, where the president claimed that "we have thousands or hundreds of thousands of people that get better, just by, you know, sitting around and even going to work, some of them go to work, but they get better."

Hannity is not alone among Fox personalities who have spread misinformation about the pandemic. Lynette "Diamond" Hardaway and Rochelle "Silk" Richardson falsely claimed Monday that the media had inflated the number of COVID-19 deaths in order to hurt Trump. Laura Ingraham originally praised Trump for denying the severity of the pandemic, describing his critics as "panic pushers" and inaccurately claiming that the Centers for Disease Control is a "highly politicized organization."

Former Fox Business Network host Trish Regan claimed last month that "this is impeachment all over again. And like with the Mueller investigation, like with Ukraine-gate, they don't care who they hurt. Whether it be their need to create mass hysteria to encourage a market sell-off unlike anything we've seen recently, or whether it be to create mass hysteria to stop our economy dead in its tracks, don't kid yourself. They told us how much they crave a recession as a way to get rid of Donald Trump." (Regan was later dismissed from Fox Business Network.)