Trump attacks Fox News reporter for asking about disbanded pandemic team: “Are you working for CNN?”

“I thought you were with Fox,” Trump said after lying in response to John Roberts' questions 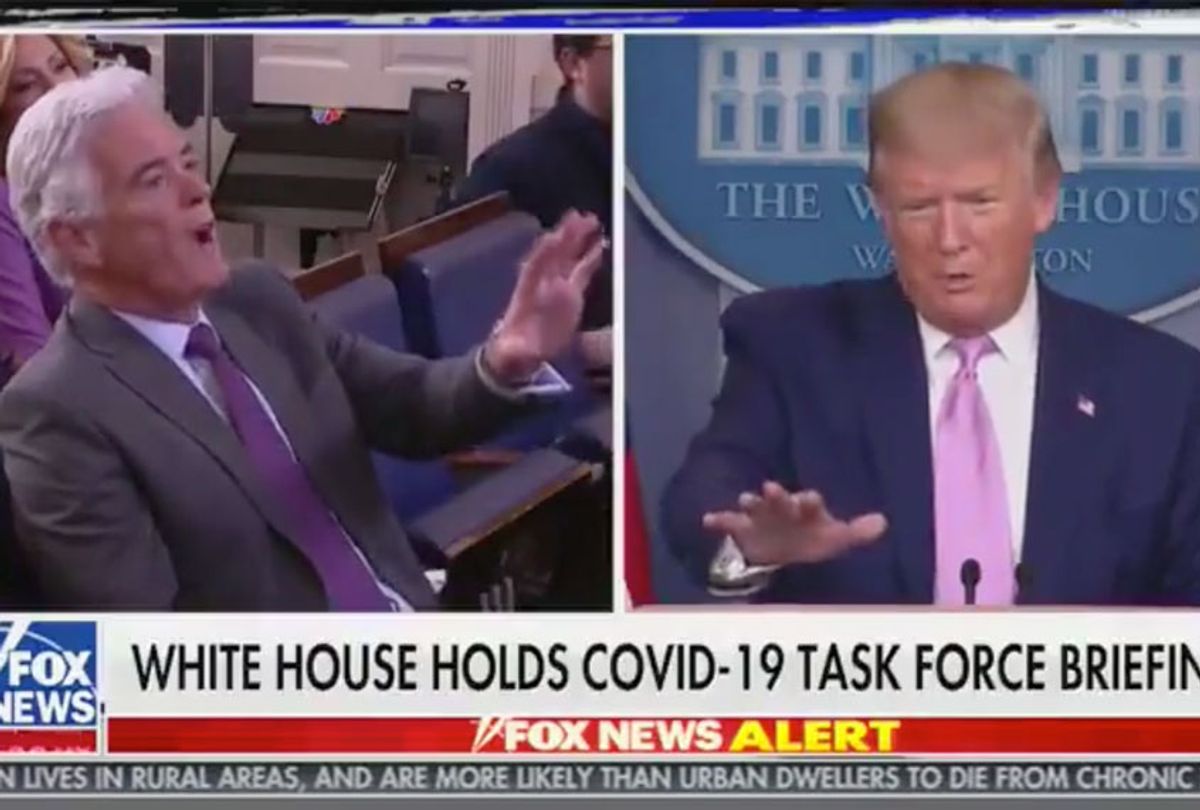 President Donald Trump lashed out at Fox News reporter John Roberts on Wednesday for asking about his administration's decision to disband the National Security Council's pandemic team prior to the coronavirus outbreak.

Trump first falsely claimed that the administration's botched rollout of coronavirus testing was former President Barack Obama's fault, even though the new coronavirus did not exist when his predecessor was in office and neither did tests for it.

In fact, the tests were created earlier this year by the Centers for Disease Control and Prevention, which is headed by Trump-appointed director Robert Redfield. The New York Times recently detailed how the administration "lost" an entire month in the fight against the virus by repeatedly fumbling the testing rollout.

Roberts called out Trump's false claim, noting that it was his administration which had disbanded the White House pandemic team created under the Obama administration.

"You have talked about the failings of the Obama administration in leaving you with empty shelves and no plans," Roberts said. "They have said you got rid of the pandemic office in the National Security Council–"

"We didn't do that," Trump interjected, pushing another false claim. "That turned out to be a false story."

"What are you, working for CNN?" Trump added.

"No, no, no," Roberts replied. "I'm pointing out what they have said and what you have said – that's all."

"I thought you were with Fox," Trump said. "But Fox isn't so easy, either. Don't kid yourself."

"It's not about Fox or CNN," Roberts objected.

"Look, John, let me tell you something. You know that's a false story," Trump falsely insisted. "What you just said is a false story."

Trump added that Dr. Anthony Fauci, the director of the National Institute of Allergy and Infectious Diseases, "knows this better than anybody," though he quickly moved on to the next question.

Fauci did not comment on the issue during the news briefing but testified to Congress last month that the team was, in fact, disbanded and said he was not thrilled about it.

"I would say we worked very well with that office," he told Congress. "It would be nice if the office was still there."

It was not the first time Trump attempted to dodge questions about his administration's decision to disband the pandemic team ahead of the coronavirus crisis ,even though numerous fact-checkers have confirmed it was ordered in 2018 by then-National Security Advisor John Bolton.

PBS NewsHour reporter Yamiche Alcindor grilled Trump on the issue last month after he declared that he does not "take responsibility at all" for the testing rollout.

"Well, I just think it's a nasty question," Trump complained. "And when you say 'me,' I didn't do it. We have a group of people."

"It's your administration," Alcindor replied.

"I mean, you say we did that," Trump insisted. "I don't know anything about it."

"You don't know about the reorganization that happened at the National Security Council?" she pressed.

"It's the administration. Perhaps they do that," Trump replied. "You know, people let people go. You used to be with a different newspaper than you are now."

But when Trump was asked a similar question about whether he regretted his administration's proposals calling to gut the budgets of the CDC, National Institutes of Health and the World Health Organization ahead of the pandemic in February, the president said he had no regrets.

"Some of the people we cut, they haven't been used for many, many years. And if — if we have a need, we can get them very quickly," he said at the time. "And rather than spending the money — and I'm a business person, I don't like having thousands of people around when you don't need them — when we need them, we can get them back very quickly."

Dr. Rishi Desai, the chief medical officer of the company Osmosis, told Fox News on Wednesday that it was exactly this attitude that led to the U.S. quickly eclipsing any other country in the number of reported coronavirus cases.

"They should've been working on it for months," he said. "We knew coronavirus was coming. We knew that it was a respiratory disease. We knew it was person-to-person . . . We had a very weak response."