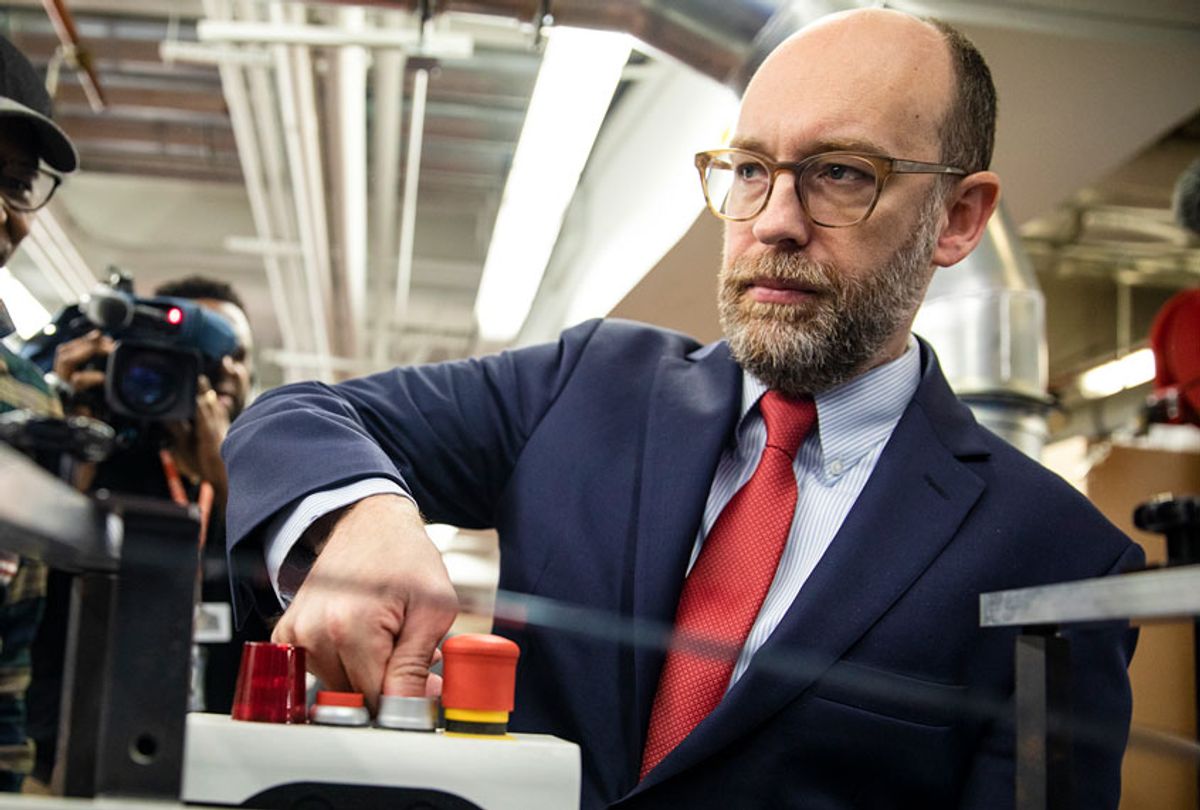 Acting Director of the Office of Management and Budget Russ Vought presses the button that starts the machine that will print copies of US President Donald Trump's proposed budget for the U.S. Government for the 2021 Fiscal Year are printed at the Government Publishing Office ahead of its release next week on February 6, 2020 in Washington, DC. Once released, the budget will be debated in Congress before it becomes official. (Samuel Corum/Getty Images)
--

President Donald Trump's budget director stood by proposed budget cuts to the Centers for Disease Control and Prevention (CDC) despite the ongoing outbreak of COVID-19, better known as the coronavirus.

Russ Vought, the acting director of the White House Office of Management and Budget, told Rep. Matt Cartwright, D-Pa., during a congressional hearing on Tuesday that the administration does not plan on amending its 2021 budget. That budget proposes reducing Health and Human Services funding by $9.5 billion, in the process cutting $1.2 billion from the CDC's budget (a reduction of 15%) and eliminating $35 million from the Infection Diseases Rapid Response Reserve Fund.

Vought initially responded to Cartwright's question by pointing to the $8.3 billion emergency supplemental package passed by Congress last week. That money would be spread out over many years, however, and had to be increased by Congress from the $2.5 billion initially required by the White House. It also does not impact the CDC's long term spending priorities.

"The question is today, as we sit here and we know about coronavirus and the impact it's taking on the people of the world and the economies of the world and the stock market and everything, as you sit here today, are you ready to take that back?" Cartwright asked Vought regarding the 2021 budget cuts.

A spokesman for the White House Office of Management and Budget said that the CDC cuts did not impact the administration's ability to fight infectious diseases.

"The acting director's remarks fit a pattern within the administration of gutting our preparedness resources for infectious disease outbreaks," Cartwright told Salon in an emailed statement. "The way I see it, this lack of investment is a key reason why we find ourselves behind the eight-ball today. Right now, it's critical that we move quickly to pass additional response legislation that puts workers and families first as this virus continues to disrupt our lives and our economy. Going forward, we need to work together to ensure the government is fully prepared for future viral outbreaks."

Salon reached out to 314 Action, a nonprofit political action committee that seeks to elect scientists to political offices in the United States, about the Trump administration's handling of this crisis.

"This administration has shown over and over again that they are not going to let the facts and evidence get in the way of whatever their agenda happens to be," Shaughnessy Naughton told Salon on Thursday. Naughton is president of 314 Action.

"It's kind of remarkable actually, that they are consistent in their failure to prepare, and then often working actively against preparedness measures, and then blaming Obama for the predictable, chaotic outcome," Naughton added, referring to Trump's efforts to blame former President Barack Obama for America's poor response to the coronavirus. (Trump's claims about Obama have been repeatedly debunked.) "Congress just allocated what, $8 billion to the Coronavirus, a crisis that we're facing. And here they are trying to cut funds to the infectious disease rapid response."

The Trump administration previousliy implemented a number of policies that weakened America's ability to fight the ongoing coronavirus outbreak. The administration disbanded its global health security team in 2018. It asked for a $65 million budget cut to the CDC's small center on emerging and zoonotic (meaning animal-to-human transmitted) infectious diseases in 2018 (or a 10% cut), then a 19% reduction in 2019 and a 20% reduction in 2020.

While most of this funding was restored by Congress, Trump still succeeded in reducing the overall spending for relevant CDC programs by 10% from what it was in 2016 after being adjusted for inflation. He also proposed cutting the overall CDC budget by $1.3 billion in the 2020 fiscal year.

Trump has also repeatedly lied about important details regarding the COVID-19 outbreak. This includes saying that a vaccine is being developed "rapidly," claiming diagnoses in the United States are "going very substantially down — not up" and contesting the World Health Organization's claim that the disease has a 3.4% mortality rate. He has also said that tests are available to anyone who wants them, even though Health and Human Services Secretary Alex Azar has admitted that he did not know how many tests have been performed.

Naughton also criticized Trump's attempt to improve his image by delivering a national address on Wednesday night about the outbreak. That speech was marred by his struggles reading the teleprompter and needing to correct a significant error in his speech.

"I thought it was remarkable and not in a good way," Naughton told Salon. "I thought that their signaling that he was going to give a speech from the Oval Office, but that meant he was going to get serious about being a leader at a time when our nation needs to president to act presidential and take the lead on calming the fears of the American people as to what's going on and that the administration is actively and productively addressing it. And instead, he did quite the opposite."