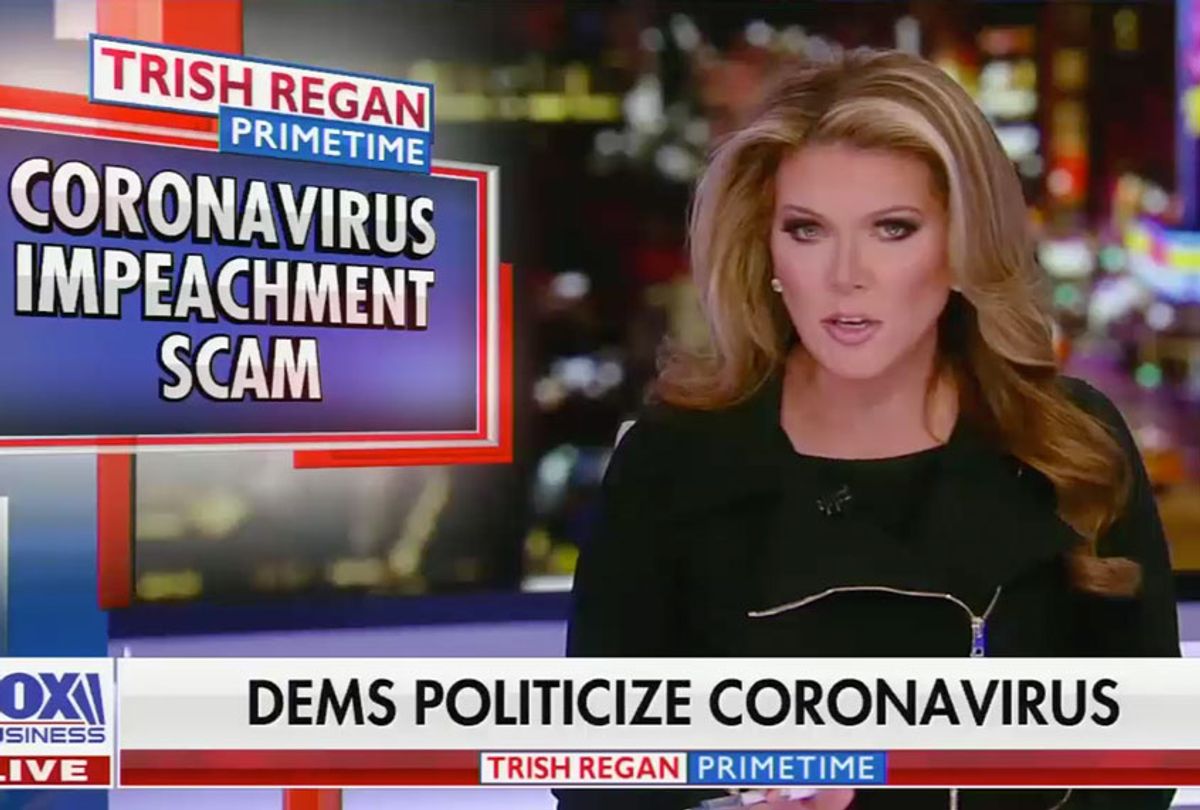 Fox Business host Trish Regan accused Democrats of "another attempt to impeach the president" through their criticisms of President Donald Trump's response to the coronavirus outbreak.

"The chorus of hate being leveled at the president is nearing a crescendo as Democrats blame him — and only him — for a virus that originated halfway around the world," Regan told her viewers Monday. "This is yet another attempt to impeach the president, and sadly it seems they care very little for any of the destruction they are leaving in their wake — losses in the stock market. All this, unfortunately, just part of the political casualties for them."

After saying "this is the time to be united" and accusing liberals of "the absolute opposite," Regan claimed that members of the media and politicians were using "the coronavirus in an attempt to demonize and destroy the president." She then played clips of those individuals as they accused Trump of being dishonest about the coronavirus and failing to have a plan to combat it.

Regan concluded, "This is impeachment all over again. And like with the Mueller investigation, like with Ukraine-gate, they don't care who they hurt. Whether it be their need to create mass hysteria to encourage a market sell-off unlike anything we've seen recently, or whether it be to create mass hysteria to stop our economy dead in its tracks, don't kid yourself. They told us how much they crave a recession as a way to get rid of Donald Trump."

There have been 4,072 confirmed deaths due to the coronavirus, which has also infected as many as 114,633 people as of Tuesday morning, according to CNN. Most of the victims live in mainland China, which has 80,754 infections and 3,136 deaths. Every country in the European Union has confirmed cases, with the entire nation of Italy going on lockdown Monday to contain an especially severe outbreak. There have been more than 700 confirmed cases of the coronavirus in the U.S. since Monday, reaching 36 states and taking 26 lives.

China previously placed a strict quarantine on Wuhan, where the virus originated, and imposed other measures to control transportation and social interaction in more populous areas like Beijing. Iran shut down its government, educational, religious, entertainment and other institutions, while South Korea focused on mass public testing. In Japan, companies transitioned to teleworking and schools temporarily closed.

Trump, by contrast, has taken significantly fewer measures to address the virus. Prior to the outbreak, the president fired all employees of the government's pandemic response chain of command. He did not reverse those cuts after learning of the coronavirus outbreak, according to Foreign Policy.

As Politico reported over the weekend:

For six weeks behind the scenes, and now increasingly in public, Trump has undermined his administration's own efforts to fight the coronavirus outbreak — resisting attempts to plan for worst-case scenarios, overturning a public-health plan upon request from political allies and repeating only the warnings that he chose to hear.

Trump passed an $8 billion legislative package to help combat the disease, an amount which critics called too low. Because millions of Americans lack health insurance and all workers do not receive paid sick leave, experts claim the country is particularly susceptible to an outbreak. The Trump administration continues to try to dismantle the Affordable Care Act.

Health and Human Services Secretary Alex Azar admitted Tuesday that he did not know how many coronavirus tests have been performed in the U.S. The president addressed economic concerns which have arisen from the coronavirus — most of them stemming from the virus' negative impact on the stock market — by announcing Monday that he would encourage lawmakers to reduce payroll taxes and provide assistance to hourly workers. In fact, Trump's rhetoric has focused more on the virus' economic impact than on the risk to public health.

Trump has lied about the prospects of a vaccine, saying that it was being developed "rapidly." However, a vaccine would take at least a year to bring an effective vaccine to the market. The president repeatedly alleged that there were only 15 cases in the U.S. at a time when there were 60, and he falsely claimed that tests were available to anyone who wanted them.

Trump also lied last month when he said that coronavirus cases in the U.S. were "going very substantially down — not up." The CDC projected an increase in diagnoses, and Trump was informed earlier that day of the first person on U.S. soil to contract the disease without links to travel. He challenged the World Health Organization's claim that the mortality rate from the coronavirus was 3.4% based on a "hunch." He has also refusing to self-quarantine despite interacting with individuals who had been in contact with a carrier of the disease.

Fox News has also spread inaccurate information about the coronavirus. The network's hosts and guests have promoted a conspiracy theory that the virus was engineered as a bioweapon; linked the virus to America's homelessness epidemic; and promoted the racist claim that the virus was caused by Chinese citizens eating raw bats and snakes. Perhaps as a result of the messaging by Trump and his conservative allies in the media, A recent Reuters/Ipsos poll found that only two out of 10 Republicans believe the coronavirus poses an imminent threat compared to four out of 10 Democrats.

The author of this story appeared on Trish Regan's show last year and has interviewed her on several occasions. Multiple attempts to reach Fox Business have not been returned.