He was slammed for the racist remarks: "Bill O'Reilly is gone, and it's time for Fox to ditch Jesse Watters, too" 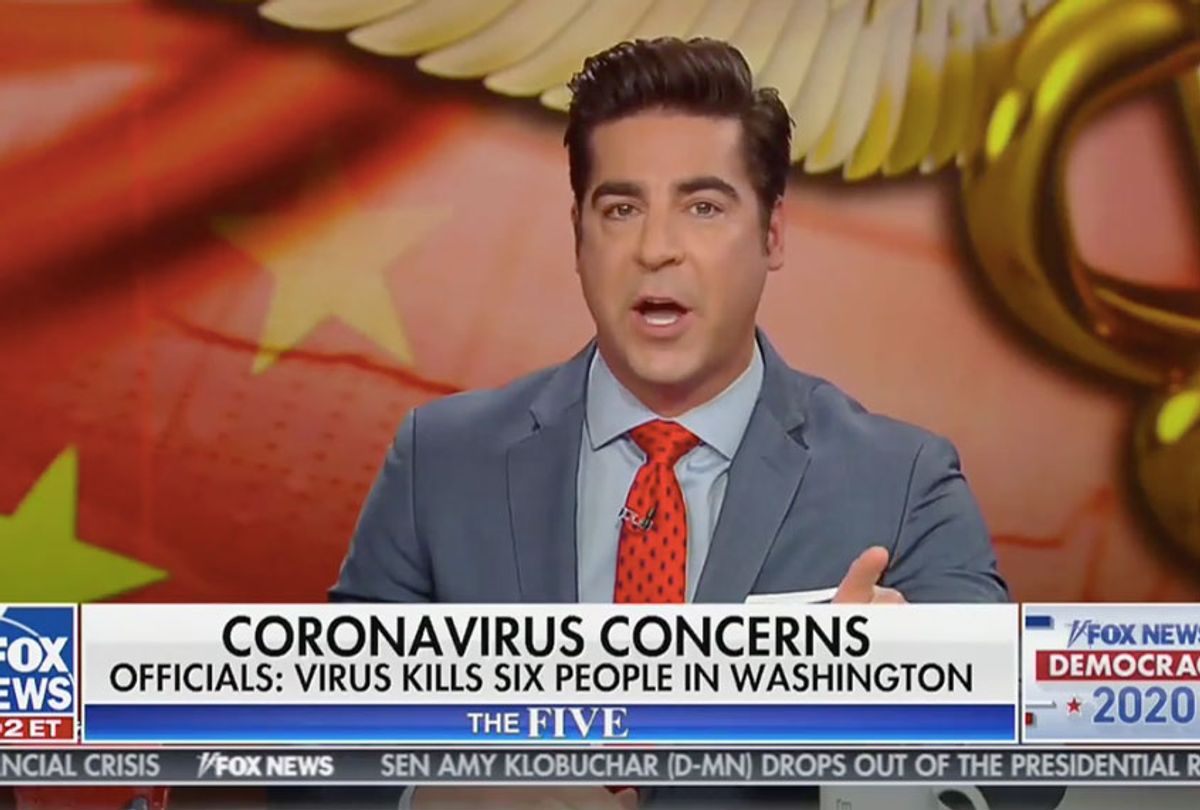 "Let me tell you why it happened in China: They have these markets where they were eating raw bats and snakes," Watters said on the Fox News show "The Five" to the vocal protest of co-host Dana Perino. "They are a very hungry people. The Chinese communist government cannot feed the people, and they are desperate. This food is uncooked, it is unsafe and that is why scientists believe that's where it originated from."

Watters claimed that "the Chinese government has been very deceitful and deceptive in the communicating [sic] the extent of the infections to the world" before concluding that it owed the world an apology.

This is not the first time that the Fox News host has made racist comments about Asians. He also courted controversy in 2016 for appearing in a segment in which he visited a karate dojo in Chinatown, used nunchucks and enjoyed a foot massage. Watters later apologized for the segment, claiming that it was intended as a "light piece" and that he considered himself to be a "political humorist."

Panic over the coronavirus has led to a series of racist incidents against Asians in the U.S. A man allegedly assaulted a woman wearing a face mask in New York, who he claimed she was diseased. A second man on a Los Angeles subway allegedly proclaimed that Chinese people were filthy, and "every disease has ever came from China."

There have also been reports of people of Asian descent facing discrimination in schools and their places of employment, as well as incorrect health warnings telling Americans to avoid Asian food and Asian-populated areas. Most of the stereotypes have played on myths about Chinese food or associating Chinese people with disease and filth. There has also been difficulty in differentiating between people of Chinese descent and those whose lineages can be traced back to other parts of Asia.

"We have a long history in the United States of xenophobia and racism targeting people of Asian descent," Rosalind Chou, a sociology professor at Georgia State University, told Salon by email. "Inclinations to discriminate and perpetuate racial stereotypes about Asians and Asian Americans is rooted in colonialism and colonial projects. In the U.S. specifically, there have been a number of specific anti-Asian laws throughout our history. The policies fix race into place and then fill them with meaning, and people of Asian descent are painted as foreign, uncivilized and alien. And Jesse Watters' comments fall right in line with these negative stereotypes."

Margaret Fung, the executive director of the Asian American Legal Defense and Education Fund, told Salon by email that "racist Fox News host Jesse Watters is at it again." After mentioning his controversial 2016 segment, Fung added that Watters was "invoking false stereotypes about the foods Chinese people eat in order to blame China for the coronavirus. Asian Americans are tired of racist media tirades about a serious public health matter that has nothing to do with race. Bill O'Reilly is gone, and it's time for Fox to ditch Jesse Watters, too."

Scientists have not yet determined the origin of COVID-19, the novel coronavirus that has infected thousands of people worldwide. Scientists currently suspect that it is zoonotic, meaning it likely started in an animal before spreading to humans. More recently, news surfaced today that there are new cases in Germany and California in which the patient had no known risk factors.