I was a liberal guest on Fox Business Network — and, hey, it was totally fine

As part of my personal and political outreach project, I was a guest on Trish Regan's Fox Business show 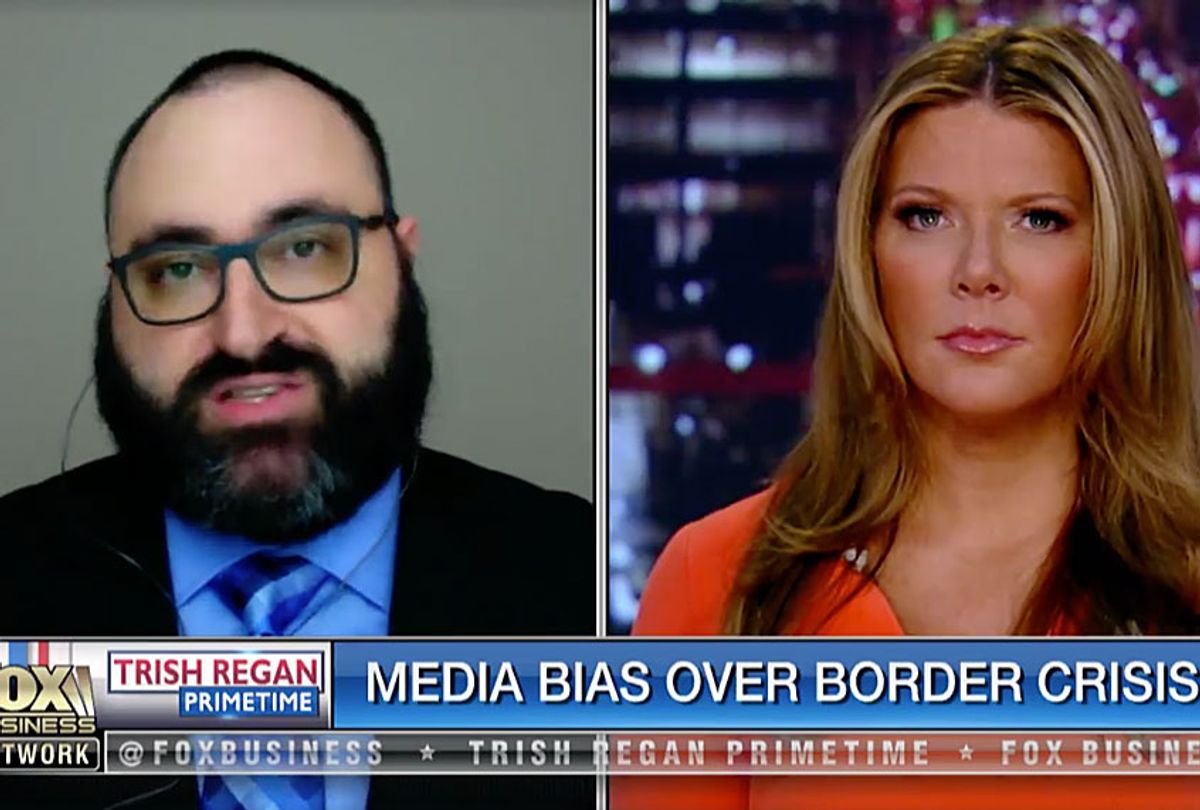 More than a week before Bernie Sanders appeared in a town hall setting hosted by Fox News, I was a guest on "Trish Regan Primetime." What is it like for a liberal journalist to appear on Fox Business Network, a sister network of the conservative-leaning giant Fox News?

Good God, it was awful. When I walked into the studio, I was immediately struck by the shrill sounds of werewolf howls and the pungent odor of sulphur. To my left a cackling sorcerer was stirring a bubbling cauldron filled to the brim with gore. To my right, monsters straight out of a Hieronymus Bosch painting were engaged in a macabre dance, filling me with a terror that I felt in the marrow of my bones.

Except that absolutely none of that is true, though I suspect some Fox-haters envision a reality along those lines. I didn't even go to the studio for my appearance; the producers helped me set things up so the exchange could occur on Skype, where I participated in my conversation with Trish Regan while sitting in my mother's office, which had been my bedroom when I was a teenager.

Regan, who I've interviewed on several occasions, was fair throughout the conversation, whether we agreed or disagreed, and her approach made it easier for me to feel comfortable expressing my own opinions in a civil and thoughtful manner. It was an educational experience, one that goes against the grain of the Democratic National Committee's idea that Fox is a hostile place for any liberal who might dare appear there — to say nothing of being guests at a debate hosted by the network.

This is not to say that I've become a convert to the Fox News philosophy. Quite the opposite: I still believe that most of the ideas propounded by the personalities at Fox News are wrong, some emphatically so (more on that in a moment). The point here is that we as a society need to remember the wisdom best articulated by the Mormon cleric, intellectual and humanitarian Lowell L. Bennion, in a quote he mistakenly attributed to Aristotle, namely, that "it is the mark of an educated mind to be able to entertain a thought without accepting it."

That quote came to mind after my appearance on Regan's show on April 5. She began by saying that both sides in America's political debate have become so impassioned over the issue of immigration at the southern border that it seemed like no one could implement a meaningful solution. She expressed sympathy for the immigrants struggling desperately to get into America and added that "there is nothing mutually exclusive about having a border while simultaneously easing the immigration process so you can bring the right people here. But gosh, you know, that's just common sense."

She added, "Don't you think, Matthew, this polarization that's happened — and the media has contributed to it — is having a detrimental effect on our country right now, and the dialogue?"

I agreed with her: There's a lot of polarization. "I absolutely agree that there are people who have legitimate concerns about border security and they should not all be labeled as racists. But then again, when President Trump announced his campaign in 2015, he classified undocumented immigrants as being disproportionately likely to be rapists, as being disproportionately likely to commit violent crimes. That kind of racially coded rhetoric also creates polarization."

"So it's two wrongs make a right? Because, you know, now you get everybody feeding into this," Regan replied. "And look, you know him by now, right? He's not always as sensitive, perhaps, as he should be in terms of his word choice and usage. But if you look at the intention or the meaning of that, I think his point was there are a lot of bad people coming here, and why are we allowing bad people coming here? There's plenty of good people too, and I'll be the first to say that. I'm actually a big proponent of more people coming that want to engage in all the good things that can happen here in America and want to be part of that goodness. But to say, all right, well we're just gonna pile on because he said it. 'Oh he did it, well I can do it too.' And that really seems to be destroying, I think, the fabric of our country to the point where I worry that we're becoming increasingly ungovernable."

I agreed with Regan there, up to a point, mentioning a recent opinion piece I'd written criticizing the Democratic National Committee for not allowing Fox News to host a presidential primary debates and saying that excessive partisanship was making it more difficult for anyone to govern.

"We need to be able to have these kinds of conversations without finger-pointing, without accusing the other person of being evil or comparing them to Hitler. ... So I absolutely agree with that, I just think it's important for both sides to be cognizant of when their own will commit these mistakes, will make these mistakes."

Regan said that I was taking an "intellectual approach," which I will choose to treat as a compliment. "Unfortunately, these things become too overly political, but I appreciate you engaging in the dialogue. Let's continue it."

I hope to do so, especially as I have found in my conversations with Regan and other Fox figures that they aren't one-dimensional figures. Bret Baier, who along with Martha MacCallum co-hosted a town hall event on Monday with Democratic candidate Bernie Sanders, told me that he's opposed to Trump referring to the press as "enemy of the people." Dana Perino talked honestly about the challenges facing journalists facing consumers who often hold not just different opinions, but fundamentally different narratives about reality. Tucker Carlson, to my surprise, offered a pointed critique of free-market capitalism that would have fit right in at Jacobin, even saying that under the right circumstances he'd consider voting for Elizabeth Warren. Andrew Napolitano was harshly critical of Trump for circumventing the Constitution in his appointment of Matt Whitaker as acting attorney general. And I've interviewed Trish Regan on three occasions, finding her to be an intelligent and committed advocate of human rights.

There are two main lessons I've learned from talking with Fox personalities, and now appearing on a Fox show:

Based on my own observations, I believe that Sanders was right to agree to the town hall event hosted by Baier and MacCallum in Bethlehem, Pennsylvania, not far from where I live. It's important not to write off the millions of people who watch Fox News and its offshoots, nor for that matter the people who express their opinions and/or cover their news on the network itself.

To paraphrase an observation by Barack Obama about the Democrats' have a "circular firing squad": We live in a society where people are going to disagree with us, often on issues that are very important. While lines need to be drawn around truly hateful ideologies and ideas, it is dangerous to place so many ideas outside of those lines that millions would be by implication marginalized from participation in mainstream discourse.

One problem with this attitude is that it makes polarization inevitable; we can work with people who we think are wrong, even dangerously so, but we can't work with those who we dismiss as evil. Another danger is that it causes us to shut out ideas that may go against our ideological inclinations but may happen to be correct. In order to learn and grow as an individual, it is necessary to challenge one's own assumptions when faced with compelling arguments that contradict them. Because human beings are proud creatures, this is difficult enough to do on its own. It becomes outright impossible if you believe doing so means conceding to those you have already characterized as malevolent.

Secondly, the key to moving past our vitriolic political culture — the kind of culture in which, say, Donald Trump refers to media outlets that criticize him as "enemies of the people" or "fake news" — is to distinguish between criticizing the objective consequences of one's policies and the subjective reasons of those who support them.

To use three positions I've regularly seen on Fox stations as examples of where I think conservative positions are wrong: All the reliable scientific evidence indicates that if we don't take measures now to curb global warming, the natural world as we know it will be destroyed. Similarly, all the facts about Trump's proposed border wall indicate that it is a massive boondoggle, intended more to placate Trump's base voters than because it would do anything meaningful to curb illegal immigration.

Finally, Attorney General William Barr's handling of special counsel Robert Mueller's report is highly suspicious. If a Democratic president facing a massive investigation claimed to have been exonerated because his attorney general — one who only got his job because his predecessor was deemed insufficiently loyal — wrote a brief summary of the investigator's conclusions and then refused to release the full report to Congress, Republicans would immediately and rightly cry foul. In that same vein, if the full Mueller report isn't released to the people's representatives in Congress, a dangerous precedent will have been established when it comes to guaranteeing even the powerful aren't above the law.

These, I believe, are the objective facts indicating why the positions often touted on Fox stations are wrong. Yet that does not mean I must conclude that those who disagree with me on these points are morally or intellectually deficient. The character of the person who is wrong must be separated from whether what they are saying is wrong.

We need is a society where ideas compete against each other in an environment that encourages the best ones to thrive. We must have debates that focus on letting the stronger argument prevail based on its merits rather than on each side trying to delegitimize the other. We also need to find those areas of agreement, which can sometimes be surprising, which as mentioned earlier is something I've managed to do with every Fox personality I've interviewed.

That proposition wouldn't solve all of our problems — as long as human beings are fallible, we will live in a world full of injustice, suffering and stupidity — but it is one where the oppressed and the accused, the hopeful and the fearful, the prosperous and the poor and, yes, the liberals and the conservatives will all be heard. It is in everyone's best interest to live in that kind of society, one where you not only have a voice, but will also be listened to, and where you benefit from listening to others.