"This is a democracy," Carlson told Fox News viewers. "It is our job" 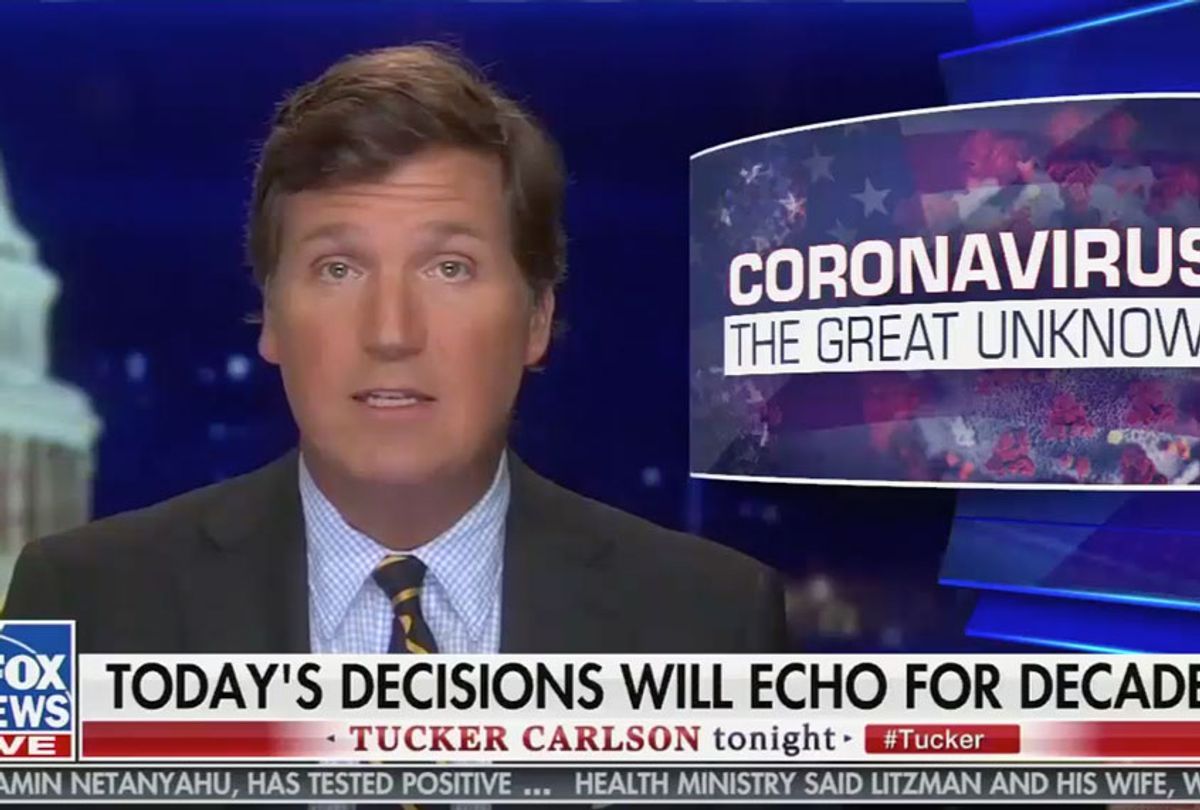 Fox News host Tucker Carlson told viewers Thursday night that public health experts should not make the "big decisions" amid the coronavirus crisis, "because that's not their job."

"What would have happened, for example, if we would have adopted a more conventional response to this epidemic?" Carlson asked his viewers. "What if we asked the elderly and the immunocompromised and anyone else facing statistically higher rates of risk to stay inside cloistered away? And then at the same time allowed the rest of the population to use informed common sense and continue to work? What if we'd done that a month ago? Would the death rate today be much higher than it is now? Maybe, maybe not. We don't know."

He added, "But it's clearly a conversation we should've had before we locked the entire country down and put 10 million people out of work. But we didn't have that conversation. Instead, we outsourced the decision to public health officials. And that's a strange irony of the moment we're living through. One of the main lessons of this crisis is that the public health establishment failed us badly."

Carlson cited two examples where public health officials allegedly failed to rise to the occasion: the ability of the Centers for Disease Control to produce the number of working coronavirus tests necessary to meet the pandemic and accusations that the World Health Organization followed the Chinese government's lead instead of challenging their narrative about the COVID-19 outbreak.

"This is not an argument against expertise. It's not even a populist argument," Carlson said. "Of course, bankers understand finance. Epidemiologists understand coronavirus, far more than most people do. So turning to experts in crisis makes sense, and we should, and hopefully we always will. But we can't allow 'experts' to make the big decisions. That's not their job. This is a democracy. It is our job."

Though Carlson called out public health officials, he did not call out his own colleagues at Fox for disseminating disinformation. Fox News host Sean Hannity complained earlier this month that "I don't like how we are scaring people unnecessarily" and claimed the president's critics were trying to "bludgeon" him "with this new hoax." Lynette "Diamond" Hardaway and Rochelle "Silk" Richardson falsely claimed Monday that the media had inflated the number of COVID-19 deaths in order to hurt Trump. Laura Ingraham originally described Trump's critics as "panic pushers" and inaccurately claimed that the Centers for Disease Control is a "highly politicized organization."

Former Fox Business Network host Trish Regan claimed last month that "this is impeachment all over again. And like with the Mueller investigation, like with Ukraine-gate, they don't care who they hurt. Whether it be their need to create mass hysteria to encourage a market sell-off unlike anything we've seen recently, or whether it be to create mass hysteria to stop our economy dead in its tracks, don't kid yourself. They told us how much they crave a recession as a way to get rid of Donald Trump." (Regan was later dismissed from Fox Business Network.)

A public health expert explained to Salon last week that Trump's response to the crisis made things worse.

"It definitely made it worse," Dr. William Haseltine — a biologist renowned for his work in confronting the HIV/AIDS epidemic, for fighting anthrax and for advancing our knowledge of the human genome — told Salon when asked about Trump's reluctance to acknowledge the severity after news of the pandemic first broke in January and February. "And his reaction was — if not the worst in the world — among the worst in the world. It was dangerous. It was spineless. It was heedless. It was self-serving."

He added, "He should have been warning us it was coming. He should have been preparing by stockpiling all the necessary equipment. But even today we're not doing what we should do. Let me put it that way. What we should be doing is contact tracing [identifying people who may have come in contact with infected patients] and having mandatory quarantines for everybody who's been exposed. And quarantining not at home, but in hotel rooms, single occupancy hotel rooms."