Being Asian in America: How grandma's sponge cake shaped my identity

One writer explores her hyphenated identity and the complicated relationship she has with her parents. 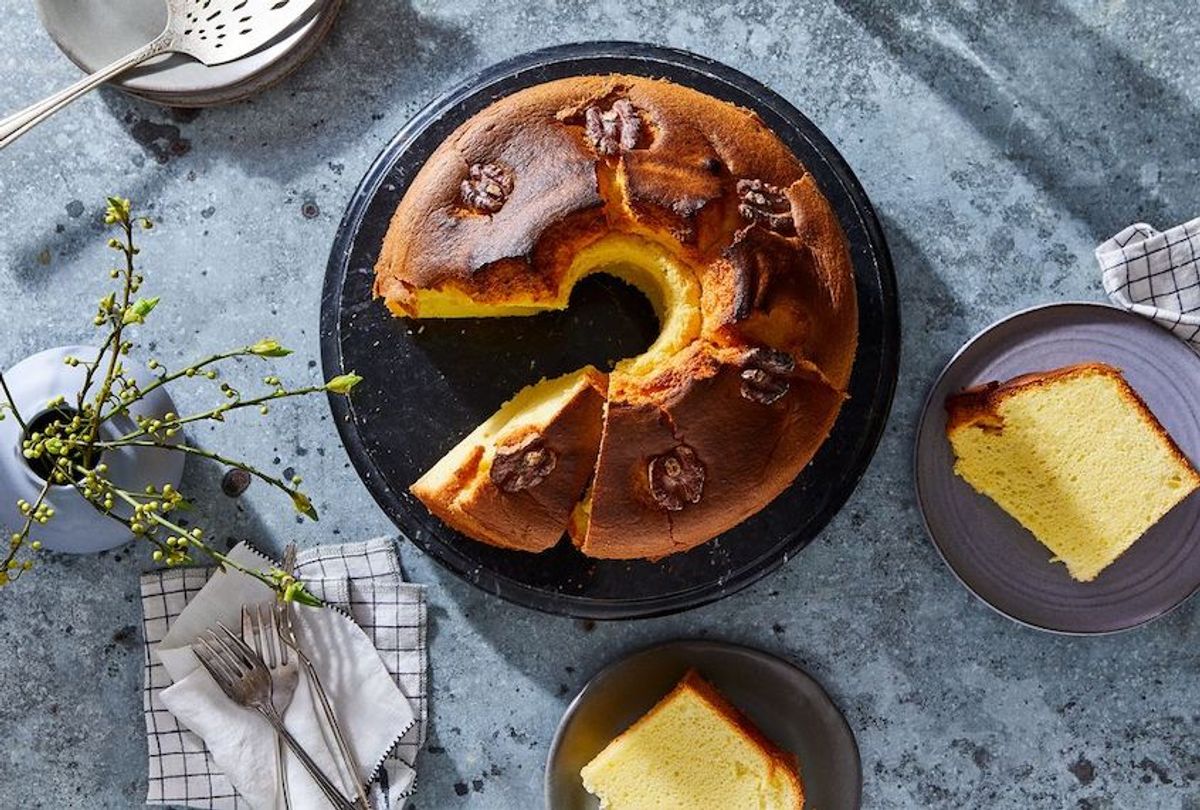 It took my grandma (Popo) hitting her 90s to finally run out of things to do.Before, she'd host big Saturday lunches where there were always six more dishes than there were guests: prawns nestled into glass noodles, their necks primed for snapping and sucking; thick slabs of meltingly tender pork belly, half-submerged in a swamp of braised mustard greens; nests of hairlike fat choy.

If you arrived there mid-prep, none of this would make sense. But it all came together in the end: A stack of golden-fried mantou that threatened to topple into a pool of condensed milk. Soft-scrambled eggs with tomatoes. Octopus and lotus root herbal soup. A mound of sticky rice dotted with mushrooms and lap cheong. And next to the rice cooker of plain white rice, a bottle of Heinz ketchup.

Popo always made every single person's favorite dish, down to the rice and ketchup for my cousin. No reason — just another Saturday at Popo's.

But what I looked forward to most were her paper-wrapped cakes (纸包鸡蛋糕), the kind you'd find at a Chinese bakery. Except they weren't paper-wrapped, but baked in really large nine by thirteen–inch disposable aluminum lasagna pans. And not just one, but four, six at a time — a cake for each and every one of her kids, plus a couple extra for neighbors stopping by, never any for herself.

She was going through Costco-sized bottles of olive oil, flats of eggs. She suddenly had an opinion on cake flour ("Swan brand is best") and extra-virgin olive oil ("Kirkland is a steal"). I'd never seen her bake this much in her life, let alone use the oven for anything other than storage.

After every one of those big Saturday lunches, there'd be a lot of digestive sitting, stray nibbling at these cakes while the adults chatted in Cantonese and the kids in English. I'd peel the walnut off my pillowy square of cake, then the layer of golden crust, peeling and peeling away, letting the seemingly endless layers of sponge dissolve on my tongue like snow.

Throughout elementary school, I was bullied for being Asian. My mom's advice was always the same: They're just jealous of you.

To cheer me up, I'd ask her to tell the story again about how she got her dog: How it was so funny and odd that her Black and Jewish classmates would call her names, and spit at her and her siblings, running them all the way home from Delancey Street to the Prospect stop in Brooklyn. How her dad had fled the Cultural Revolution, literally fording rivers to get his family here, to America, only to find his medical license didn't transfer, so he had to do schooling again. (He became a doctor for the second time, at 62, then retired two years later at the bidding of his four children, themselves in med school, because he was getting stomach ulcers.)

She was working at a jean factory in the Lower East Side, getting paid 10 cents per pair, and one day sewed a needle right through her thumb. And so her mom, my Popo, got her a dog to cheer her up.

I think it was when I turned 15 when my parents and I realized how different we were. We fought a lot. It felt like, overnight, we had ceased to share a common language or understanding of our world. And in hindsight, it's true: We have had very different experiences as Asians in America. Like many other children of immigrant parents, I found it difficult to connect with them and vice versa. I'm overly trusting; they're overly cautious. I'll wear a new shirt out of the store; they still have drawers of unwrapped shirts from the 90s.

Compared to my dad's leaving everything and everyone he knew to move to England (and then again to America), and my mom's fleeing China in search of a better life in Chinatown (only to continue to be chased out, back over the Brooklyn Bridge), my made-in-America issues — not fitting in at school — looked and felt to them, well, like child's play.

But on Saturdays at Popo's, everything was easier. Maybe it was because my parents and I would revert to our younger selves (them as children of a matriarch, me as the baby to be doted on). Or, because it was only at Popo's where we knew how to sit still, together, and eat too much cake. Or because we had this one thing in common, this thing that we all loved so much: my grandma, their mom.

Whether it was Popo getting older, or someone just realized it was insane how much she cooked each time we visited, the Saturday lunches have in recent years become takeout. Now we go to Lincoln or Sea Harbor or NBC — whichever dim sum restaurant's recently changed owners, or become "not bad" again, or brought back the pineapple chicken buns (named so not because any pineapple is used, but because the sugar cookie–like topping resembles the fruit's cross-hatched skin).

I haven't seen my grandma don her apron in a while. There's something simultaneously relieving and heartbreaking about it: our matriarch finally sitting while she eats, letting one of us cut the sponge cake for dessert, taking a sliver for herself.

There are other dishes, of course. What about my dad's soft scrambled eggs with sugared tomatoes? Or my mom's see yau gai (which I called BSC growing up, short for "Brown Sauce Chicken," because I was too embarrassed of Cantonese to try)?

It feels not quite right, then, to pick Popo's sponge cake as my family recipe. But that not-quite-rightness, the love or metaphor of this Chinese bakery sponge cake made with Kirkland olive oil and Swan cake flour — yellow on the outside, white on the inside — clumsy in translation, does feel right. My family, like other immigrant families, has a hard time with love — showing it, giving it, accepting it, saying it. But what we lack in our ability to express love, we make up for with really, really good food.

While we're texting more heart emojis now that I'm solidly more than 3,000 miles away, on a recent visit home, my dad kissed me on the forehead in a move that startled and repulsed us both.

It's not what we say, but how we say it: Like how Popo always made everyone's favorite dish, even when it didn't fit on the table. Or how my mom is hard on me, because no one can spit on you if you're flying a little bit higher. Or how, the rare times we do have dinner together as a family, my dad silently lays the most tender part of the fish on my bowl of rice.